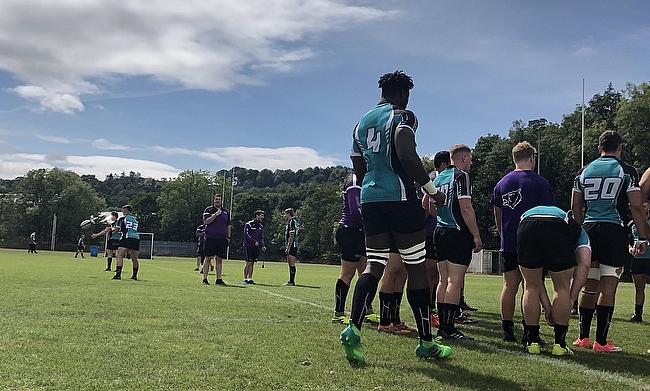 Kerry Wood believes Leeds Beckett’s recent pre-season fixtures against National League clubs were a great test for his side.

Beckett, coached by Wood and Director of Rugby Colin Stephens, impressed earlier this month in games against Hull Ionians, Sedgley Park and Huddersfield who all ply their trade in National Two North.

The BUCS Super Rugby outfit showed their qualities at Lockwood Park which was highlighted by an outstanding 49-7 win over Huddersfield.

And Wood, who has been involved with Ionians as well as National League sides Blaydon and Harrogate in the past, admits it was beneficial preparation for Beckett ahead of the new University Rugby season.

“It was really pleasing” said Wood. “That was our first proper hit out. We have been working on the way we want to play this year quite a lot in pre-season so it was really good to see some of those things being implemented and it was great to see us get some success from that.

Good hit out today for @LeedsBeckettRFC v @Ioniansrufc @SedgleyTigers and @Huddersfield_RU, thanks for the great hospitality after. Good luck to all for the season ahead.

“It is a difficult one for us at BUCS Super Rugby level especially at Leeds Beckett. When you start comparing against Loughborough, Hartpury, Exeter or Cardiff Met, they all have Saturday teams.

“They can chop and change a little bit with their BUCS squad and their first team squad, but we don’t have that luxury.

“Unfortunately, because of the way it works, no other university outside Super Rugby will be willing to have a pre-season game with us because they purely can’t get students in till at least September which is totally understandable.

“We knew we needed to get this type of fixture within a pre-season plan in order for us to be ready come the start of the season so it was a great test for these young players.”

Wood also feels that playing fixtures against high quality opposition is exactly what Beckett should be aiming to do as they continue to develop their rugby programme.

“We want to push our players at Leeds Beckett,” he added. “What underpins our senior squad is that we feel we offer a pathway to professional rugby for players.

“To be able to go out there and do well against three sides that have probably been in pre-season three or four weeks longer than us was credit to the team because in my view, we came out on top.”

Beckett have also kept the majority of their squad from last season with the likes of Trystan Lloyd and Sam Allan becoming some of the latest players to move from university rugby into the professional game.

Both have linked up with Championship side Yorkshire Carnegie over the last couple of years and Wood is pleased to see Beckett’s pathway continue to flourish.

He said: “I would say we have been lucky because we have retained most our squad from last year. A couple of those people which we have lost have gone on to sign professional contracts which is really pleasing from our end because it is what we are trying to provide.

“It is about getting a good education as well as living the dream and chasing the egg! Long may that continue. We are at the early stages of our programme, but we are going in the right direction.”

On the field, it looks like Beckett are also heading down the right path. After a disappointing maiden season in BUCS Super Rugby – which saw the Yorkshire outfit lose all 14 of their domestic games – there was a vast improvement last term as they finished fourth before being knocked out in quarter-finals by eventual winners Hartpury.

The new BUCS Super Rugby season begins at the end of September with Beckett travelling to the University of Exeter, but Wood has revealed the 2015 champions are not setting any targets for this term.

He added: “First and foremost, university rugby is a transitional cycle. That is part and parcel of the programme. In our first year, we lost every game but that was a transitional year for us.

“We addressed those issues and recruited pretty well last year. Our goal was to first of all to win a game!

“We certainly exceeded our expectations so hopefully this year with a few new guys coming in and keeping the same squad, we can do better this season because we are building well.

“I am not going to talk about Championships or winning things because we don’t speak about that stuff at the minute.

“It is just making sure that we’re working hard, being honest and looking after each other. As cliché as that sounds, that is what we look at.

“It is all about the people in our environment being happy and developing. That takes a considerable amount of planning to create that culture. All we want is the boys to enjoy themselves on and off the field and enjoy their rugby.”