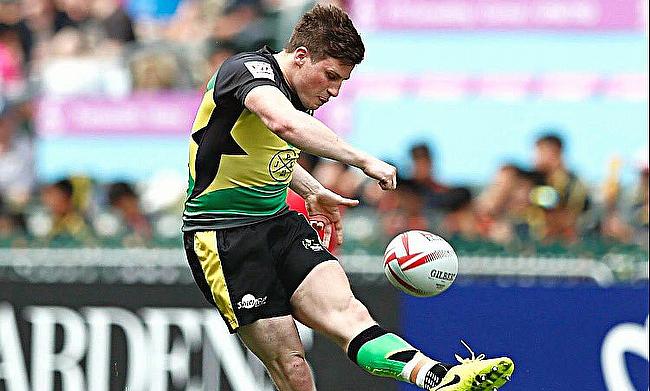 Jamaica are ready to announce themselves on the world stage once again.

The likes of Usain Bolt, Shelly-Ann Fraser-Pryce and Elaine Thompson have put their country on the sporting map due to their achievements in their individual sports, but this weekend, Rugby Sevens will be hoping for a slice of that success.

While Bolt, Fraser-Pryce and Thompson were winning medals at the Olympics in Rio two years ago, the Crocs were beginning to build as a Sevens team with the aim of establishing themselves as a competitive side.

Rhodri Adamson, who was one of the original members of the squad, reflects on the first time he met up with the team in London after getting in touch with captain Conan Osborne.

“My Mum was born in Jamaica because my Grandpa was out there with the army,” says Adamson. “A friend shared Conon’s social media message that they were on the lookout for Jamaican qualified players, so he obviously knew my background.

“He sent it across and I got in contact with Conan. Two or three weeks after, I was training with six or seven players which wasn’t very many at all. We didn’t have any water bottles or anything like that and when you look at us now, we have a training squad of about 20/30 players.

“It has been an amazing journey watching the profile grow. There is a huge amount of pride being one of those players throughout the rise.”

The growth which Adamson refers to has reached its peak over the last year. In November 2017, Jamaica secured their place in the Hong Kong 7s qualifiers, the recent Commonwealth Games and this weekend’s Rugby World Cup Sevens in San Francisco.

“It is amazing really, says Adamson. “When the qualification came through at the end of last year and we found out we were going to the CAC [Central American Caribbean Games], the World Cup and the Commonwealth Games, the one that stood out for me was the World Cup.

“We set out a five-year plan and we are in year two of it now. We are already well ahead of where we wanted to be in terms of qualifying for these three events and to be the first ever Caribbean side to qualify for the World Cup is amazing.”

While Jamaican rugby is currently going through their journey, Adamson is also experiencing his own.

A graduate from Newcastle University, he has played at Twickenham for Northumberland, tasted Premiership 7s with the Falcons in front of the BT Sport cameras and he has also represented England at both country and students level.

Amongst all of this, Adamson has continued to ply his trade in different tiers of the English XV-a-side game. Beginning with Blaydon in National One, he then made the move to now Championship outfit Coventry, but his time in the Midlands nearly led to him giving up on the sport.

“It has been a rocky journey for me over the last two years, adds Adamson. “Coventry was a funny one for me. I started off by getting a lot of game time and was improving, but then I had a dark period and I didn’t get selected and I didn’t agree with a few things that we going on.

“I almost wanted to give up rugby. I was sacrificing a lot and heavily thought about canning the game in for a few years.”

Adamson decided to stick with rugby and a move into the second tier with Richmond followed. He is now thriving at the Athletic Ground as the club look to solidify their place in the Championship and whilst the playmaker is looking forward to the upcoming XV-a-side season, the focus, for now, is all on Jamaica.

The popularity of rugby in Jamaica can only be boosted by their appearance at the World Cup this weekend and the Sevens game is certainly growing in the Caribbean. Athletics may well produce some of the stars of Jamaican sport and it is one of their sprinters which has lifted the Crocs into the spotlight over the last couple of weeks.

Warren Weir, who won bronze in the Men’s 200 metres at the London Olympics in 2012, will feature for Jamaica Sevens over the next month at the CAC games in Colombia as he looks to try his hand at a different sport.

“The future of Jamaica rugby is going to come from the island and that’s massive,” adds Adamson. “The sport is really growing over there. Social media followings are helping and a lot of people are getting involved because they understand the sport a bit more, plus us qualifying for events is only adding to that.

“Warren Weir’s story is certainly helping us raise the profile and it has got some more momentum on the back of our successful year.

“Rubbing shoulders with USA’s Perrie Baker in the lift highlights this. He’s laughing and joking saying he’s getting called out on Twitter by every man and his dog about who will be quicker so people are actually starting to think that there is potential for Jamaica rugby.”

Jamaica have prepared for the World Cup with tournaments in the UK, including competing in the Super Sevens Series, but their first real test came on the Gold Coast in Australia during this year’s Commonwealth Games.

They did finish bottom of Group B which contained Australia, England and Samoa, but Adamson admits the experience in Queensland has only spurred them on for San Francisco.

40 captains gather in San Francisco ahead of what is set to be a truly epic #RWC7s pic.twitter.com/ju7YSo5yQn

“This is the tournament we have been eyeing up,” he says. “We have known for around two months that we will play against France so the focus has been on that game on Friday.

“They haven’t been in the greatest form recently and we have a good balance to the squad. We are ready to make some shocks. Everyone is raring to go. We are hoping it all comes together.

“It is a massive for us. France are a big player in world rugby so any big names Jamaican rugby can scalp it is only going to do us favours.”

Adamson reveals the long-term goal for Jamaica is to be competing regularly on the HSBC World Sevens circuit, but for now, it is all about this weekend at AT&T Park.

The World Cup has been on their minds for over nine months and it is time for this generation of players to have a summer to remember, just like the superstars of Jamaica sport are regularly accustomed to