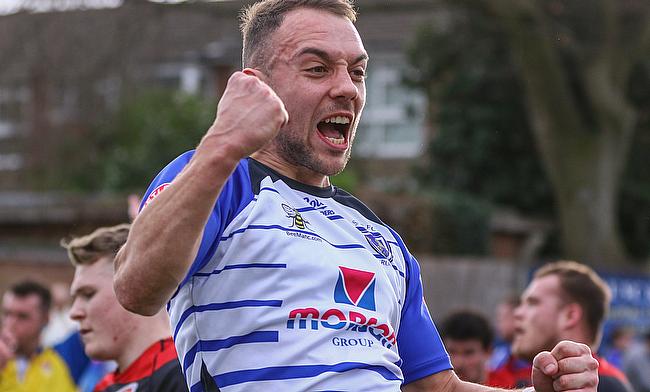 After talking to Rugby Hungary Performance Director Richie Williams, we also spoke to Matt Bradley who plays for Sale FC and qualifies for Hungary thanks to a grandparent.Photo Credit: (Gareth Lyons)

The scrum-half is part of the Hungary team that will be playing in Colomiers this weekend with the hope of getting to the Olympic Games next year in Japan and Bradley is excited for what the weekend has to offer in France.

“It’s exciting more than anything. Obviously, it’s a massive opportunity to play France in France, so hopefully there’s a decent crowd there. For us, we want to go out there and do ourselves justice. The only pressure on us is to perform well, so let’s see where that takes us.”

Flying out to Toulouse just three days before the tournament is due to start, Bradley admits that he is looking forward to linking up with his international team-mates once more: “I know the lads have trained this weekend just gone, sadly I had work and I meet up with everyone on the 10th. Ideally, I’d like to spend every camp there, but that’s not always possible.”

Not a stranger to the international scene, Bradley represented Italy in rugby league before transitioning to rugby union, playing for Macclesfield before his move to Sale. Having enjoyed a good season in National One, Bradley will be missing out on the first week of pre-season to be in France representing Hungary.

Preparations for the new #Nat1 season will be put to one side this weekend as Cambridge Director of Rugby Richie Williams aims to guide Hungary to the Olympics Games…https://t.co/S655J82qHp

Approaching Williams after Sale and Cambridge’s 36-36 draw at the start of last season, Bradley acquired Hungarian citizenship quickly and was representing his nation by November in the autumn Tests. Despite a quick transition to international rugby, Bradley says that he wasn’t intimidated by being thrust into a new environment.

“Obviously I knew Richie and Gareth Lloyd (sevens head coach) who is coaching now, so I knew they could speak English,” he said. “I don’t really get put off by stuff like that. I’m normally quite outgoing, so I sort of just got on with it, but I didn’t really know what to expect.”

This tournament marks the highest level of competition that Hungary will ever have played at. In the same pool as France, Portugal and Italy, Bradley was quick to point out that every smaller rugby nation has to start somewhere.

“I don’t think many people associate rugby with Hungary,” Bradley said. “We look at the group that we’re in, but that’s probably the same for a lot of nations initially, obviously not the core nations, but the likes of Portugal and Spain.

“They’ve been through a similar process over a number of years now, but they’re much more mature nations than us. You’ve got to start from somewhere haven’t you? This can only help really.”

Describing the Hungary Sevens side as playing an ‘expansive’ game, the excitement in Bradley’s voice was clear to hear. After this weekend, it will be back to normality for the scrum-half and with a National One season just less than two months away, Bradley believes that Sale will improve on their 11th place finish from last term.

“We know that we’ve got a talented squad, but I know that we want to get better and better,” said Bradley. “The important thing is that it was our first season in National One, it’s just a different kind of game to National Two.

“After Christmas, we really turned a corner and by securing that place in National One with two or three weeks to go, was not a bad achievement for our first season there. If you look at the results from last year, anyone can beat anyone at any given weekend. It’s very nip and tuck. We have signed some good players as well so hopefully we can improve and finish higher up the table.”