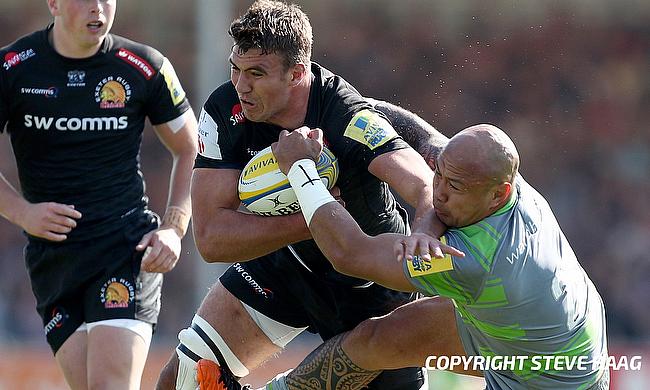 Sam Skinner very nearly gave up on rugby. At 18 and having left school in 2013 without being picked up by an academy, he was all set to jet off on a gap year before looking at other ventures.

Fast forward to present day and the Exeter Chiefs forward, who celebrated his 24th birthday this week, is a Premiership and LV Cup winner, an U20 World Cup Finalist, has three Scotland caps to his name and is poised to make his Six Nations debut after being named on the blindside to face Italy this weekend.

Luckily for Sam, Exeter and Scotland he chose to give rugby one last chance back then, joining Taunton Titans in National Two South, before being offered an academy contract by the Chiefs shortly after, all of which has led him to where he is today.

“When I was younger, I had sort of given up on the idea of playing international rugby, just because of my size and the way my rugby was going,” Skinner said. “It was only because I had that late growth spurt where professional rugby came into my mind.

“It’s not something I’d even considered until I got the phone call from Gregor [Townsend] over the summer, you obviously grow up dreaming of playing for your country and I grew up supporting both Scotland and England equally, but I never thought I’d have to pick between the two countries, then when Gregor called it was a no brainer, I couldn’t believe the opportunity.”

?? | We caught up with debutant Sam Skinner as he watched back some of the best moments from his first Scotland cap against Fiji ??????????????#AsOne pic.twitter.com/4f3SDftTJc

The last point Sam makes is a particularly absorbing one. Born and raised in Exeter with his father hailing from Ayr, he was called up to England’s Under 20 squad ahead of the 2015 U20 Six Nations, having previously been involved in the Scottish Exiles programme, and he went on to appear from the bench in that year’s World Rugby U20 Championship Final.

After some fantastic club form over an extended period of time, he was widely touted as a potential international and it was Scotland who came calling last autumn, with the U20s to be the final step on his England association. Despite England seemingly nonplussed at his ability and potential, there was still a decision to be made, though Sam knows he made the right choice for him, something which certainly pleased Dad, Peter.

“Once you’ve finished U20s, that’s it until the senior team so you sort of have to work your way up through the Premiership which I felt like I was doing and then England can come calling if they feel you deserve the opportunity,” he added. There was a few conversations but nothing major.

“I told my Dad and he was obviously very proud, but he was adamant that he would take a step back and let me make the decision, which was slightly annoying as with such a big decision in your life you kind of just want to be told what to do and take all the pressure off of yourself! But he wanted to just not influence my decision at all, but I’m sure he’s very happy I chose Scotland that’s for sure, as am I.”

There have been a number of key influences and mentors who have helped mould the Exeter Chiefs and Scotland star who fans see today. His time playing for Taunton in National Two South and then for the University of Exeter, whom he captained to BUCS Championship in 2016 whilst studying for his first-class business degree, were key in his development.

Those formative years saw Sam continually learn and improve his game whilst increasing his physicality, allowing him to become the key member of the Exeter pack which he is today.

Skinner added: “The Taunton Titans coaches Chris Brown and Tony Yapp were very influential in me developing as a rugby player, they were fantastic coaches and are still the coaches there now.

“Then as I moved onto Uni Rugby, I had Damian Welch along with Haydn Thomas and they helped me develop my game as well as Keith Fleming who was DoR.

“It gave me two-three years to add to my game, get used to my size and get bigger gradually so then when I finished University, I was at a physical state ready to compete in the Premiership.”

It’s been a remarkable and rapid rise for the Devonian, who has taken every step throughout his career in his stride with boundless energy and intensity.

Since his Exeter debut against Gloucester in the LV Cup back in November 2014, Sam has added the aforementioned silverware to his rugby CV and become a Chiefs half-centurion following the recent Munster match, though he wasn’t aware of that fact prior to our conversation, underlying his insistence that his performance in his next game is always the priority. “Have I really? I’ve got 50 appearances for Chiefs? I didn’t know that, that’s pretty cool.”

He made his Scotland debut back in November in a man of the match display against Fiji at Murrayfield, looking every part the seasoned test player. Two further appearances against South Africa and Argentina came in the following fortnight and Skinner was suddenly a fully-fledged international who looks right at home amongst a vastly talented Scotland squad.

“I’ve really enjoyed it so far, it’s obviously very physical and very quick and the atmosphere is unbelievable,” he said. “The 80 minutes sort of fly by, it’s all been a bit of a whirlwind to be honest, I’ve just been trying to keep my head down and crack on through it but I’ve been loving it.”

After appearing at lock in his debut, Sam then shifted to 6 for the South Africa game before returning to the second row from the bench in the Argentina match, something which he has become accustomed to during his time at Sandy Park.

On top of his abrasive defending, strong ball carrying and adept lineout calling, Skinner’s versatility is another string to his bustling rugby bow. Scotland Head Coach Gregor Townsend has been open about his desire to have as many players as possible be able to comfortably play in those positions, which Exeter Director of Rugby Rob Baxter has allowed Skinner to achieve with his team selections.

Gregor Townsend admits Scotland had been tracking Sam Skinner “closely” before naming the 23-year-old in his squad for the upcoming Autumn Tests.

Skinner continued: “I’d say I’m more of a second row in the role that I play and the way I play, but whether I wear a 4,5 or 6 on my back, it’s not going to change how I play the game. I’m more used to playing second row, but with the way it’s gone for Exeter recently and playing 6 for Scotland against South Africa, I just enjoy having that versatility and as long as I’m picked I’m not bothered to be honest.”

Wherever deployed Sam has added incredible value to whichever side he’s in. He currently finds himself part of a Scotland squad who have been bubbling away and will be quietly confident heading into this year’s Six Nations, with the spotlight firmly on the other home nations.

This year’s edition of the oldest rugby championship looks set to be one of the most fiercely contested in recent memory with three of the world’s top four sides contesting in Ireland, Wales and England. France are as unpredictable yet capable as ever, whilst Italy will be hard pushed to put a stop to 17 successive tournament losses.

That leaves Scotland who after a difficult and fallow period, have improved tenfold over the past few years building squad depth and securing a string of impressive results along the way. Fullback Stuart Hogg, who will be Skinner’s club mate as well as international colleague next season after agreeing a move to Exeter from Glasgow, emphasised the renewed belief Scotland have in their ability in stating that they believe they can win the Championship, an intent which Sam fully endorses.

“100%, we definitely believe we can win it as I’m sure all the sides do”, Skinner claimed. It’s a very exciting place to be, our main focus is Italy now but we know what we’re capable of doing and we want to put in our best possible performance.

“We’ve looked at the long-term goal and obviously we want to be competing at the top of the Six Nations, we believe and know we can do that. But we don’t want to look further than Italy right now, that’s our pure focus right now and just the first 20 minutes of that game is all we’re focusing on.

“From a fan’s perspective, I’m sure it would be very easy to say that it’s an easy game first up but that’s not the mindset at all, they’ve got world class players and an Italy-Scotland game is always a massive clash for many reasons really. The main thing is we’re playing at home in front of a sell-out BT Murrayfield, any Six Nations game is a titanic battle so I’m expecting a huge game.”

The Italy game will be one of three home matches Scotland have during the course of the Six Nations, with further clashes against Ireland and Wales to come, which could be a huge boost to their credentials having won 10 of their last 12 tests at Murrayfield. On the flip side, they will travel to the Stade de France and Twickenham for away ties, venues where they haven’t won since 1999 and 1983 respectively.

Head to head! @Scotlandteam host @Federugby on Saturday to open their #GuinnessSixNations Championship!

Whilst all sides have been injury hit as is always the case, Scotland appear to have particularly suffered with a number of frontline players absent including the likes of Fraser Brown, Hamish Watson and John Barclay. Although this may have been potentially disruptive to preparations, it may be an ideal time with the World Cup looming, allowing for fringe and lesser established players to thrive in the environment in the build up to Japan.

Squad depth is at an all-time high for Scotland which stands them in good stead with the year ahead, allowing the likes of Skinner to push their case for selection in Townsend’s strongest side.

“Rugby is a brutal game and naturally we’ve been hit, you’d probably say in the back row particularly, meaning Gregor and the coaches have had to adjust their team accordingly but we’ve got that strength in depth now,” Skinner added.

“Competition for places is really really tough. The two XVs that Scotland could put out from this training squad we’ve got are both equally as strong. It makes for very intense training sessions and I suppose tough selection problems for the coaches.”

It’s been a steady climb for Scotland from cast asides to where they are now and 2019 may well be a breakout tournament for them. the same can also be said for Sam Skinner himself, from a rugby career which was very nearly a non-starter he is now set to play in the tournament he grew up watching. Whilst he isn’t one for setting targets, he can take pride in all that he has achieved.

“It hasn’t really hit me that I could be involved, it’s pretty crazy when I think about it. I’ve obviously grown up watching a lot of Six Nations and to have the opportunity to play in such a prestigious competition I feel very lucky, that’s for sure.

“There’s no magical ingredient, there’s no amazing goal setting that’s done for me personally, I just take each game, try and play as well as I can and enjoy the ride really.”