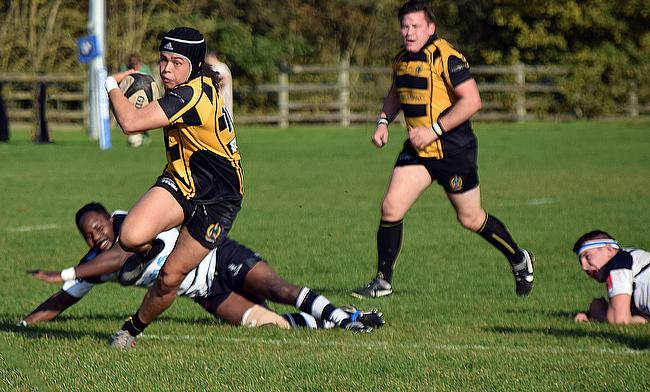 At the beginning of this season, Jacob Umaga may not have expected international recognition to fall his way. Neither, it seems, did his family as Mum, Michelle, cut short a phone call with the Wasps fly-half when he told her he had been named in England’s squad for the upcoming Six Nations. (Photo Credit: Steve Wells)

“His Mum pretty much told him to stop talking nonsense!” Mike Umaga, Jacob’s father, tells TRU. “He had to ring back again. My wife actually hung up on him because she didn’t believe him!

“He rang back and said he’d actually got in! He said he been added to a WhatsApp group he didn’t know about and then he saw the names in there. That is when the shouting started!”

A close-knit family steeped in rugby history with Dad, Mike, representing Samoa and uncle Tana winning 74 caps for the All Blacks, Jacob would have been tipped for the very top from the moment he first picked up a rugby ball, but just under two years ago, his career was at a “crossroads”.

As part of his academy contract at Wasps, the former Kenilworth School pupil linked up with uncle Tana in New Zealand to represent Auckland in the Mitre 10 Cup in order to boost his game-time opportunities.

“It [his rugby] was at a bit of a crossroads at Wasps,” says Mike. “We were thinking whether he would kick on and he still had six months left on his contract so we felt that maybe we should give him another opportunity and a different outlook on rugby.

“It was a matter of getting on the phone and ringing his uncle and saying we were quite keen to get Jacob over there just to go and see what New Zealand rugby was like. I grew with it and I always talked to him about New Zealand rugby, but he hadn’t experienced it!”

🌹 What would your reaction be if you were added to a WhatsApp group with England players?!

🎥 Find out about the moment @jacob_umaga98 learnt of his England call-up! pic.twitter.com/CubThHfoCl

As a 19-year-old, moving to the other side of the globe would have been a daunting prospect and suffering a broken arm during his spell in Auckland wouldn’t have helped matters, but the experience he gained in New Zealand has helped shape Umaga into the player he is today, according to his Dad.

“We were fortunate as well that at the time, Tana was in Auckland and coaching the Mitre 10 team were two guys that I had played rugby with, Alama Ieremia and Filo Tiatia, so he had a lot of experience around him,” adds Umaga.

“He had to go over there by himself so he had to do a bit of growing. I think the turning point, certainly for me, was when he broke his arm. He could have easily come back, but we discussed it and said that he had got some time to enjoy himself and do everything the programme had to offer.

“Having to fend for yourself, making those decisions and having to endure tough times were difficult for him. With us being so far away from him, there were a couple of tears shed but he stayed the course and I think it has paid off.”

Before his move to New Zealand, Umaga sampled his first experiences of senior rugby and did so at National Two North club Hinckley.

The Hornets had just been promoted into the fourth tier and having plied his trade at Leicester Road during the first half of the 2016/17 campaign, he certainly made an instant impression on head coach Chris Campbell – with one moment in particular.

“There were a couple of tries he scored; one that comes to mind was against Preston Grasshoppers,” says Campbell. “He got the ball about 35 metres out and before you knew it, he had stepped two and he was under the posts. None of us could quite believe he had done it!

“I think there was always the hope he could go far. I think what Jacob had to do was to shake off the impact of a very famous name. That brings expectation and at times, very unfair expectation. Every player is different whatever your family links are. At the age of 18, he was certainly demonstrating the core attributes and it was very, very evident the natural talent and skill that he had. It was a case of, to a certain extent, waiting to see how he developed mentally and physically and I think his move to New Zealand helped him really mature as an individual.

“I really pleased for him but also for his family. His Mum and Dad trekked him around the country for however many years and whenever Jacob was with us, his family were always at every game. That was a really good feeling as well.”

All of his experiences, both in England and New Zealand, have helped Umaga break into the Wasps first-team set-up this season.

Umaga kicked off the campaign in style at the Premiership 7s when he scored a record 61 points for Wasps in the annual curtain raiser at Franklin’s Gardens and he also starred for the club in the Premiership Rugby Cup.

A domestic league debut against London Irish followed in October and man of the match performances in Europe, and most notably at Ashton Gate against Bristol Bears, clearly caught the eye of Eddie Jones.

Now, Umaga is part of England’s plans as the national team look to put their World Cup disappointment behind them in the forthcoming Six Nations.

Time will tell to see whether Jones hands Umaga his first cap during the Championships with the Wasps man likely to be behind Owen Farrell and George Ford in the pecking order, but if the 21-year-old was to make his international bow, there will certainly be more shouting and screaming from the people who have helped Umaga along the way.

“We are really proud to have had Jacob with us but at the same time, Hinckley has been a tiny, tiny part of Jacob’s development,” adds Campbell.

“Hopefully we have managed to make a really small difference as a part of that and I think that can be the role of National League clubs if they are set up and run in the right way. It will be pretty cool if he ends up on the field at the same time as Manu [Tuilagi] with him being a Hinckley boy!”

“I don’t think you can put it into words,” adds Mike. “Rugby has always been a part of his life ever since he was a kid. I remember showing him his first rugby video and it was the Barbarians vs the All Blacks from 1973. The plan was to put him in a black jersey, but I think that is gone now!

“It will probably still be quite surreal [if he does gain an England cap], but we will all definitely be happy and proud of him as will my family back in New Zealand. We are looking forward to that day, but at this moment in time, it is just about him being involved, getting to grips with that and that will be enough.”