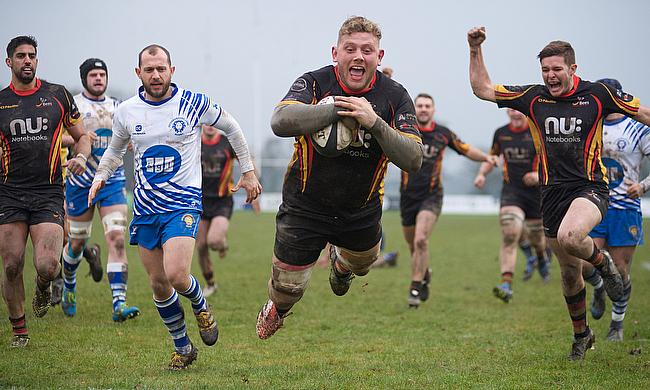 Pete Glackin admits the word ‘promotion’ is not mentioned amongst the Birmingham and Solihull players despite the club sitting at the summit of Midlands Premier.

Their fixture this weekend against Sandbach fell foul to the weather, but the Bees have won all 12 of their matches so far and remain 11 points clear at the top of the division.

“We want to finish higher than the fifth place we achieved last season,” said the Bees Coach.

“We don’t mention the word promotion. We have put ourselves in a good position, but speaking about it creates pressure. We are ambitious, but we just want to better what we managed last year.”

The Midlands outfit broke their club record of 11 games unbeaten at the start of the month which is yet another sign of progress for the side that were relegated from National Two North in 2015.

Since they dropped out of that division, there have been a number of changes at Portway, but at the beginning of last season, Glackin and his coaching staff started to steer the Bees back in the right direction.

“It has been hard work to get to where we are now,” added Glackin, who began his playing career at the Bees. “When I came in, I tried to change the all-round culture of the club.

“We wanted to blend in new players, but we have made no spectacular changes. For me, it was about building squad morale and togetherness and our hard work in pre-season for this year highlighted that.

“We know we have not achieved anything. We are keeping our feet on ground, but credit to the boys for a good start to this season after a good year last year.”

The Bees have score 598 points this term – including a 100-0 thrashing of Old Halesonians at the end of last month and conceded just 154 which Glackin knows is a superb record to have heading into the Christmas break.

Glackin’s side complete the calendar year with a trip to Bourneville next weekend, but even though the Bees have been earmarked for the Midlands Premier title, he insists they are not focused on what they have achieved so far.

He added: “We are not stats driven. Yes we have a confident group of players at the moment and we have scored a lot of points, but we cannot think our job is done.

“The transition from last season to this year has been an excellent and we have learnt from all the changes that have been made in recent times and we are now in a good place.

“But, we want to make sure we stay in that good place and we are taking each game and each weekend as it comes. We don’t want to create pressure, but we do have the belief and trust in what we do.

“There are different ways to look at it and it would be nice to go into the New Year still in good form.”