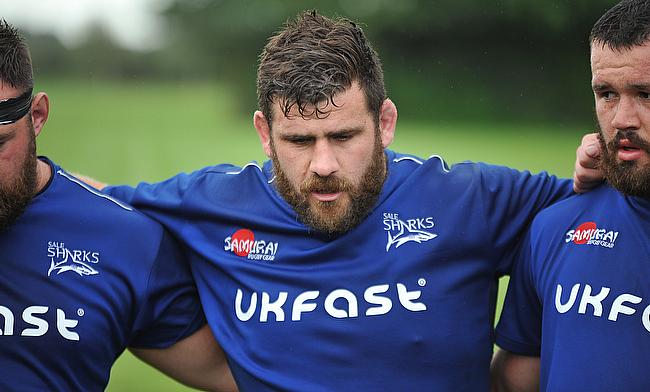 Last week, Championship outfit Jersey Reds announced Rob Webber as their new forwards coach for next season and we caught up with the Sale Sharks man to discuss his move into coaching. (Photo Credit: Creative Capture)

Rob Webber is selecting some of the standout moments in his career.

Having racked up over 300 professional games for club and country, this is no easy task. He remembers the starting point at Leeds Tykes, as well as playing his part in a talented Bath side which reached the 2015 Premiership final.

Webber also remembers the learning experiences he gained when he was coming through the ranks. A loan spell with Blackheath in National One is something he holds in high regard whilst his first England cap and going on tour to New Zealand are certain highlights.

And even with his current club Sale Sharks, Webber has created memories but the 33-year-old is now preparing for the next chapter in his career after accepting a role at Jersey Reds to become their new forwards coach.

“There are loads of highlights and all for different reasons,” said Webber, who last month, confirmed he would retire from the game at the end of this season.

🦈💯 | @robwebber2 will run out for his 1️⃣0️⃣0️⃣th appearance in a Sale shirt tonight!

What a servant to the club he is 👏 #OneMoreYear#SharksFamily @UKFast pic.twitter.com/7F78ixzJIB

“Winning first caps are obviously standouts and I have been fortunate enough to play in some really good teams, Sale being one of them. I had a couple of good years at Wasps and Bath as well.

“I also cherish memories of going to Blackheath on loan when I was 17/18 years-old because I was playing in National One and I made some great mates in that team.

“From that, to the other extreme of going on tour to New Zealand with England in 2014. It was fantastic to play at places like Eden Park. I have been very fortunate and I am lucky that I will be retiring having had such a wonderful experience. It has been a hell of a ride.

“When I decided I was going to retire and the guys at Sharks started looking into things like how many games I had made, it was humbling to look back on and if I had managed to avoid a couple of injury plagued seasons, it could have been a lot more!

“I have always valued playing really highly and it has been a privilege to get paid to go out and play. It takes a lot of hard work and dedication, but it has been great to say this has been my job for the last 17 years.”

The last paragraph says a lot about how much Webber has appreciated playing the game, but competing for 80 minutes doesn’t tell the full story. His time at Bath is also where he took his first steps into the coaching environment as he worked with the university team alongside Head of Rugby Aaron James.

And after swapping The Rec for the AJ Bell Stadium in 2016, Webber was able to continue honing his coaching skills with local club Sandbach and he has been with the now Midlands Premier outfit for just under three years.

His desire to learn has never wavered with Webber admitting he is as motivated for coaching as much as he is for playing. Having built up his knowledge thanks to his experiences in both BUCS Rugby and the lower levels of the English game, it was time for Webber to pursue his coaching on a full-time basis with Jersey presenting the perfect opportunity for him to do so.

“I wanted to get the word out there that I was looking to move more into the coaching side of the game,” said Webber.

“Jersey were looking to recruit a new forwards coach so we got in touch. I interviewed and spoke to the DoR [Harvey Biljon], the Chairman and everyone else and went through the process like that. It was the first job interview I had done in a long time!

“Once they had explained their set-up and what they wanted to achieve, it felt right for me. They are a very driven club. In the Championship, they run on a full-time schedule and they continue to do so. The job they were advertising for a forwards coach was very exciting for me so it did fit well.”

Webber isn’t the only Sale player to be enjoying the coaching element of the game. Bryon McGuigan, who has also worked with Sandbach, is set to join up with Preston Grasshoppers next season whilst Sam James is continuing to help his boyhood club, Manchester.

With life after rugby becoming more important for players, stepping into the world of coaching may seem like the next obvious step but Webber admits the environment isn’t for everyone.

Top class appointment for @jerseyrfc ! Huge congratulations and thanks to @robwebber2 for everything he’s done for the club over the last few years! #B4L #GoodLuck https://t.co/d4RvkD4l3H

“You can only play rugby for so long, can’t you?” said Webber. “For a lot of the lads, coaching is a natural progression because you are staying in the sport we all love, but I do think you have to be wired the right way for it. I know a lot of lads that couldn’t think of anything worse by the time they finish up!!

“I have coached two sides for roughly six or seven years ‘full-time’ alongside playing up and down the country and around the world. It has been quite challenging, but if you put the time in and show that desire, I do think you get the reward.”

Webber is set to begin his new role with Jersey Reds ahead of the 2020/21 season, but right now, there is a lot of uncertainty across the UK due to the coronavirus outbreak.

From a rugby point of view, you would think Sale would be keen to see the resumption of the domestic season with Steve Diamond’s side currently occupying second place in the Gallagher Premiership table whilst the Sharks are also in a cup final against Harlequins.

Sale’s last fixture was against London Irish at the beginning of the month and the game also saw Webber make his 100th appearance for the club, but despite reaching yet another milestone, the hooker would love to represent the Sharks again this term, once it is safe to do so.

“I’d love for us to get back on the horse straight away and knock off these games if we can but obviously, that will be decided by the powers that be,” Webber added. “If the season is done, then it is done and I’ll be content, but if it is not done, I better get running up and down this garden!”

We may well have seen Webber grace a rugby field for the very last time, but either way, one of the most experienced players of the modern era seems well-equipped for the next stage of his successful career.