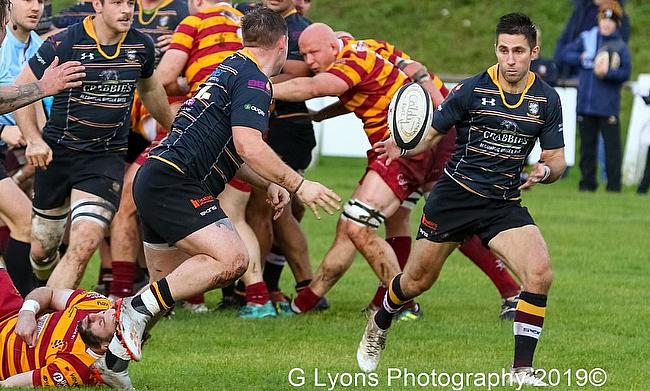 Before Storm Dennis last weekend, we had a much lighter weekend of fixtures. A fallow week in the NCA Rugby calendar, used to catch-up on fixtures effected by weather, seven games across National 1 and National 2 will take place on Saturday to bring everyone back to speed before the final stretch of fixtures this Spring. (Photo Credit: Gareth Lyons)

The two rearranged games for this weekend in National 1 won’t really have a bearing on how things finish in April. The biggest clash of the weekend sees Cambridge travel to Plymouth Albion after the original fixture was postponed last week.

Cinderford’s home replay against bottom-place Hull Ionians has been postponed until a later date.

Perhaps unsurprisingly, it is the north that has the most rearranged fixtures. Including games from late October and early November, as well as three games from last weekend, we could see some movement at the top and bottom of the National 2 North table.

At the top of the table, Sedgley Park will be hosting top side Caldy at Park Lane, with the Greater Manchester side hoping to get back in the race for the play-off spot. With two games in hand on both Fylde and Hinckley, it will be an uphill battle for Sedge as their visitors have beaten them two weekends ago and haven’t lost all season, sitting on 104 points this season, destined to be back in National 1 next season.

Chester will be playing Scunthorpe at Hare Lane. Both sides have had far from ideal seasons, Scunthorpe sitting bottom on six points, and Chester a far cry from their second place finish last season, could see Chester move several places up the table, still with a game in hand after their away game to Scunthorpe was also cancelled.

Otley play host to Luctonians this Saturday at Cross Green in what could potentially be a decisive game at the bottom of the table. As things stand, Otley are in the bottom three with 44 points. Lucts are five points clear from them, with 49 points. If the visitors win then there is clear distance between the two sides and potentially condemning the home side to relegation.

For a second consecutive weekend, Huddersfield’s home game against Tynedale has been called off because of the pitch being unplayable. As has Wharfedale’s visit from Stourbridge.

GAME OFF! Saturdays First XV game against Tynedale has been postponed again! After a referees pitch inspection and more rain expected the waterlogged pitch was deemed unplayable. The game will be re-arranged for a later date.

The lunch is also cancelled this week. pic.twitter.com/vpnkWy9HVd

For anyone in the London area on Friday night, stuck for something to do, Moseley Road could be the place to be. Esher host local rivals Barnes underneath the floodlights, neither side has anything on the line, with the visitors 20 points clear of the relegation scrap and the home side assured of their place in National 2 South next season.

Saturday sees Old Albanian and Leicester Lions play one another, with the Hertfordshire side mainly just wanting to pull themselves up the league table a bit more. Leicester, who are in sixth place, have adapted to live in the South extremely well and having bedded in so well, the side will no doubt be making a tilt at the title next season.

Old Redcliffians will be hosting Bury St Edmunds as the Bristolians attempt a last-ditch attempt at staying in the fourth division. With two games in hand on nearest rivals Westcliff and 12 points between them, with results going their way, a good result against mid-table BSE could get the ball rolling on a miraculous escape.

Similarly to Old Redcliffians, Sutton & Epsom have 21 points and could also potentially make a great escape from the drop. Coming up against Bournemouth, who also can mathematically escape a return to the fifth division too, it will be a full-blooded affair at Cuddington Court.