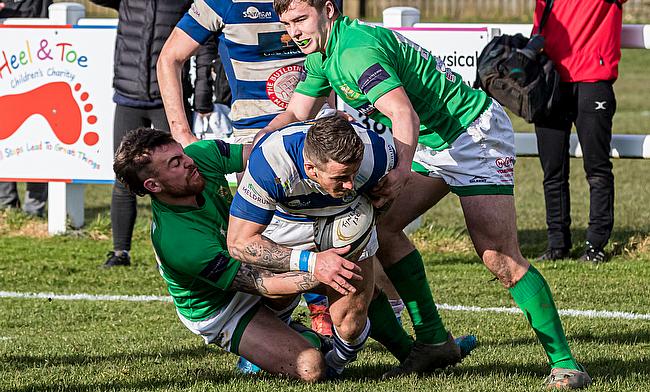 Last weekend was interrupted by storm Ciara, but this week it is the turn of storm Dennis to cause some menace across the country this weekend. (Photo Credit: John and Barbara Austin)

Each of these games are likely to be replayed next weekend, alongside several other rearranged fixtures that were postponed earlier this season.

After a weekend that didn’t throw up many surprises, it would seem that we could be in for more off the same this weekend. League leaders Richmond travel to eighth placed Old Elthamians, who will no doubt provide a challenge Steve Hill’s side, but it is difficult to count against a side that hasn’t lost since November.

Still in the hunt for promotion are Rosslyn Park, seven points adrift from first place, Park host Darlington Mowden Park. Not having a bad season, themselves, DMP could move into the top five if other results go their way this weekend with Blackheath travelling to Bishops Stortford.

Third place Rams will also be hoping to stay in the hunt for the top spot. Having transitioned from life in National 2 South with impressive ease. Making the bus journey to a Cinderford team that has secured their place in the third division for another season, Seb Reynolds’ side do come into the fixture as favourites, winning four of their last six games.

The final fixtures of the weekend see Hull Ionians travel to fellow bottom three club Rotherham Titans, who were subjected to 52-20 loss away to Richmond last weekend. The final side in the bottom three are Canterbury, who after failing to find a foothold in the third division host fourth place Chinnor in Kent. Birmingham Moseley will be travelling to Sale FC hoping to widen the gap between them and Rotherham.

After reaching the 100 points mark in National 2 North against Sedgley Park last weekend, Caldy now will be playing another one of their near rivals. This weekend the league leaders will be travelling to Fylde, with Sedge hoping for the Lancashire side to lose, so that they can reduce the nine-point deficit between the two sides.

Hosting the students this weekend, Sedgley can not only gain ground on Fylde this weekend but could also reopen the advantage they once held over Hinckley. Playing against second from bottom Preston Grasshoppers this weekend, the Leicestershire side have a fairly good chance of picking up a win, piling even more pressure on Sedgley to beat Loughborough.

When Caldy captain JJ Dickinson asked scrum half Cam Davies to do something impressive…. He didn't expect what happened next…. pic.twitter.com/3aDOTvXJse

Even if only for a week, Huddersfield have the opportunity to widen the gap between them and Luctonians, the two sides just separated by one point. Playing a Tynedale side secure in the knowledge that they will be in National 2 North next season, Gareth Lewis will be hoping that home advantage can play a part for a side that has had mixed fortunes this season.

Elsewhere, Hull will be the place to visit this weekend if you want to see a full-blooded Yorkshire derby, as Sheffield Tigers come to town. Wharfedale and Stourbridge play each other as sixth play eight and Chester are travelling to Scunthorpe before the two sides play each other again next weekend.

It has been a while since the top four in National 2 South has been this competitive. Four points separate first from fourth and with none of the top sides playing one another, it doesn’t seem like we will get much separation between the sides for some time yet, unless there are a few surprise results of course.

Taunton are getting a visit from seventh place Esher; Tony Yapp’s side have their noses just ahead of Tonbridge and Henley who sit behind the Somerset side on 85 points. With a visit from Westcliff this weekend at Dry Leas, Henley will no doubt be wanting to carry on their good form, in case of any slip-up from table toppers Taunton.

With perhaps the most difficult adversary of the weekend, Tonbridge will be up against an Old Albanian team that have played some very good rugby for periods this season. The rest of the fixtures in the South are all somewhat innocuous.

At the foot of the table Sutton & Epsom are playing mid-placed Bury St Edmunds, Old Redcliffians play Dings Crusaders and Bournemouth will be up against Londoners, Barnes. Rounding up the fixtures for this weekend, fifth-place Clifton are on the road to middle of the pack Worthing.