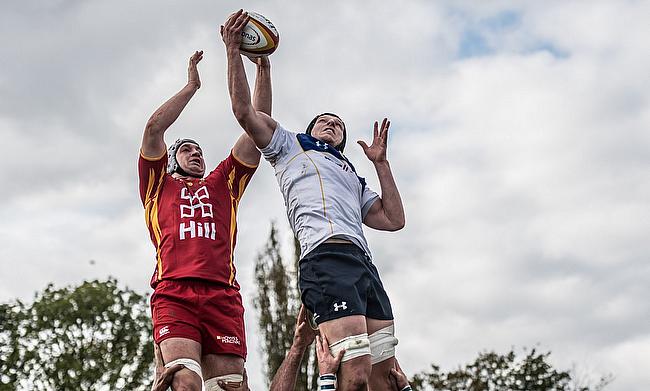 A very interesting selection of National One results last weekend has left this division wide open with just five points separating first and 12th place so expect an entertaining afternoon this Saturday.

Chinnor are currently top of the pile and they visit Rotherham Titans in Round Seven while second placed Old Elthamians, who are level on points with the league leaders, host Loughborough Students.

Last weekend, Chinnor lost their second game of the season, but the Black and Whites would have seen their name at the top of the league standings on Saturday evening. Matt Williams’ side were defeated by Bishop’s Stortford, but after an intriguing set of results in Round Six, it meant the Oxfordshire club returned to the summit of National One.

The side promoted from National Two South in April will now be aiming to bounce back after their home defeat last time out when they travel to Rotherham Titans on Saturday. The Yorkshire club are 10th in the division, but they are only four points behind league leaders Chinnor going into this encounter, which highlights how open this division is. After a mixed start to life at this level following relegation from the Championship, Joe Barker’s side welcome Chinnor to Clifton Lane having secured back to back wins and the Titans will be hoping to make it a trio of victories this weekend.

Like Chinnor, Old Elthamians also climbed up the league standings despite losing last weekend. OEs were narrowly beaten by Sale FC, but Gavin Lach’s side are now second in the table after a solid start to the campaign. The men from College Meadow are level on points with Chinnor having won four of their first six matches and they will be favourites to add another victory to that record when they host Loughborough Students in Round Seven.

Whilst five points separate league leaders Chinnor and 12th placed Rosslyn Park, Loughborough Students currently find themselves 13 points from safety, even at this early stage of the term. It is now six straight defeats for the side sitting at the foot of the division and the Midlands club are in danger of fading into the background before a third of the season is complete. The Students have the talent to turn this around, but their elusive win is starting to become more of a necessity.

Caldy welcome Ampthill and District to the Wirral this weekend looking to respond after their defeat to Plymouth Albion. Simon Verbickas’ side did begin Round Six at the top of the table following three straight wins, but their loss on the south coast saw them drop to third place.

Despite this, Caldy will be delighted to be heading into Round Seven just one point off the summit and Ampthill & District will be hoping to get themselves amongst the early front runners this Saturday. Ampthill’s inconsistent start to the season continued last weekend after they were beaten at home by Cambridge and it leaves them in eighth place. However, the A’s are just four points off the league leaders and a positive result in Cheshire would keep them in touch with the pace setters.

Darlington Mowden Park have gone under the radar in recent weeks. Back to back defeats against Old Elthamians and Blackheath put a dent in their early season form, but consecutive victories over Rosslyn Park and Birmingham Moseley have seen Danny Brown’s side move into the top four.

DMP have left it late to clinch their recent wins, but they will be happy that they are carrying some momentum into this contest with Sale FC. The visitors will travel north in good spirits after beating Old Elthamians in a remarkable game last weekend. Jonathan Keep’s side, who were promoted in April, have won all three of their home fixtures this term so the men from Heywood Road will now be aiming to secure their maiden away victory at this level to continue their positive start to life in National One.

For the second season in a row, Cambridge came away from Ampthill and District with a victory. It was another hard-fought win for the Blood and Sand at Dillingham Park, but Richie Williams’ side kicked off October on the front foot. Their victory in Round Six lifted them to fifth place in this extremely tight division and they will be eager to make it three wins on the trot when Blackheath visit Volac Park.

Last Saturday night, Blackheath Head Coach James Shanahan tweeted how close the National One table already is. His “Club” side clinched an excellent win over local rivals Rosslyn Park in Round Six which leaves them ninth in the league, but the men from Well Hall are just four points off the top. Shanahan takes his side to Cambridge this weekend and Blackheath will have their sights set on a fourth win from their last five fixtures.

Cinderford would have been disappointed to begin October with a defeat. Paul Morris’ side were beaten by Esher in unpleasant weather conditions, but looking at the bigger picture, it may not have dampened their spirts too much. The Foresters have won three and lost three of their opening six fixtures on their return to National One and the men from Dockham Road will be hoping to add another “W” to that record when they host Plymouth Albion in Round Seven.

It has been a patchy start to the campaign for Plymouth Albion. After finishing third last term, Kieran Hallett’s side have not been able to spark their season into life just yet, but they’ll be hoping their victory over Caldy in Round Six provides the catalyst as Albion set their sights on moving up the table. The men from Brickfields have every right to still harbour promotion ambitions despite sitting in 11th place as they find themselves just four points off the summit. Can Plymouth secure back to back wins for the first time this season on Saturday?

Rosslyn Park entertain Birmingham Moseley at the Rock this weekend and Kieran Power’s side will be itching for a reaction in Round Seven. After a narrow defeat to Darlington Mowden Park at the end of September, Park began this month with a loss against Blackheath which leaves the London-based side 12th in the table. There is a running theme through this preview regarding how tight National One is and for Park, that seems to ring true the loudest.

After a wet #london derby, check out the highlights of our match against @Blackheath_1858 on Saturday ⬇️

They are currently five points clear of the relegation zone, but they are the same distance away from league leaders Chinnor as they prepare to take on Birmingham Moseley. As for Moseley, they are one of the sides in the aforementioned both three as they slipped to a heart-breaking defeat to Darlington Mowden Park in Round Six. Moseley know they must improve defensively if they are to turn their fortunes around and it would be a huge boost to Richard Protherough’s side if they were able to secure their second victory of the campaign this weekend.

Bishop’s Stortford’s hard-fought victory over Chinnor in Round Six was described as a ‘fantastic defensive effort’ on the club’s Twitter feed. Andy Long’s side battled to a victory against the current league leaders and after a tough start to the season, the men from Silver Leys have now won three of their last four games.

They have the opportunity to continue their momentum when they host Esher this weekend. Stortford sit four points clear of Esher as things stand while the Surrey-based side occupy a place in the bottom three. That said, Rickey Nebbett’s men kicked off October with an excellent result at home to Cinderford, but as has been the case over the last couple of years, Esher need to translate their displays at Molesey Road into their away performances. In total, they have won just three of their last 17 games on their travels so they will be keen to improve that record on Saturday.