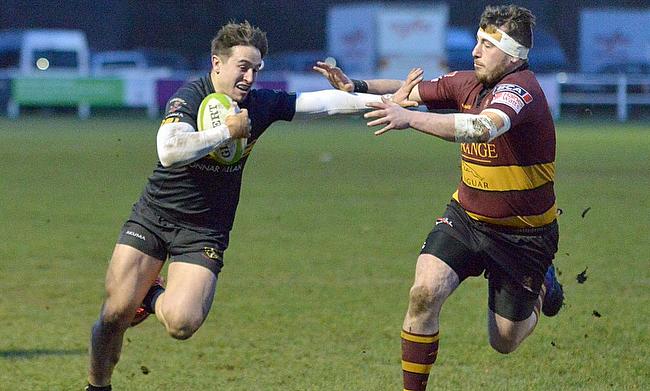 Ampthill and District moved to the summit of National One following a narrow win over promotion rivals Blackheath.

The A’s are now one point clear at the top as this fascinating title race took another twist in Round 19.

Down at the bottom, Bishop’s Stortford second win on the spin has enhanced their survival hopes after they beat Loughborough Students while Esher picked up a crucial victory against Caldy and Plymouth Albion distanced themselves from trouble after coming from behind to see off Cambridge.

Ampthill and District are the new leaders in National One after they recorded a thrilling bonus-point win over title rivals Blackheath.

On his A’s debut, hooker Tadge Mcelroy scored twice as the visitors clinched only their third away victory of the season.

A penalty try, plus scores from Will Foster and Will Allman, gave Ampthill a 19-5 half-time lead, with Michael Perks crossing for Blackheath.

Always good for such a small community club!! #Mob pic.twitter.com/MI13yp4sSL

The hosts produced a quick start to the second period and cut Ampthill’s deficit to two points thanks to tries from Alex Pickersgill and Danny Herriott.

However, Mcelroy – who is dual-registered from Saracens – came off the bench to score a brace to ultimately wrap up the win for Ampthill while Freddie Owen’s late score secured two bonus-points for ‘Club.’

Old Elthamians remain one point off the summit of National One after a hard-fought away win over Birmingham Moseley.

James Williams and Tom White exchanged penalties early on, before Adam Caves crossed from close range on the stroke of half-time to give Moseley the lead.

However, their advantage was immediately cut when White landed his second penalty and, on the hour, OEs went in front thanks to a Michael Kovacic score.

White kicked another penalty to extend OEs’ lead in the final 10 minutes and the visitors were able to hold on to claim four points.

Darlington Mowden Park once again defeated a promotion candidate in National One as they battled to a dramatic victory against Rosslyn Park.

First-half tries from Matt Dudman (2) and a penalty from Warren Seals wasn’t enough to give DMP the lead at the break.

Charlie Amesbury and Hugh Tizard both scored for Rosslyn Park, while a brace of penalties from Greg Lound put the hosts 18-17 up.

Another kick from Lound and Hugo Ellis’ effort moved Rosslyn Park 11 points clear, but back came DMP as Brandon Asher-Wood and Chris McTurk gave them a 29-28 lead.

With two minutes remaining, the home side thought they had clinched the win when Lound pinged over another penalty, but it was his opposite number who snatched the victory for DMP as Seals kept his cool from the tee to slot the last kick of the game.

Tries from Craig Holland and Josh Hodson (2), plus a Ben Palmer penalty, put the hosts in control of this contest just after half-time, but Cinderford produced a remarkable response.

Harry Hone had crossed in the first period for the away side and it was George Evans’ effort which sparked the fightback in Oxfordshire.

A penalty try was soon followed by a Reuben Norville score as Cinderford took the lead on the hour.

Chinnor then regained the advantage when Tom Burns bounded over, but Alex Frame’s boot proved to be decisive as his late penalty clinched the win for Cinderford.

Rotherham Titans lost ground in the National One promotion race as Sale FC produced a performance full of character to claim the victory at the CorpAcq Stadium.

Jonathan Keep’s side responded to their disappointing defeat against Bishop’s Stortford to secure their third win from their last four matches.

Great win for the @SaleFC boys today against a solid @RotherhamRugby team, our defence is getting back to the high standards we set last season. Good to grind out a tight game, the lads worked so hard for each other which is all you can ask of them #Nat1 #onesalefc #winnerslounge

Rotherham had led 12-5 at one stage thanks to tries from Kieran Frost and Henry Roberts, but the visitors ultimately fell to a defeat which leaves them nine points off the summit while Sale sit five points clear of the relegation places.

Plymouth Albion came from behind to return to winning ways as they defeated Cambridge at Brickfields.

Albion’s bonus-point victory – thanks to tries from Will Norton (2), Josh Skelcey and Jamie Salter – saw Kieran Hallett’s men respond after their loss away at Ampthill and District in Round 18.

However, they did trail 17-10 at the break as Joe Green and Rob Conquest both crossed for Cambridge, while Ben Penfold kicked seven points, but Plymouth produced an excellent second-half display to secure the win.

Esher are now two points clear of the relegation zone as they picked up a potentially crucial win over Caldy at Molesey Road.

The hosts made a flying start as both Kariym Irving and Thomas James dotted down and Esher carried that 10-0 lead into the second period.

It was Caldy who were on the front foot after the restart as Nyle Davidson crossed for a converted score and the flanker doubled his tally on 55 minutes to put the away side in front.

However, Esher responded just after the hour as Callum Waters dotted down and that proved to be the match-winning score as Ricky Nebbett’s side secured successive home wins.

Bishop’s Stortford’s survival bid received another boost in Round 19 as they defeated rivals Loughborough Students in an entertaining contest in the Midlands.

Back to back victories for Andy Long’s side leaves them four points from safety while bottom of the table Loughborough are nine points adrift.

Scores from Dan Elsom, Joss Linney, James Apperley and Rob Duff came before the break for Stortford with a penalty try getting Loughborough on the board.

Thanks to the travelling @BSRUGBY support yesterday!! Always gives us that bit extra! ????

Away fly-half George Cullen crossed to extend Stortford’s advantage after the break, but Loughborough responded with their second try of the afternoon.

Manu Vunipola kept the visitors firmly in control as he dived over for their sixth score, but the Students hit back with another penalty try to make it 38-21.

Will Attfield’s try on 79 minutes came to late for Loughborough to produce a remarkable turnaround and instead, Tom Banks slotted over a late penalty to wrap up the win for Stortford.