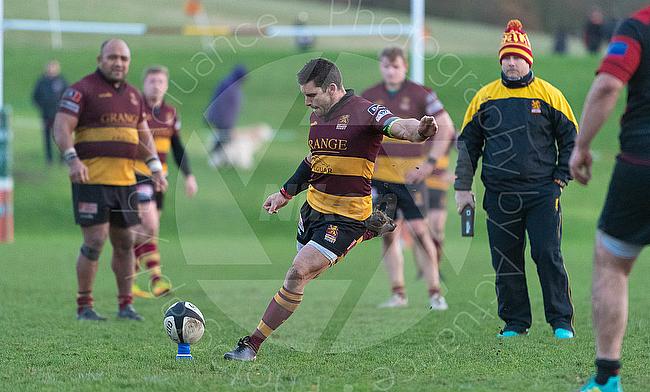 Two of National One’s promotion candidates meet in Round 19 as Blackheath host Ampthill and District on Saturday as this remarkable title race continues.

Over the last month, there have been several match-ups between sides fighting for pole position and Blackheath’s fixture with Ampthill is just the latest instalment.

The top four clubs are separated by just a single point so second-placed Old Elthamians and Rosslyn Park (3rd) will have a close eye on the battle between league leaders Blackheath and Ampthill (4th) this weekend.

OEs visit Birmingham Moseley while Rosslyn Park take on Darlington Mowden Park on Saturday and two other teams who are in the promotion conversation, Rotherham Titans and Chinnor, face tricky tests against Sale FC and Cinderford, respectively.

The bottom half of National One is just as intriguing with only six points between ninth place and the relegation zone. With this in mind, there are some key fixtures this weekend with Cambridge travelling to Plymouth Albion and Caldy coming up against Esher while the division’s bottom two sides, Bishop’s Stortford and Loughborough Students, battle it out in the Midlands.

The last month has been relentless. The National One title race has continued to gather pace following clashes between promotion candidates and this weekend is no different. League leaders Blackheath host fourth placed Ampthill and District in Round 19 and just one point separates the two sides. ‘Club’ come into this fixture after returning to the summit of the division following a battling victory over Darlington Mowden Park last time out.

National One – Round 18 Review: @Blackheath_1858 into top spot as #Nat1 continues to excite.

Having already faced title rivals Old Elthamians at the end of December and with Ampthill and promotion candidates Rosslyn Park to come before the conclusion of January, the next two weeks could be defining for Blackheath. In terms of Ampthill, this Saturday may be crucial for them. The A’s have won four of their last five matches to stay firmly in the hunt for top spot and a victory at Well Hall could see them move into pole position. They are more than capable of getting the better of Blackheath, as shown by their 33-22 victory against the table toppers back in September, but a defeat for Ampthill would certainly be blow to their title aspirations.

Old Elthamians’ fixture with Rosslyn Park in Round 18 was far from a ‘must-win’ game for Gavin Lach’s side, but it may have felt like a significant victory after the men from College Meadow defeated one of their title rivals in fine fashion. OEs entered last weekend on the back of two successive defeats, but they returned to winning ways in style to get their promotion bid up and running once again.

Old Elthamians are just a single point behind near neighbours Blackheath and while the league leaders have a tricky test against another promotion contender, OEs face a tough away challenge against Birmingham Moseley. On paper, everything suggests a win for the visitors because Moseley sit one point above the relegation zone, but nothing has been that simple in National One this term. The hosts come into this clash on the back of a narrow loss against Rotherham Titans, but the Midlands club have won their last three matches on their own patch. Could they make it four in a row to dent OEs’ title bid?

Rosslyn Park’s six match winning streak came to end last weekend as they were defeated by fellow promotion challengers Old Elthamians. A disappointing first half display at College Meadow ultimately cost Kieran Power’s side, but Park will be determined to react by ending January with two potentially massive victories.

Next week, the men from the Rock take on league leaders Blackheath, but first up, is the visit of Darlington Mowden Park. The hosts are only one point off the top, but DMP will provide a serious test for them this Saturday. Danny Brown’s side arrive in the capital to face yet another side battling for promotion. The North-East outfit began the month by beating Old Elthamians before being edged out by Blackheath in Round 18. DMP are starting to produce the displays which saw them finish second last term and if they maintain their recent upturn in performances, they have every chance of leaving London with a result this weekend.

After losing to Rosslyn Park to begin 2019, Rotherham Titans’ promotion ambitions took a step in the wrong direction, but Joe Barker’s men moved out of reverse and back into the title race last weekend. With Rosslyn Park dropping points and Blackheath narrowly beating Darlington Mowden Park, the Titans’ dramatic victory over Birmingham Moseley means they are only six points off the top as things stand.

The Yorkshire side left it extremely late to pick up the win last Saturday, so they will be hoping for a more straightforward afternoon when they travel to Sale FC in Round 19. That is easier said than done against a Sale side who have been excellent at home over the last couple of years. Things were looking much rosier for Jonathan Keep’s men either side of the Christmas break following back to back wins, but last Saturday’s loss to strugglers Bishop’s Stortford would have been disappointing. Sale are now just three points clear of the drop zone and the Manchester-based side will be keen to get back on track this weekend as they look to begin moving away from the relegation places.

Old foes clash at Kingsey Road this weekend as Chinnor entertain Cinderford in Round 19. Both of these sides battled hard to gain promotion into National One, but it was the latter who went up automatically last season whilst Chinnor had to go down the play-off route. However, it is the hosts who find themselves in a better position at this level and in fact, Matt Williams’ side have to be considered as a title challenger.

The Black and Whites were on the right end of a narrow result last Saturday and their victory over Caldy means Chinnor sit just six points behind league leaders Blackheath. However, Cinderford will arrive in Oxfordshire with confidence behind them after beating Loughborough Students in Round 18. With just seven points separating seventh position and the relegation places, it may have felt like a significant win for Paul Morris’ side as the bottom half of the table becomes increasingly tight. Cinderford defeated Chinnor in this corresponding fixture last season, but who will come out on top this time around?

Richie Williams’ tweet on Sunday morning summed it all up. A photo of Cambridge celebrating their victory over Esher in Round 18 highlighted just how important the win was for the Blood and Sand, who are now six points clear of the relegation places.

Back to back home wins have kept Cambridge away from trouble for now and with the bottom half as close as it is, every triumph is vital. Their opponents this weekend, Plymouth Albion, know that more than most. Four successive victories lifted them out of the drop zone, but a loss to Ampthill last week means Albion lie in 10th place, level on points with Cambridge. A win for either side at Brickfields on Saturday would be a massive boost.

Caldy have fallen dramatically down the division. The Wirral-based side begun the season extremely well with six wins from their first eight games, however since the end of October, victories have been hard to come by. The men from Paton Field have lost eight of their last 10 matches and they now sit six points clear of the drop.

With this in mind, their fixture with Esher this weekend could well be crucial. The hosts occupy 14th place in the table as things stand following three defeats from their last four games. However, Ricky Nebbett’s side are only one point from safety and they have won their last two home matches so a hat-trick of triumphs at Molesey Road could see them move out of the relegation zone.

The bottom two sides in National One clash this weekend as Bishop’s Stortford travel to Loughborough Students in a potentially vital game in the fight for survival. The visitors will arrive in the Midlands in high spirits as a superb win over Sale FC in Round 18 means Andy Long’s side are only six points from safety.

Here’s the team for this Saturday’s 1st XV Away Game v Loughborough Students RFC – KO 3pm…see you there! pic.twitter.com/jEHKuz8G0z

Stortford haven’t collected back to back wins since October so Loughborough will be hoping to deny their visitors on Saturday. The Students returned to the foot of the table after their loss to Cinderford last time out and Alan Buzza’s side are seven points away from climbing out of the relegation places as things stand. A win for both teams is not a necessity at this stage, but a defeat would be a major blow to their respective chances of staying in National One.