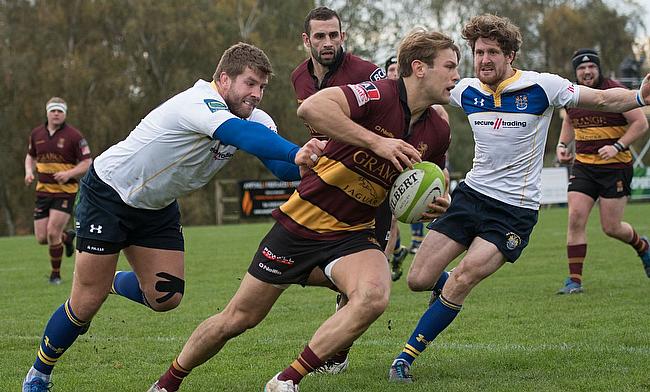 Ampthill and District have moved five points clear at the top of National One following a bonus-point win over title rivals Old Elthamians.

The A’s now have control of their own destiny and are in the driving seat for a place in the Championship next season.

Fellow promotion challengers Rosslyn Park are also five points off the summit after they battled to a victory over Esher while Blackheath remain in the title picture following their win against Cinderford.

It was also all change towards the bottom as Birmingham Moseley moved out of the drop zone after a superb win at Chinnor. Richard Protherough’s side are one point clear of the relegation places and it’s now Caldy who sit in 14th place after they narrowly lost to Bishop’s Stortford.

Loughborough Students have also enhanced their survival hopes while Cambridge’s loss to Rotherham Titans keeps them just above the trapdoor.

Elsewhere in National One, Plymouth Albion got the better of Darlington Mowden Park in an excellent contest at Brickfields.

Ampthill and District are the new leaders of National One after producing an impressive display against title rivals Old Elthamians.

Mark Lavery and Paul Tuner’s side are now five points clear of OEs, as well as fellow promotion contenders Rosslyn Park, with five games in the season remaining.

Ampthill asserted their control in the first period after scoring three tries through Matt Collins, Sam Hanks and Maama Molitika.

Joe Carlisle landed two penalties for the visitors, but Ampthill stayed in the ascendency after half-time.

James Pritchard pinged over a penalty before Ralph Adams-Hale and Olly Morris both touched down to clinch a pivotal victory in the National One title race.

Rosslyn Park remain four points off the summit in National One after battling to a hard-fought win over relegation-threatened Esher.

Adam Frampton’s score plus a penalty from Greg Lound put the visitors 10-0 ahead at the interval.

But Esher rallied in the second-half as a penalty from Paul Roberts and a try via Jack Musk cut Park’s lead to three points.

Benji Marfo responded for the away side, but back came Esher as George Simpson dotted down to keep the hosts in touch.

However, Esher’s indiscipline would cost them in the final 13 minutes as Harrison Collins was sent-off before Simpson was shown a yellow card.

In the end, Park had to settle for four points which keeps them firmly in the hunt for the title, while Esher are now bottom of National One and 10 points from safety.

Blackheath sealed their fourth consecutive victory as they swept Cinderford aside at Well Hall.

Ben Ransom, Henry Staff and Jake Lloyd touched down for the hosts before Cinderford were able to get on the board.

Jack Hayes finished well for the visitors to make it 21-7, but Blackheath put their foot down once again as Alex Pickersgill and Lloyd scored further tries.

The win for ‘Club’ keeps them eight points behind the leaders as James Shanahan’s side remain in the promotion conversation.

Cambridge are just one point clear of the relegation places in National One as Rotherham Titans secured a welcome victory at Volac Park.

Joe Green danced through to give the hosts an early lead before Mike Ayrton and Louis Rawlings both dotted down as the Blood and Sand led 17-12 at half-time.

A penalty try and a score from Henry Roberts kept the Titans in touch with the home side and Rotherham were soon level as Jack Bergmanas crossed.

Ben Penfold edged Cambridge back in front from the tee, but a second penalty try of the afternoon for the visitors proved to be decisive as Rotherham ended a three-match losing streak.

Jack Arnott scored out wide with Josh Skelcey and Fraser Honey also going over, but only after Ollie Walker had opened the scoring for DMP.

Jamie Salter crossed before half-time to put Plymouth 28-10 up and both sides exchanged tries after the break.

Ben Frankland grabbed DMP’s second, but the hosts stayed in the driving seat as Cameron Setter sniped his way across the line.

In the final quarter, four yellow cards were shown and three tries were scored in a wild ending.

Simon Uzokwe and Jordan Poole both dotted down, either side of a Plymouth penalty try, as the visitors clinched a bonus-point while Albion sealed another home triumph.

Birmingham Moseley took a massive step towards survival in National One as Aedan Moloney inspired the Midlands club to a superb win over Chinnor.

Craig Holland’s try helped Chinnor lead 7-0, but that proved to be the only points from the home side all afternoon as Moseley ran riot.

The game has been won in the scrum today… pic.twitter.com/RR3FgUU9Sp

Ryan Roach rumbled over for the away side and a score from Moloney made it 10-7 at the break.

A penalty try kicked off proceedings for Moseley in the second period and further scores from Sam Hollingsworth and Mike Penn put the game out of reach for Chinnor.

A tough afternoon for Chinnor got worse as Alex Hearle and Moloney scored late tries to earn Moseley a vital victory, which leaves them one point clear of the drop zone.

Caldy have fallen into the bottom three in National One as Tom Banks scored a late penalty to snatch victory for Bishop’s Stortford.

A try from Stephen Ball and five points from the boot of Banks put Stortford ahead at the break and the latter added to his total by landing another penalty on 47 minutes.

Trailing 13-0, Caldy hit back as tries from Rhys Hayes and Josiah Dickinson gave the home side a one-point lead heading into the final 10 minutes.

However, Caldy were to be denied a crucial win as the impressive Banks kept his cool to rescue the victory for Stortford. The home side are now one-point shy of safety with five games remaining.

Loughborough Students climbed off the foot of the National One table and enhanced their survival hopes with a bonus-point win over Sale FC.

Three tries, including one apiece for Will Brown and Andrew Nathan-Boye, gave Loughborough a 17-12 advantage in the first-half, only after Sale had taken an early lead thanks to Ryan Parkinson and a penalty try.

Good luck to @SaleFC for the remaining few games of the season and safe home!#WhereHistoryBegins #Nat1

Oskar Hirskyj-Douglas’ try extended Loughborough’s lead and Cameron Jordan’s effort in the final five minutes proved to be enough for the Students to seal a vital win.

Chris Taylor did grab a late consolation for Sale, but in terms of Loughborough, they are now seven points from safety.