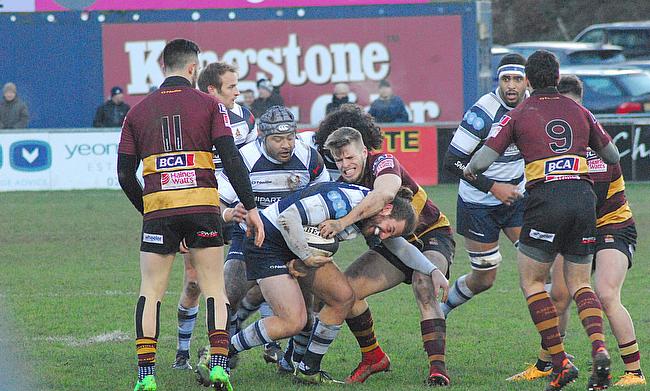 Coventry extended their lead at the top of National One as they beat Ampthill and District to secure their fourteenth successive victory of the season.

This latest win for the league leaders means they are now 13 points clear at the top of the division, leaving their promotion rivals with a lot of work to do to catch Rowland Winter’s side.

Darlington Mowden Park are Coventry’s nearest challengers and they just about kept the table toppers in their sights following a dramatic late win at Fylde.

Blackheath moved up to third in the table following a comfortable win over Caldy while Bishop’s Stortford, Old Elthamians and Cambridge all secured victories.

Birmingham Moseley against Plymouth Albion and Rosslyn Park’s trip to Hull Ionians were both postponed.

Coventry are now 13 points clear at the top of the National One table thanks to a nine-try demolition of Ampthill and District at Butts Park Arena.

Scrum-half Tom Kessell scored a hat-trick for Cov and the visitors never recovered from a half-time deficit of 28-7.

Kessell began and ended the first half scoring with George Oram and Jack Preece also going over for Rowland Winter’s men.

Kessell completed his hat-trick after the break while Max Trimble and Will Maisey added further scores. The aforementioned Maisey landed 12 points with the boot and Tony Fenner also kicked six for the hosts.

Kevin Barratt and Sam Baker grabbed Ampthill’s tries, but they were merely consolations for the away side who are now fifth in the division.

Fylde held a 7-0 lead thanks to a superb score from Tom Grimes, but this game sprung into life heading into the final 20 minutes.

FULL TIME – DMP come away with the win after a tight game against @fylderugby ! Thank you to the Mowden Family for your fantastic travelling support! #MowdenFamily #ComeOnPark pic.twitter.com/CWFg841H91

Joe Craggs dotted down for DMP, but Fylde gave themselves a five point lead when Alex Dolly landed a penalty.

Warren Seals responded from the tee for the visitors before Fylde a potential their victory snatched away from them as McCartney crossed with just two minutes remaining to seal the win for Danny Brown’s side.

Blackheath beat Caldy to claim their third win in four National One matches to move up to third in the table.

It has been a good week for Head Coach James Shanahan who also guided Cambridge University to Varsity victory and he would have been delighted to see his Blackheath side lead 26-3 at the break.

And it was the visitors who had the better of the second half as Nick Royle and Stuart Cross both touched down in the final quarter, but Sam Evans’ late penalty secured the win for Club.

Jack Stapley went over for a converted score for the visitors, but Stortford led at half-time thanks to touchdowns from Rob Duff, Dan Elsom, Tom Banks, Steve Ball and Will Roberts.

Tries via Duff and Nick Hankin after the break helped Stortford over the line, while Tim Bitirim’s effort for Loughborough was just a consolation as the Students’ good recent form came to a halt.

Old Elthamians ground out their first win in four matches as they inflicted yet another defeat on Old Albanian.

The home side shot into a 12-0 lead thanks to tries from Nick Forster and Ali Crossdale.

Full time – Old Albanian 15 Old Elthamians 24.
Another hugely impressive second half performance from the boys against a strong Albanian side.

But OEs reeled in their hosts following a penalty try and a score from Jay Rudland-Thomas to trail by just a point at half-time.

Another penalty try gave the visitors the lead for the first time in the game and they didn’t relinquish their advantage for the rest of this encounter as Tom White’s late penalty sealed victory.

Both of these teams went into the game on the cusp of the top half of the division, but it was Cambridge who leapfrogged their hosts.

Ben Ibrahim touched down to put Cambridge ahead in Surrey, but Esher’s Billy Harding matched him to bring the game level.

Lewis and his opposite number Paul Roberts exchanged penalties, but it was the Cambridge fly-half who nudged over the vital points just before half-time, which ultimately clinched them the win.