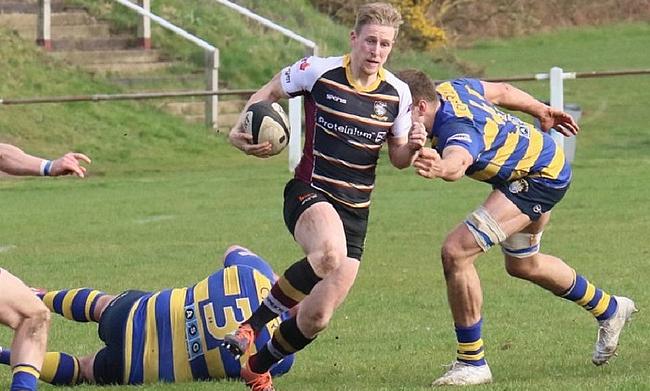 Caldy and Loughborough Students have enhanced their chances of staying in National One as both sides secured vital victories in Round 28. (Photo Credit: Derek Salisbury)

Caldy ended a run of two wins from their last 14 games as they did the double over Darlington Mowden Park while the Students beat relegation rivals Esher.

Both clubs are now just two points off safety after Cambridge were beaten by Rosslyn Park and Birmingham Moseley have also been dragged back into the survival battle after losing out to league leaders Ampthill and District.

The A’s are now five points clear at the summit with two matches to go while second-placed Old Elthamains are still right on their heels following a hard-fought victory against Cinderford.

Elsewhere in National One, Blackheath defeated Chinnor, Rotherham Titans claimed a victory in their final home match of the season against Bishop’s Stortford and Sale FC booked their place in the division for another season after beating Plymouth Albion.

Ampthill and District edged closer to promotion to the Championship after a scintillating match against Birmingham Moseley at Billesley Common.

Four tries were scored in the first half, three of which came from the A’s. Alex Lutui, Sam Hanks and Joe Bercis all crossed while Chris Brightwell dotted down for the hosts.

Moseley brought themselves right back into the contest after the break as Joe Wrafter and Ryan Roach both scored, but Ampthill responded to regain control.

Berics and Carl Burgess scooted over to make it 33-19 to the away side and despite Graham Geldenhuys claiming a bonus-point score for Moseley, Ampthill wrapped up the win when Northampton-bound Karl Garside touched down.

Ampthill are now five points clear at the summit with fixtures against Sale FC and Loughborough Students to come while Moseley find themselves just four points above the drop zone.

Title chasing Old Elthamians came from behind to secure a hard-fought win against Cinderford at College Meadow.

Gavin Lach’s side did fail to secure a bonus-point in Round 28, but OEs are only five points off Ampthill as we enter the final two games of this compelling promotion race.

The hosts did trail 7-5 at the interval, with Jack Hayes’ try cancelling out a score from George Perkins.

Kieran Moffat’s score proved to be enough for OEs to earn a vital win while Liam Hemming landed a penalty to seal a losing bonus-point for the visitors.

Rosslyn Park earned a thrilling win over a spirited Cambridge, who are now just two points clear of the relegation places.

The hosts led 15-13 at half-time thanks to tries from Mike Macfarlane and Karl Gibson only after the visitors had made a storming start through Joe Green and the boot of Ben Penfold.

MacFarlane grabbed his second following the interval, but Cambridge turned the game around as Green completed his hat-trick.

Both sides then exchanged penalties, however, it was Park who delivered the decisive blow as two late tries from Dan Laventure and Joe Munro clinched the victory for the hosts.

Blackheath fought back in the second period to secure an enthralling victory against Chinnor at Kingsey Road.

The hosts led 11-5 at half-time following two penalties from Caolan Ryan and a try from Craig Holland, while Harry Fry dotted down for the away side.

Fry’s second try was the perfect start for ‘Club’ after the break and the hooker completed his hat-trick soon after, with Leo Fielding also landing a penalty for the visitors.

Henry Staff’s score increased Blackheath’s lead again before Chinnor’s Tom Jubb dotted down to make it 27-18 just after the hour.

However, two further penalties from Fielding guided Blackheath home despite Danny Barnes scoring late on for the home side.

Rotherham Titans bounced back from last week’s defeat against Cinderford to claim a bonus-point win over Bishop’s Stortford as 10 tries were scored at Clifton Lane.

Winger Dan Leake scored in the first half for Rotherham and he was joined by Zak Poole.

Tries from Jack Bergmanas, Dan Preston-Routledge and Leake confirmed the victory for Joe Barker’s side

Stortford had led 21-14 at half-time through Chris Smith, Reuben Bird-Tulloch and Tom Banks and the visitors were able to clinch two bonus-points with a penalty try as well as a second from Bird-Tulloch.

Sale FC have confirmed their place in National One for another season after a bonus-point win against Plymouth Albion, despite being reduced to 14-men in the second half.

Stone Priestley-Nangle crossed to give Sale the lead, but Dan Powell scored to level the contest.

Emiliano Calle-Rivas slotted over a penalty to put the hosts back in front, however, tries from James Kenny and Connor Eastgate, either side of Paolo Odogwu’s superb effort, put Albion 17-15 ahead.

Calle-Rivas landed another three points to nudge Sale into the lead before Robbie Povey darted over to give the home side a cushion.

However, Dan Birchall was shown a straight red-card on 62 minutes for Sale but the hosts responded magnificently to the setback as Neil Briggs rumbled over,

Frank Kelly pulled one back for Albion, but the away side couldn’t add to their tally and Povey made sure of the win for Sale as he pinged over a late penalty.

Caldy gave their survival hopes a major boost in Round 28 as they secured a much-needed victory over Darlington Mowden Park.

After a torrid run of recent from, the Wirral side were desperate for a positive result in the North-East as they begun the afternoon six points from safety.

The visitors were able to strike early as Ben Jones landed a penalty and they extended their advantage immediately after half-time as Tom Sanders went over.

But, DMP took advantage of Michael Barlow’s yellow card as both Alfie Barron and Shaun McCartney crossed the whitewash to put the home side in front.

However, Caldy hit back and scores via Robert O’Donnell and Nick Royle in the final 12 minutes clinched a welcome win for the away side, who are now just two points from safety.

Loughborough Students were able to see off rivals Esher in Round 28 as they increased their chances of avoiding relegation.

The Students edged the first half and led 19-15 thanks to three tries, two of which coming via Callum Watson and Will Brown.

In National League 1, @LboroRugby are next to bottom yet have more try bonus points than anyone other than the league leaders @AmpthillRufc. Student rugby.
Never a dull moment. #nat1https://t.co/BuDChdVPgI

Brown grabbed his second in the final five minutes before Esher were reduced to 14-men when their prop was sent off.

Tom Ffitch then made sure of the victory for the Students from the tee and the Midlands club are now two points shy of safety while Esher find themselves seven points adrift.