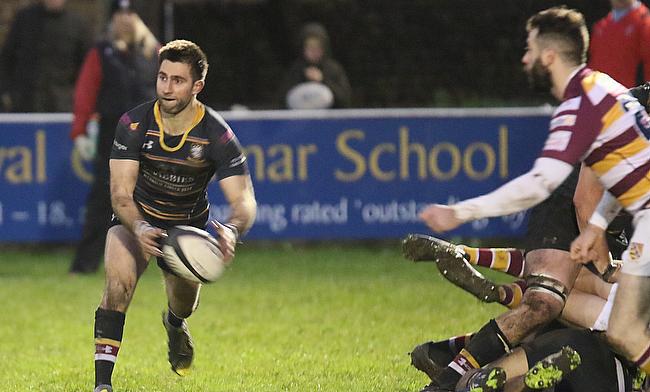 With Darlington Mowden Park’s trip to Cambridge and Plymouth Albion against Bishop’s Stortford both postponed, there wasn’t a full round of fixtures to begin January, but that did not hinder the entertainment on show.

League leaders Coventry racked up a half century of points as they continued their unbeaten record this season with a win over Old Albanian and Caldy ran in 10 tries to hammer Loughborough Students.

Old Elthamians were rampant at home against Fylde and Ampthill & District and Blackheath played out a tight affair while Birmingham Moseley were dominant against Hull Ionians and Rosslyn Park and Esher delivered a thriller.

Coventry maintained their 100 per cent record in National One as they secured their sixteenth victory in a row by beating Old Albanian.

Rowland Winter’s side ran in eight tries overall, including a brace from scrum-half Pete White.

We made a flying start to 2018 with a 52-5 victory over @Old_AlbanianRFC. No signs here of a Christmas hangover #CovRugby

Tony Fenner, Latu Makaafi, James Stokes, Rob Knox, Max Trimble and Olly Povoas were the other names on the score sheet as the home side extended their lead to 18 points at the top of the division.

Ross Parsons’ try just after the hour provided scant consolation for the visitors.

Ampthill and District’s strong defence proved to be the difference as they claimed their second home win on the spin after victory over Blackheath.

Joe Bercis’ first-half try after waves of pressure gave Ampthill the early lead and Aleki Lutui edged the hosts further in front on the half hour.

Former A’s player Joe Tarrant had nudged over a penalty in the first period for Blackheath and his side cut the deficit to three points as the fly-half landed another kick shortly after Jake Lloyd’s score.

However, Billy Johnson’s try on 65 minutes ultimately clinched the win for Paul Turner’s men, but the visitors were able to claim a losing bonus point courtesy of Tarrant’s third penalty of the afternoon.

Old Elthamians produced a ruthless display as they scored eight tries in a rout of Fylde at College Meadow.

Tom Parker, Ian Kench, Nathan Morris and Alex Brown also scored tries, while Fylde could only manage efforts from Ben Vernon and Connor Wilkinson on another tough afternoon for the division’s bottom club.

Birmingham Moseley back Sam Pointon scored twice as the Midlands side came away from Hull Ionians with their first victory for three matches.

Moseley had entered December on a five game winning run, but after a disappointing festive period, Richard Protherough’s men began the New Year on a positive note.

Pointon, along with Ryan Roach, went over in the first period for Moseley, but a try from Ed Falkingham and two penalties from Isaac Green gave the I’s a narrow lead at the break.

However, Moseley were the better side after the interval and Pointon’s second as well as Sam Brown’s effort clinched victory while Sam Hollingsworth also landed a penalty.

Caldy ran in 10 tries to thrash Loughborough Students and make it three wins from their last four matches in National One.

The hosts, who have now won five times on their own patch this season, were 29-0 up at the break with Gavin Roberts, Tom Banks, Nick Royle and Delwyn Jones all going over.

Royle completed his hat-trick after half-time to add to three other scores and a John Parker try as Caldy ran riot.

Students did manage to score via Ollie Adams, but this was an afternoon to forget for the Midlands club.

The visitors, who headed into this game on a four match losing streak, led for most of the contest, but Rosslyn Park managed to snatch the win as they moved further away from the relegation places.

Brilliant 2nd half performance from the lads https://t.co/DTP0Im5yVS

Andrew Henderson (2), Rhys Crane(2) and Benji Marfo (2) got the hosts’ touchdowns, but with the score level at 37-37 with the clock ticking towards red, Hugo Ellis stole the victory for Park which leaves them eight points clear of the drop zone.

Joe Beckett and Cadan Murley each scored twice for Esher and despite further scores tries from Billy Harding and Dan Rowland, the Surrey side saw a win slip away from them.