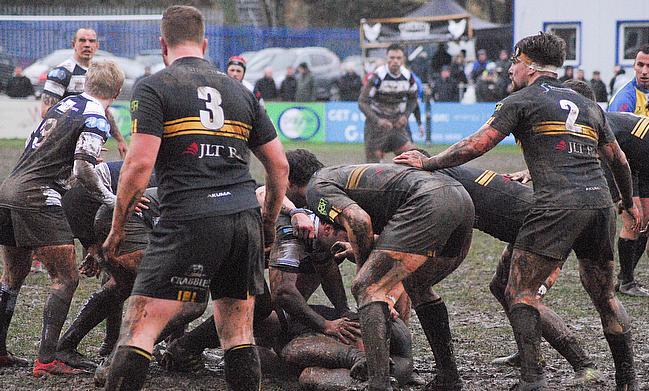 Cambridge and Esher both picked up morale-boosting victories to create some distance between themselves and the relegation zone.

Both sides are now seven points clear of the trapdoor after wins against Old Albanian and Fylde while Loughborough Students and Hull Ionians are still battling for survival.

The Students are now two points from safety after drawing with Blackheath while Hull Ionians remain a place above the bottom three after losing heavily to a classy Old Elthamians side.

At the right end of the division, Plymouth Albion lost for the first time at home this season as they were beaten by champions Coventry and Darlington Mowden Park edged past Bishop’s Stortford in a thriller.

Elsewhere, Ampthill and District are back into the top three after a hard-fought win against Rosslyn Park and Caldy left it late to beat Birmingham Moseley.

Luke Flack scored to put the hosts ahead, but Robbie Weeks was yellow-carded after a deliberate knock-on.

Coventry then went in front when Heath Stevens, Scott Tolmie and Tom Jubb all crossed, but their lead was reduced to seven points by half-time after Jamie Salter dotted down for Albion.

The home side levelled the game up six minutes after the restart as Setareki Raumakita went over for a converted try, but with the score at 21-21, the ever reliable Will Maisey scored a penalty on 56 minutes which ultimately clinched the win for Coventry.

Darlington Mowden Park fought back to claim a bonus-point win over Bishop’s Stortford as 10 tries were scored at the Northern Echo Arena.

A second try for Gibbs plus scores from Chris McTurk and Grant Connon confirmed victory.

Ampthill and District continued their positive recent form as they beat Rosslyn Park in an exciting contest.

Lawrence Rayner, Sam Baker and Aleki Lutui all scored for the visitors in an entertaining first half.

Rosslyn Park registered two converted tries in the opening 40 minutes and trailed 24-14 at the break.

Pete Weightman increased the A’s lead after the interval but despite controlling the game, Benji Marfo was able to cross for Park to keep them in this encounter.

However, Ampthill held firm to seal a victory which moved them back up to third place in the standings.

Loughborough Students and Blackheath shared 11 tries in the Midlands as their thrilling National One clash ended in a draw.

Blackheath could have stolen the victory at the death, but Joe Tarrant’s conversion fell just short.

The hosts led this contest 19-12 at half-time with their tries coming from Jordan Olowofela (2) and Jack Stapley while Danny Herriott and Tom Stradwick went over for ‘Club’.

The visitors produced an excellent spell after the break as three quick-fire tries from Markus Burcham, Neale Patrick and Tom Baldwin gave them a 10-point lead.

However, the Students battled back as Stapley grabbed a second and Olowofela completed his hat-trick to put them in front with two minutes remaining.

But, Blackheath were able to snatch a share of the points as Tom Chapman darted over for an unconverted try.

Old Elthamians moved up to sixth place in National One as they ended Hull Ionians’ unbeaten run to come out on top at College Meadow.

Dom Lespierre (2), Renford Bennett and Kieran Moffat scored for OEs as they dominated the first half to lead 28-0.

Charlie Capps got one back for Hull in the second period only after Joe Carlisle and Harry Ledger had gone over to increase Old Elthamians’ lead.

A penalty try plus scores from Sam Wilson and James Tincknell saw the I’s finish the game strongly, but it was too little, too late as Hull fell to their first loss since the beginning of February.

Moseley were left rueing their discipline as they gifted Caldy an opportunity to clinch the game after winning a penalty themselves and opting for a scrum.

The visitors were ahead at half-time as Robert Lewis and Ciaran Moore crossed, but it was a lead of just two points as a Jones kick and John Parker’s try kept Caldy in touch.

Both sides crossed after the break as Laurence Cowen cancelled out Luke Hibberd’s effort before a penalty from Oliver Allsopp looked to have won it for Moseley.

But after winning a late penalty and deciding to go for a scum, the decision backfired on Moseley as they handed Caldy a chance to snatch the victory and Jones duly delivered.

Cambridge earned a welcome win as they beat Old Albanian to move seven points clear of the relegation places.

Alex Rayment and Jake McCloud went over in the first half for the Blood and Sand, but they were behind at the interval as Nick Foster, Jack Daly (2) and Oli Walliker all touched down for OAs.

However, their 14-point advantage was to be overturned as Cambridge blew their visitors away after the break.

Darren Fox, McCloud, and Mike Ayrton went over to give Cambridge the lead before Ayrton, Rayment and Tom Emery completed an important win for Ross Stewart’s side.

Esher ran in five tries as they clinched a bonus-point win over already relegated Fylde at Woodlands.

Joe Beckett went over for the first try after a flowing move from the backs, before Niall Saunders touched down for the second.

Fylde’s Alex Loney added to a first half penalty try and David Fairbrother’s effort to reduce the deficit, but it was merely a consolation as Esher saw out the win.