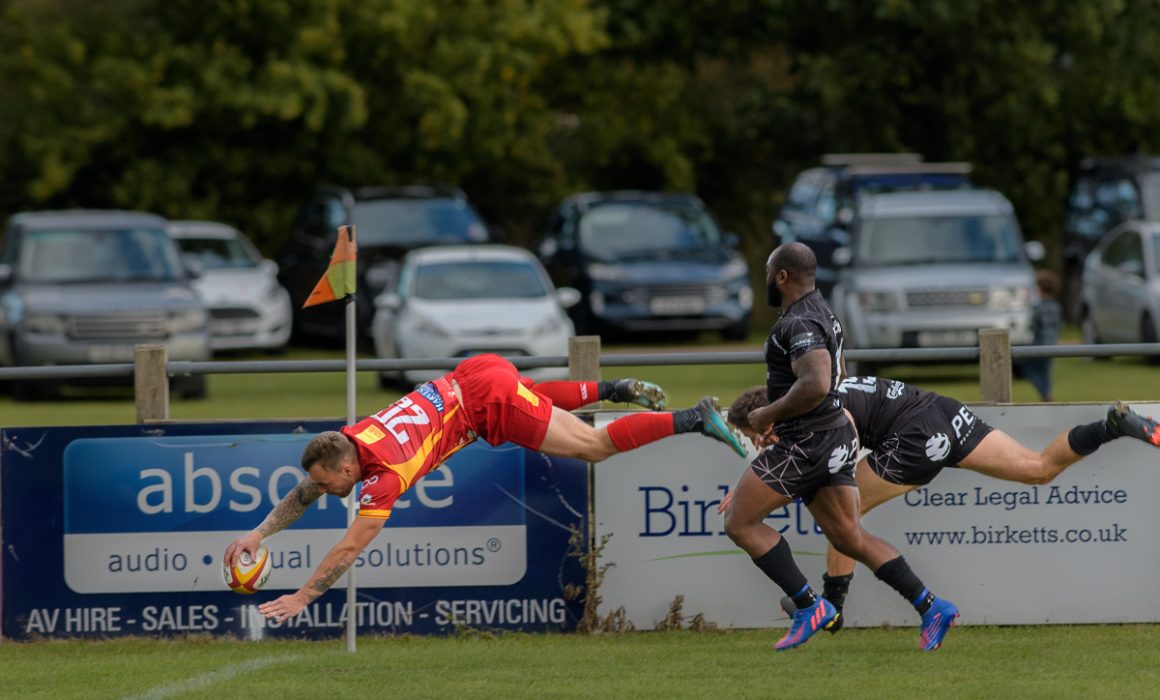 After a strong September for a cluster of National League Rugby sides, 100 per cent records were on the line in Round Five. Photo Credit: (Chris Fell)

Cambridge head into the first ‘Rest Week’ of the term with their 100 per cent start to the season still intact as they inflicted a 32-19 loss on Sale FC.

Both sides entered Round Five aiming to protect their perfect records, and it was the Blood and Sand who led 24-14 at the break with William Priestley, Matt Dawson, Daniel Brough and Toby Dabell all going over.

Tries from Josh Brown and Fergus Mulchrone kept Sale in touch, but Cambridge increased their advantage through the boot of Steff James and a Rian Hamilton score.

Ollie Longmore pulled one back for the North West outfit with 10 minutes to go, however the hosts had done enough to secure their fifth bonus-point win on the spin.

Richie Williams’ side are level on points with Rams RFC (1st) and second-place Rosslyn Park after both clubs also banked maximums to open October.

Mike Austin starred once again for Cinderford as he kicked 13 points to guide the Foresters to a 23-12 success away at Taunton Titans, hooker Harry Wilkinson bagged a trio of tries as Plymouth Albion beat winless Esher 45-29 at Brickfields and Sam Pointon was also in the hat-trick hero club as the full-back crossed on three occasions in Birmingham Moseley’s 43-26 triumph over Hull.

Elsewhere, Leeds Tykes were able to secure back-to-back wins after clinching a 27-24 victory against Chinnor.

The lead changed three times in the opening 40 minutes with Tighe Maxwell-Whiteley landing two penalties and converting Ben Dixon’s try for the Tykes to put them 13-12 up at the break.

Ben Manning and Mark Darlington had replied for Chinnor, but it was the Yorkshire outfit who delivered the first blow of the second period as John Okafor touched down.

Jason Worrall responded almost immediately to cut the gap to three points but after the excellent Maxwell-Whiteley and Josh McNulty had swapped scores, neither side could add to their tally as Leeds Tykes saw out the final quarter.

Sedgley Park maintained their winning start to the National Two North campaign as they beat Hull Ionians 18-10 at Park Lane.

Tries from Ollie Glasse and Rhys Henderson for Sedge – and five points via the tee from Steve Collins – made it 15-7 at the break to the hosts.

George Mewburn had dotted down in the first half for The I’s and a Lewis Minikin penalty cut the deficit to five points with over a quarter of the game remaining.

However, Collins was able to seal the win late on with his second successful three-pointer of the afternoon.

The Tigers remain second in the table and are two points off league leaders Fylde who recorded a fifth successive bonus-point win after thrashing Blaydon 42-7. Tristan Lynch and Tom Grimes both scored braces at Woodlands while third-placed Rotherham Titans clinched a 29-23 victory away at Wharfedale (4th) thanks to Sam Veall’s late try in a pulsating contest at The Avenue.

Chester continued their solid progress at the beginning of this term as they scored 20 unanswered points to defeat Sheffield Tigers 37-15 at Dore Moor, while the feel-good factor around Sheffield remains after they secured a third win from their last four games by beating Preston Grasshoppers 38-17 and Otley have also stayed on an upward trajectory as Eddie Crossland’s last-gasp drop-goal sealed a 25-22 triumph against Tynedale.

Down at the bottom, Harrogate scored two quick-fire second half scores to earn their first win of the season against Huddersfield who have now lost all five of their matches.

Both of these teams would have been keen to open their accounts in Round Five and Will Yates, Tom Baxter and Will Hill gave the visitors a 17-15 lead at the break.

A double from Matt Law and a penalty by Will Milner had kept Huddersfield very much in this contest at Lockwood Park but tries from Peter Olley and James Magee in an eight minute window was enough for Martyn Wood’s side to pick up their first victory in National League Rugby since January.

Blackheath stayed on top of the pile in National Two East following a seven-try, 46-28 win over Bury St Edmunds.

Samir Kharbouch’s try had put Bury 7-0 up after only two minutes, but ‘Club’ proceeded to run riot in a blistering first half display.

Alex Harris, Jake Hennessey, Jake Lloyd (2), Oli Claxon and Markus Burcham all crossed before the break to give Blackheath a commanding 39-7 lead.

However, the Wolfpack came roaring back as Rob Conquest and Will Affleck (2) both touched down to reduce the deficit to 11 points with a quarter of the game to go.

But the early league leaders settled any nerves at Well Hall as fly-half Tom Ffitch converted his own score three minutes from time to secure a fourth bonus-point win in a row for James Shanahan’s men.

Old Albanian sit one point behind the table-toppers after recording a third straight victory. The second-placed side beat Westcliff 38-12 on the road while Dorking produced a nine-try rampage against Rochford Hundred as they won 59-24 and a brace from Will Lewin helped Barnes return to winning ways as they beat Sevenoaks 48-10.

That trio of victorious teams all leapfrogged Henley Hawks as they lost 29-23 to newly-promoted North Walsham who recorded their first win of the National League Rugby season.

The Hawks were 18-14 up at half-time after Ewan Fenley and Alex Bradley tries were added to by the boot of Max Titchener.

After Chris Godwin and Ethan Sikorski had scored in the opening 40 for the hosts, the latter then put North Walsham in front with his second of the afternoon.

Titchener hit back as he converted his own try for Henley, but Frank Scott’s effort on 73 minutes and a penalty from Matt Hodgson clinched a maiden triumph at this level for North Walsham.

Elsewhere, Elliot Luke was at the double as Worthing Raiders beat Canterbury 38-18 and Tonbridge Juddians survived two yellow cards in the second half to defeat Guernsey Raiders 20-10.

Dings Crusaders are now the new leaders in National Two West thanks to an impressive 19-15 victory away at Leicester Lions.

Both sides came into this clash with 100 per cent records to their name and the Lions were also protecting their 16-game winning streak on their own patch.

Soloman Taufa’s score and a penalty try gave the Crusaders a slender 12-8 advantage at the interval, with Simon Johnson going over for the hosts.

His opposite number then increased the lead for the away side as Anthony Welling scythed through to score on 50 minutes. The Lions responded through Aston Gradwick-Light but they couldn’t find the extra push as Dings extended a remarkable run of just one defeat in their last 15 matches.

Clifton are now up to third in the league standings as they ended Exeter University’s winning start to the campaign with a 48-14 victory, despite having Luke Cozens sent off in the first half.

The Lavender and Blacks fly-half was dismissed for ‘verbally abusing’ the assistant referee but Clifton were still able to produce a dominant display.

Exeter, who had recorded four successive bonus-point wins, were unable to add to the scoreboard following Cozens’ red card and only managed tries from Luke Bralsford and Jake Murray.

The top four are now separated by four points with Hinckley and Redruth tucked in just behind. In a feisty all Midlands clash, Hinckley scored two late tries via Josh Leonard and Dale Bowyer to rescue a 35-35 draw against Loughborough Students while it was a far less stressful afternoon for Redruth as they hammered Newport (Salop) 95-7 with Mackenzie Oliver helping himself to a hat-trick.

Meanwhile, Luctonians returned to winning ways with a 31-6 victory over Barnstaple, Old Redcliffians battled back from 15 points down to pick up an excellent 24-20 triumph against Bournville and Stourbridge are off the mark in 2022-23 as Matt Moseley scored four tries in their 55-25 success over Hornets.