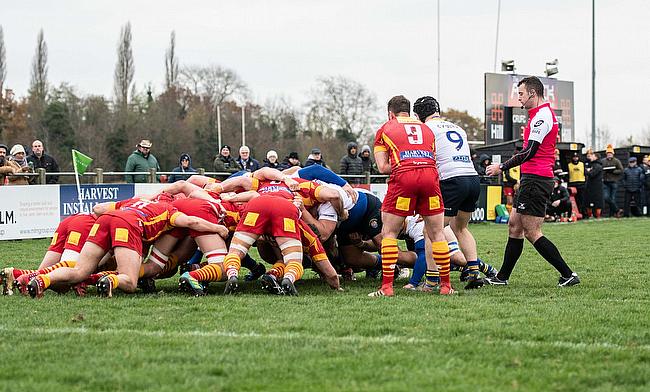 Thirteen matches were postponed across the National Leagues in Round 21, but in all three divisions, there were still plenty of talking points on a weather affected weekend.

In National One, Cambridge stunned promotion chasing Blackheath to dent Club’s title challenge while Old Elthamians are now clear at the summit of the division following an emphatic win over Loughborough Students.

Gavin Lach’s side have a five-point lead at the top after their rivals were not in action due to the bad weather while elsewhere in the third tier, Plymouth Albion beat Cinderford and Bishop’s Stortford’s revival continued as they secured a potentially key victory against Esher.

In National Two North, Fylde capitalised on postponements to put the pressure on their fellow promotion candidates and Warren Spragg’s side are now level on points with league leaders Hull Ionians after easing to a win over Peterborough Lions.

The only other fixture in National Two North saw Otley maintain their strong form by beating Leicester Lions.

In National Two South, London Irish Wild Geese fired up their survival bid once again after snatching a victory against Worthing Raiders. At the top, league leaders Rams RFC stretched their remarkable winning run to 17 matches and second-placed Canterbury stayed in the top two after an excellent win over Redruth.

Meanwhile, Tonbridge Juddians kept themselves firmly in the play-off picture with an away triumph against Barnes and Bury St Edmunds thrashed Old Redcliffians.

Old Elthamians ran in 10 tries against Loughborough Students to move five points clear at the top of National One.

OEs had the bonus point in the bag by 33 minutes thanks to tries from Tom White, George Perkins, Adam Batt and Fred Hosking while second-half tries by Dom Lespierre (2), Perkins, James Golledge (2) and Charlie Dockery saw Gavin Lach’s side home in style.

The only negative for the league leaders was a serious looking injury to Cam Holenstein. We wish him all the best for a speedy recovery.

In terms of Loughborough, scores from Van Dee Ploeg, Victor Keunen and Tim Bitirim, as well as a penalty try, helped them secure a bonus-point in the Midlands.

Cambridge produced a superb second-half fightback to beat promotion challengers Blackheath in an absorbing National One game at Well Hall.

Cameron Ruddock ran in for Cambridge to give the away side the ideal start to the second period and when Kwaku Asiedu dotted down, the visitors were in the ascendency.

Just after the hour, Mike Ayrton scored a converted try as the Blood and Sand went in front having scored 21 unanswered points in 25 minutes and Richie Williams’ side wrapped up their remarkable comeback with a late Ben Penfold penalty.

The win for Cambridge leaves them six points clear of the relegation places while Blackheath are now six points off the top, having played a game more than their title rivals.

Plymouth Albion moved up to seventh place in National One as they extended their excellent run of form by beating Cinderford.

Dan Pointon landed a penalty after the break for Cinderford and the away side reduced the deficit to four points when Nathan Taylor dotted down.

However, Seta Raumakita was able to capitalise on a couple of Cinderford mistakes to score Plymouth’s third and final try of the afternoon, which was enough to seal Albion’s seventh win from their last eight games.

Bishop’s Stortford secured their fourth win on the trot as they beat Esher in a vital game at the bottom of National One.

The impressive Linney completed his hat-trick just before the hour, while Esher hit back via Jack Walsh.

However, the hosts couldn’t make any more inroads as Stortford clinched the victory which leaves them six points clear of the drop zone, while Esher are now three points from safety.

The Lions could only muster up a consolation try from Shaquille Meyers, with Ben Young converting.

With their promotion rivals not in action due to the bad weather, Fylde have moved into the top two and they are only behind Hull Ionians because the Yorkshire side have won more games. As for Peterborough Lions, they remain at the foot of the table and 22 points from safety.

Otley secured their fourth win from their last five matches as they put Leicester Lions to the sword in the Midlands.

The visitors set the tone from the start as Adam Malthouse was sent in for a try after an intelligent run before Josh Hall darted over.

Max Titchener landed two penalties for the hosts to make it 14-6 at the break before the centre and Otley’s Ben Smith exchanged kicks following the interval.

Smith stretched Otley’s advantage with another penalty, but the Lions kept themselves in touch when Ollie Tapscott barged over.

However, any hopes of a comeback were dashed in the final 10 minutes as Ben Magee and Tom de Glanville both crossed for Otley to seal the bonus-point victory.

Rams RFC maintained their charge towards the National Two South title with a convincing eight-try victory over Guernsey at Footes Lane.

Scores from Jamie Guttridge, Conor Corrigan (2) and Greg Illingworth put the league leaders 24-3 up at half-time.

Ben Henderson, Joe Duffelen and Craig Nightingale all crossed to make it 45-3 before Layton Batiste replied for the Raiders.

But further scores from Ross Crame and Guttridge completed the rout for the Rams, who remain 16 points clear at the summit with nine games to go.

Following the postponement of Taunton Titans’ clash with Henley Hawks, Canterbury took advantage of their play-off rivals not being in action as they stormed to a bonus-point victory.

Sean Stapleton, Aiden Moss, Dan Smart, Sam Kenny and Sam Sterling all crossed in the second half for the hosts, who are now six points clear of third-place.

An injury hit Redruth could only manage scores from Aaron Simmonds and Dean Bonds on a tough afternoon at the Marine Travel Ground.

Tonbridge Juddians sealed their fourth win in a row to move up to third place in the National Two South standings as they defeated Barnes.

Toby May’s early score was cancelled out by Robbie Martey, but Hugo Watson’s effort gave TJs a 12-5 lead at the interval.

Ryan Jackson dotted down at the beginning of the second period to extended the advantage for the away side, but Barnes kept in touch when Nick Van Buuren crossed on 54 minutes.

However, a penalty from Will Robinson and Finlay Coxon-Smith’s try ultimately sealed the win for TJs while Josh Davies’ late effort proved only to be a consolation for the hosts.

After defeats against Rams RFC and Tonbridge Juddians, Nick Wakley’s side produced an emphatic response at the GK IPA Haberden.

Alex Grey, Sam Bixby and Cameron Ritchie all crossed in the first period to give Bury a 24-7 half-time lead, with Corey Talbot going over for Old Reds,

The floodgates opened after the restart as Mark Kohler and Jaid Wiltshire both scored twice while Connor O’Reilly also dotted down for the hosts.

Winger Jack Johnson also landed 17 points from the tee as the Wolfpack claimed their first home win of 2019.

A last-minute penalty from Liam Prescott completed a superb fightback from London Irish Wild Geese as they beat Worthing Raiders to keep their survival hopes alive in National Two South.

Wild Geese, who are now 11 points adrift of safety following this win, took the lead through full-back Reuben Knight.

But the home side were 19-7 behind at the break after Matt McLean, Harry Barlow and Harry Forrest had all touched down for Worthing.

The hosts produced aresponse after the interval as Josh Amadi and Sean Cunningham both went over to level the game up.

And there was to be one final twist as Prescott held his nerve to snatch a potentially crucial victory for the Wild Geese.