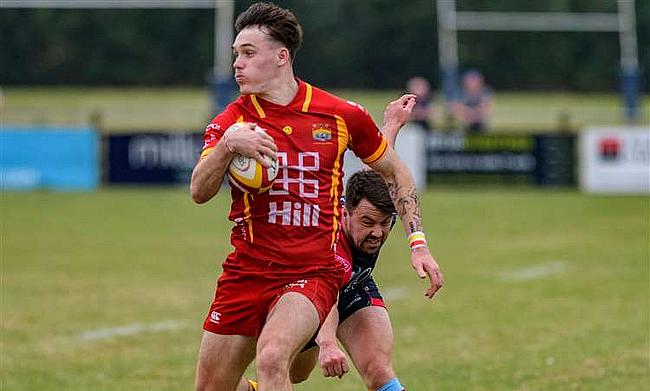 The Blood and Sand’s excellent victory over Rosslyn Park halted the National One league leaders, with Sale FC the side to profit in Round 13. (Photo Credit: Chris Fell)

Rosslyn Park saw their run of six straight wins come to a halt in Round 13 as Cambridge defeated the National One league leaders 34-29.

The visitors were ahead 14-12 at half-time with tries coming from Brandon Jackson and Hugo Ellis, with Will Wand and Matt Hema dotting down for Cambridge.

A penalty from home fly-half Marc Koteczky pushed the Blood and Sand in front, but Jackson’s second put Park in the ascendency.

But efforts from Wand and Joe Patrick – either side of Nick Scott’s try – saw Cambridge move into a three-point lead with a quarter of the match remaining.

The hosts then came up with the fatal blow when they were awarded a penalty try late on, but Park still managed to leave Grantchester Road with two bonus points after Nick Lovell touched down from close range.

The defeat for Kieran Power’s side means their lead at the summit has been cut to eight points after Sale FC secured their sixth win on the bounce by beating Blackheath 34-28.

Chris Johnson starred at fly-half as he kicked 14 points for the North West outfit, while Nev Edwards crossed twice at Well Hall.

"I think to do it in the manner in which we did on Saturday is a real positive for this group, and highlights the clear progress that we’ve made since the start of the season."

James Robins and Andy Hughes bagged a try apiece on an afternoon which ebbed and flowed.

Harry Holland, Jake Lloyd and Jake Hennessey scored for a Blackheath side who were always in the contest, but ‘Club’ couldn’t halt Sale’s charge as Jonathan Keep’s men marched on.

Down towards the other end of the table, Bishop’s Stortford held on to beat Chinnor 23-19 as they moved out of the bottom three.

After leading 13-12 at the break following tries from Oliver Betteridge and Dan Powell, Joss Linney’s score on the hour proved decisive in securing Stortford’s fourth win of the campaign.

Morgan Veness and Will Millett had gone over for Chinnor in the first period, with England Sevens star Max Clementson scoring after the break, but this was another afternoon where the Black and Whites found themselves on the wrong end of a tight scoreline.

Elsewhere in National One, Cinderford’s title aspirations were dented once again as the mercurial Warren Seals guided Darlington Mowden Park to a 26-7 victory whilst another fly-half, Ben Jones, helped Caldy move into fourth place following a 20-3 win against Rams RFC.

In the battle of the newly promoted sides, Taunton Titans edged it as they won 24-21 away at Tonbridge Juddians. Plymouth Albion v Leeds Tykes was postponed due to Covid-19 concerns.

Sedgley Park delivered another cutting-edge display as they romped to a bonus-point, seven-try win over Loughborough Students.

Tries from Steve Collins, Jacob Tansey and Rhys Henderson set the tone for the afternoon and despite Dan Eckersley going over for the Students, Ollie Glasse wrapped up Sedge’s bonus-point on 47 minutes.

The fluid nature of the table toppers’ recent performances continued as Matt Gallagher grabbed a brace before Andy Riley finished off an eye-catching move to put the icing on the cake.

Nick Jennings had gone over for Loughborough midway through the half, but it was merely a consolation.

Rotherham Titans remain on the heels of the league leaders as they stretched their unbeaten run to 12 matches with a 26-10 victory against Harrogate.

The second-placed side opened up a half-time lead thanks to tries from Matt Minogue and Harry Newborn before Tom Lewis made it 19-3 just after the interval.

👀 Can’t wait to watch this https://t.co/wXQucNGJNE

Steve Maycock got Harrogate on the board, but the familiar sight of Callum Bustin charging through to score secured the win for Rotherham.

Hull are level on points with the Titans as Gary Pearce’s men once again proved their superb season isn’t a flash in the pan following a 22-14 triumph over Fylde.

In front of the National League cameras, Mike Adlard dived over in the corner to open the scoring but Marcus Blake hit back on 23 minutes.

Ben Boothman’s effort gave the hosts the lead at the interval, but a quite simply remarkable move ended with Greg Smith touching down to put Fylde back in front.

However, Hull benefited from two Fylde yellow cards as both Stephen Johnson and Tipiloma Kivalu profited when the Lancashire club were down to 14-men.

Stourbridge are also neck and neck with Rotherham and Hull as Joe Heatley’s hat-trick helped them to an excellent 42-15 win against Hull Ionians whilst Chester are into the top eight after a 33-21 success over Blaydon.

Elsewhere, Nick Bingham, Will Bennett and Greg Mellor all crossed as Sheffield Tigers defeated Luctonians 27-0, Tynedale ran in seven tries to impressively beat Bournville 48-12 whilst a brace from winger Bradley Viner saw Wharfedale claim a 20-12 victory away at Huddersfield.

Esher now lead the way in National Two South after a 26-0 victory over Canterbury at Molesey Road.

Andrew Hamilton and Tom Mitchell scored tries in the first half, while Harvey Scott and Hugh Sloan added scores in the second period.

The other reason why Esher are now top of the pile is because Redruth failed to secure a bonus point in their 15-0 win against Dings Crusaders.

However, all of the points in this contest came in the first period as Nigel Hambly’s side couldn’t quite find the extra gear to secure a maximum at The Recreation Ground.

Final score Esher 26 Canterbury 0. Another great bonus point win, although Esher were made to work hard all afternoon to overcome a tough Canterbury outfit. Great effort from both sides and good luck to @cantrugby for the rest of the season.

Alex Howman scored four for the Lavender and Blacks and the winger crossed to give his side an early lead while Max Woodward went over soon after.

Howman scored his second of the afternoon and then wrapped up his hat-trick on 27 minutes.

Mitchell Spencer and Alex Forrester touched down either side of Howman’s fourth while Sam Turner completed the scoring late on.

Chris Shields dotted down for Rochford Hundred’s only try of the match and even when Clifton had two players in the sin-bin in the second period, the visitors could not add to their total.

Worthing Raiders are still level on points with Clifton after recovering from a slow start to hammer Westcliff 52-12 whilst Leicester Lions made it six wins on the spin after an impressive 36-30 victory away at Henley Hawks.

Elsewhere, Barnes are now unbeaten in four after an excellent 35-19 win at Old Albanian and Hinckley continued their good recent form with a comprehensive 46-13 triumph against Barnstaple. Guernsey Raiders v Bury St Edmunds was postponed due to Covid-19 concerns.

Don’t forget, we are also Live Streaming this Friday’s clash between Rams RFC and Chinnor for FREE. You can watch via our website, Twitter and Facebook channels!