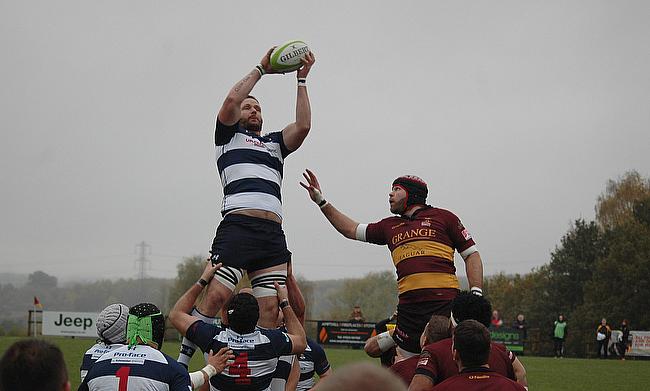 After Coventry made it thirteen straight victories in National One last weekend, the league leaders now prepare to take on fourth placed Ampthill and District with the aim of strengthening their position at the top.

Rowland Winter’s side are 12 points clear and after a victory over Plymouth Albion, another win against a side just below the Midlands club would keep them firmly on track for the title with second placed Darlington Mowden Park to come before the Christmas break.

However, if Ampthill were to be the first side to inflict a defeat on Coventry in 21 league matches then it would open the door for themselves and the other sides in the top places in the division to potentially challenge the table toppers.

The aforementioned Mowden Park will be keeping a close eye on proceedings in Coventry when they travel to Fylde while elsewhere in the top half, Blackheath host Caldy, Bishop’s Stortford welcome Loughborough Students while Old Elthamians visit Old Albanian.

Meanwhile, Esher take on Cambridge and there is a key game at the bottom as Rosslyn Park travel to Hull Ionians.

Plymouth Albion’s trip to Birmingham Moseley has been postponed.

Coventry’s forwards coach Louis Deacon said this week that the National One league leaders are ‘keeping their feet firmly on the ground’, but victory over fourth placed Ampthill and District this weekend would certainly be a significant step in their bid for promotion. The Midlands club are currently 12 points clear at the top of this division having won all 13 of their matches thus far. Cov overcame Plymouth Albion in their last home outing so can they do the same to another possible promotion candidate in Round 14?

INTERVIEW ?
DoR @RowlandWinter is proud of how his team stepped up in response to a difficult first quarter at @rosslynpark

Rowland Winter’s side have not lost at Butts Park for 14 months so the task facing Ampthill will be a tough one.  Last week, any ambitions the A’s may have to challenge Coventry suffered a massive dent as they were beaten late on by second placed Darlington Mowden Park, leaving them 17 points behind their hosts for this Saturday. There is still a slight chance that Ampthill could catch Cov, but anything other than a victory this weekend would probably end their hopes of promotion for a third season in a row.

Last week, Adam Radwan’s late try for Darlington Mowden Park would have felt like a noteworthy moment in their season. Danny Brown’s men battled to victory over Ampthill & District in order to just about keep Coventry in sight and they’ll be hoping the league leaders won’t have disappeared from their vision following their trip to Fylde this weekend.

DMP have won all seven of their home matches so far this campaign, but they travel to Lancashire having not tasted victory on the road since September. They take on bottom of the table Fylde in Round 14, but the northwest side should not be underestimated. Head Coach Warren Spragg signed a new contract with the club at the start of the month and his side delivered last weekend as they clinched an excellent win over Bishop’s Stortford. Once again, they are back at Woodlands on Saturday and they will be eager to upset the odds for a second time as Fylde aim to dig themselves out of trouble.

Blackheath’s win away at Cambridge last Saturday was exactly what the doctor ordered for James Shanahan’s side. ‘Club’ had won just one of their previous four matches prior to their trip to Volac Park, but they were able to begin December on a positive note with a hard-fought victory. The men from Well Hall currently occupy fifth in the table and considering they are 21 points off Coventry, it looks as though Blackheath will just be focused on finishing as high as they can this term.

Next on the agenda for Shanahan’s men is the visit of Caldy who may have newfound confidence following an important win last weekend. Simon Verbickas’ men cruised to a victory over fellow strugglers Old Albanian and after two triumphs from their last three matches, the Wirral side are now four points clear of the relegation places. However, only one of their four victories this season have come on their travels and considering Blackheath have been relatively strong at home, this will be a difficult test for Caldy.

A six game unbeaten streak came to an end last Saturday for Bishop’s Stortford. Andy Long’s men were beaten late on by Fylde, but that would have only taken a small amount of gloss off what has been an excellent season for his side. Having clinched the National Two South title, Stortford have certainly made their mark at this level as they currently accommodate sixth place in the table and they will be itching to return to winning ways this weekend when they welcome Loughborough Students to Silver Leys.

However, Stortford will have to be wary as they face a Loughborough Students side which seems rejuvenated. In the middle of October, the Midlands club were really struggling for form, but four wins from their last five matches has seen them jump out of the relegation places and up to 12th in the table. The Students are far from comfortable though, as they sit just three points clear of the drop zone, but they head south this weekend on the back of three straight wins and they will be in a confident mood that they can continue their excellent recent form.

It was certainly an early Christmas present for Old Elthamians in Round 13. Following three successive defeats in the month of November, Gavin Lach’s men kicked off the festive season with a superb display to see off Birmingham Moseley. The National Two play-off winners are enjoying their first ever season in the third tier and as we head towards the halfway point of the campaign, OEs occupy eighth in the division.

The men from College Meadow are 11 points clear of the bottom three and one of those sides in the danger zone are Old Albanian. OAs have been hit by injuries this term, but they now sit eight points from safety after a damaging defeat to Caldy last weekend. Gavin Hogg’s tenure at Woolams has been tough thus far, but a fourth win of the campaign on Saturday would be most welcome as the Hertfordshire club continue their fight to beat the drop.

Esher’s season continued in the same pattern last weekend. The Surrey-based side once again fell to an away defeat following a home triumph which means they have now lost all six of their matches on the road this term. However, their performances on their travels takes a back seat this Saturday as Esher are back on home soil where they have put in some excellent displays so far this term.

They have won five of their seven matches at Moseley Road which is the sole reason why they are ninth in the division and they host a Cambridge side who are just a place and a point behind them. Ross Stewart’s men have had a dip in form and they enter this weekend having won just one of their last five matches. The Blood and Sand have done well to avoid any potential relegation scrap thus far so they will be keen to end this blip in results sooner rather than later otherwise a repeat of last season’s battle for survival could be on the cards.

Back to back home wins in November lifted Hull Ionians out of the bottom three and the Yorkshire side will be aiming to continue their excellent recent form at Brantingham Park this weekend as they entertain Rosslyn Park. The I’s are 13th in the table and three points clear of the relegation zone, but it is their inconsistencies which are holding them back from progressing away from trouble.

The 1st XV are heading to Yorkshire this weekend to play @Ioniansrufc in the league.

In the last eight games, Alex Crockett’s men have won four and lost four matches, with all of the victories coming at home. In contrast, Rosslyn Park are just desperate for a win. The London based side have not won since the middle of October and they now find themselves in the relegation zone and a place behind Hull Ionians in the table. Kieran Power’s side have triumphed on just three occasions this term and a defeat in Round 14 would just enhance predicament Park are currently in.