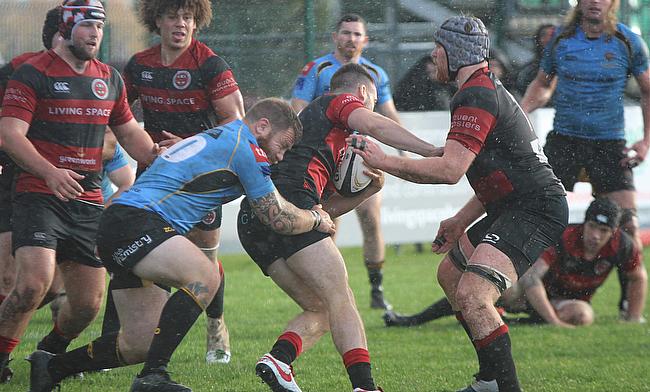 We have arrived at the final 10 games of the season (for the majority of clubs) and across all three leagues, there are stories still waiting to be written. (Photo Credit: Phillipa Hilton)

It is hard to actually know which division to focus on. From gripping title races to teams suffering the frustrations of relegation battles, there is plenty of National League action to get stuck into as we wave goodbye to January.

In National One, it feels like Rosslyn Park have been in a promotion scrap for the last 12 months but their latest effort to claim top spot needs reigniting when they take on Cambridge in Round 21 following successive away defeats.

Down at the foot of the table, Birmingham Moseley could distance themselves from the drop zone if they overcome bottom of the table Canterbury and with rivals Rotherham Titans taking on fourth-placed Chinnor, this could be a window of opportunity for Adam Balding’s charges.

In National Two North, there is quite an intriguing fight for survival unfolding so Wharfedale’s clash with Huddersfield could be significant as both sides look to move away from trouble whilst in National Two South, the spotlight falls on Dry Leas as second-placed Henley Hawks host league leaders Tonbridge Juddians with just one point separating the two teams.

Below is a more in-depth look at the key games in Round 21:

As the final 10 games of a compelling National One season begin this weekend, Richmond will be hoping the situation at the top of the division remains the same between now and the end of April. Steve Hill’s side have battled their way back to the summit of the third tier and if they are to continue the recent form they have shown over the last month, an immediate return to the Championship should be theirs.

With a potential sticky period of fixtures against the likes of Chinnor, Blackheath and Rams RFC expertly negotiated, Richmond now begin February with a three-point lead and a trip to 10th placed Cinderford. The Gloucestershire outfit were on the wrong end of late drama last weekend as a first away victory of 2020 was snatched from their grasp by the aforementioned Chinnor. In truth, Paul Morris’ side will be glad to see the back of January as they picked up just one victory, but having beaten Richmond at the Athletic Ground earlier in the season, the Foresters will be keen for a similar outcome and a winning start to the month.

Third-placed Rosslyn Park were beaten 24-20 by Cambridge back in October and Kieran Power’s side will be desperate to avoid a repeat of that result if they are to keep their promotion ambitions alive. Last time out, Park suffered their second away loss on the spin and defeat to Plymouth Albion means the men from the Rock are now seven points behind leaders Richmond.

"We’ve really found the form that we probably deserve because of what the guys have been doing behind the scenes and on the field."

To an extent, the ball is in Rosslyn Park’s court. The London-based side still have to play their near neighbours Richmond and title rivals Rams, but they can’t really afford too many more setbacks. Having lost to Cambridge already this term, they will be fully aware of the challenge that awaits them on Saturday but also, the Blood and Sand head to the capital in blistering form. Richie Williams’ side have won their last six games – something they have never achieved in National One – and they will not be fazed by facing one of the promotion candidates in Round 21.

At the other end of the division, Birmingham Moseley have a real chance to potentially move further away from the trapdoor to National Two. Just one victory from their last 11 matches has left the Midlands club eight points clear of the bottom three and a recent defeat against fellow strugglers Rotherham Titans didn’t easy any nerves at Billesley Common. However, their performance in a narrow 23-22 loss against Old Elthamians in Round 20 pleased Director of Rugby Adam Balding and he’ll be hoping his side can carry those positive into their clash with bottom of the table Canterbury this weekend.

Whilst Moseley can still see an immediate future in National One, the same cannot be said for the City Men. Andy Pratt’s side are 27 points off safety with 10 games remaining so it would take an almighty turnaround if Canterbury were to remain in the third tier. If their situation seems bleak, the players are certainly not showing any signs of feeling sorry for themselves as they were minutes away from claiming their second victory of the campaign against Cambridge last time out. If they show that fight and desire at The Marine Travel Ground this weekend, they may well put a dent in Moseley’s survival bid.

Elsewhere in National One, second-placed Rams will be aiming to keep the pressure on Richmond when they host Blackheath in an intriguing contest Old Bath Road whilst Chinnor, who sit fourth, visit Rotherham Titans. Also this weekend, Darlington Mowden Park travel to Old Elthamians, an in-form Plymouth Albion go to Sale FC and Bishop’s Stortford entertain Hull Ionians.

A potentially defining month for Caldy is upon us, but quite frankly, the National Two North table toppers will not be nervous by what is to come. Gareth Davies’ side are waltzing their way to the league title as last weekend, they clinched a 19th successive victory with Hull being the latest victims to be swatted away by the runaway leaders.

Their results in February could all but rubber stamp their immediate return to National One as the Wirral outfit do face top two contenders Sedgley Park twice, with a fixture against second-placed Fylde sandwiched in between. However, first up for Caldy is a trip to Otley and the hosts on Saturday are having contrasting fortunes to their visitors as the Yorkshire club now find themselves embroiled in a relegation battle. A combination of three straight defeats, along with the teams around them also picking up crucial wins, means Otley are only outside the bottom three by virtue of ‘Games Won’ so anything from this clash at Cross Green may well be seen as bonus for Charlie Maunder’s side.

In recent weeks, it might fair to suggest Fylde have really hammered home their position in the top two. Losing to Huddersfield in the middle of January clearly angered Warren Spragg’s men and second-placed side have retaliated in the best possible manner to take control of their own destiny.

#Fylde name an unchanged squad for the visit of @Hinckley_Rugby to the Woodlands on Saturday, ko 3pm. Full squad at https://t.co/GeAArwooFE

After thrashing Tynedale 50-10, the Lancashire club thumped Stourbridge 64-12 in the Midlands last time out, but only the most optimistic of Fylde supporters will believe another comfortable afternoon is on the cards when they host Hinckley in Round 21. The Hornets are one of the form sides in the league having won their last five matches, including a scintillating display against top two candidates Sedgley Park. The men from Leicester Road have only lost once since November so they will provide a stern test for Fylde this weekend.

Down towards the bottom, Huddersfield’s revival gathered pace in January and three successive wins for Gareth Lewis’ side is part of the reason why the battle for survival has intensified since the turn of the year. Field have gone through the gears in recent weeks and after beating Fylde, back-to-back victories over Scunthorpe and Preston Grasshoppers means the men from Lockwood Park are now one point clear of the drop.

With this is mind, their visit to Wharfedale on Saturday cannot be underemphasised. The hosts also reignited their campaign at the beginning of 2020 and head into this weekend on a three-match unbeaten run, which includes an excellent triumph against Sheffield Tigers last time out. The Greens are one point better off than Huddersfield so whoever takes the spoils at the Avenue in Round 21, will be taking a potentially vital step towards safety.

Also across National Two North this weekend, Sedgley Park will be looking to bounce back when they host Chester whilst Loughborough Students travel to a Hull side who have slowly been dragged into a relegation dogfight. Elsewhere, Sheffield Tigers go to 14th placed Luctonians, Stourbridge visit Scunthorpe and Tynedale entertain Preston Grasshoppers.

The season-long battle for the title in National Two South enters its latest episode this weekend with the top two set to clash. League leaders Tonbridge Juddians moved back into pole position in Round 20 following their convincing victory over Worthing Raiders and Peter Dankert’s side now hold a one-point lead at the summit.

Last Saturday, TJs dislodged Henley from the number one spot as the Hawks fell to a defeat away at an in-form Redruth. Nigel Dudding and Luke Allen’s side would have been disappointed to suffer their first loss since the beginning of November but their title hopes, and indeed promotion hopes, are far from over just yet. Henley did beat fellow top two candidates Taunton Titans at Dry Leas three weeks ago, so a similar outcome against a rival would see them move to the top of the pile, but if the Hawks were to lose to a strong TJs outfit, it would put a serious dent in their aspirations.

Taunton Titans and Westcliff are both harbouring different ambitions as we begin the final 10 games of the campaign. For the Somerset club, they are still in the promotion hunt and Tony Yapp’s side will certainly be keeping tabs on events in Henley as victory over Westcliff could see the Titans jump back into the top two positions.

After losing to the Hawks in Round 18, Taunton responded with a superb win over Tonbridge Juddians before edging past Old Albanian last time out and it has left them just five points off the top as things stand. In terms of Westcliff, they are slowly moving towards safety in National Two South but their situation could have looked slightly different if full-back Jake Spivey had not of scored a late try to save a draw against Bournemouth last week. Peter Mahony and Jacob Ford’s side are now 13 points clear of the drop, but having not tasted defeat in any of their last three matches, a positive result at the Towergate Stadium would be another step towards securing their National Two status.

Barnes are still in a good moment, despite losing to Leicester Lions last week. Across the course of December and January, Joe Gray’s side strung together four wins from five matches and that run of form has helped the London-based side move away from the epicentre of any relegation trouble.

As things stand, Barnes are 16 points clear of the drop and this Saturday, they travel to a Sutton & Epsom side who would kill to be in the position their visitors currently occupy. This clash at Rugby Lane may feel like a key fixture for S&E in the battle against the drop as Jeff Parsons’ side find themselves 15 points from safety, with a game in hand. The Black and Whites did beat Barnes 41-25 back in October and a repeat of that result could be the spark Sutton & Epsom need.

Also in National Two South this weekend, fourth-placed Redruth will be keen to continue their momentum when they travel to Bury St Edmunds and Clifton take on Bournemouth, with the latter still trying to dig themselves out of the bottom three. Meanwhile, Leicester Lions entertain Dings Crusaders, Esher visit Bristol to face Old Redcliffians and Worthing Raiders host Old Albanian.