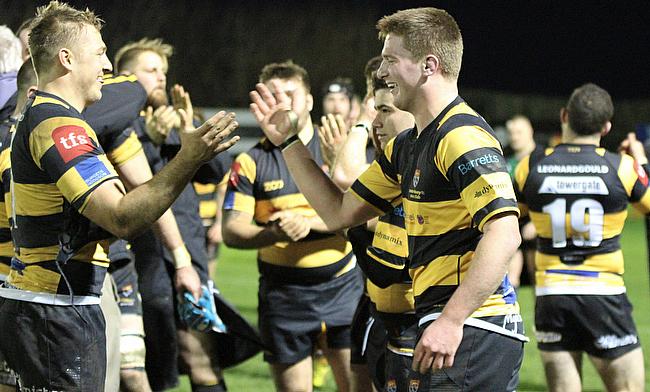 Canterbury recorded their first win of the National One season as they defeated Cinderford at the Marine Travel Ground. Photo Credit: (Phillipa Hilton)

The division’s bottom club, who won promotion to the third tier for the first time in their history back in May, had lost all 13 matches heading into the opening weekend of December, but Andy Pratt’s side ended their drought.

The City Men are now 22 points from safety so there is still an awful lot of work to be done if Canterbury are going to pull off a great escape, but defeats for all six of the teams above them certainly helped their cause in Round 14.

Relegation rivals Hull Ionians were narrowly beaten by Plymouth Albion and Rotherham Titans were blown away in the second-half against Old Elthamians whilst Cambridge lost to title-chasing Richmond and Birmingham Moseley suffered a defeat at home to Chinnor.

In terms of the aforementioned Park, they are back at the summit of National One by virtue of ‘Games Drawn’ whilst only five points separates the top five following Darlington Mowden’s Park win over Blackheath.

Rosslyn Park edged their way back to the top of National One after an excellent display against Bishop’s Stortford.

Park were clinical in the first half as a brace from Henry Cheeseman and a penalty try gave them a 24-6 lead at the break.

Arthur Ellis and Jack Gash were able to wrap up the win for the hosts whilst Nick Hankin and James Apperley scored Stortford’s consolations.

Park are level on points with second-placed Richmond, but Kieran Power’s side are at the summit by virtue of ‘Games Drawn.’

Richmond continue to go toe-to-toe with Rosslyn Park after they recovered from a slow start to defeat Cambridge.

A converted try from Matt Hema put the hosts in front and a score from Andrew Henderson doubled Cambridge’s advantage whilst Richmond saw Jeremy Cunnew and Bryan Hodge sent to the sin-bin.

The ill-discipline didn’t stop there as both sides received two yellow cards apiece before the break with Richmond needing a huge second-half if they were to return to winning ways.

And Steve Hill’s side were able to deliver. Tom Hodgson got the ball rolling as he landed his second penalty of the afternoon before a brace from Morgan Ward, as well as Toby Dabell’s effort, sealed a hard-fought win for Richmond.

Rams RFC claimed their fifth win from their last six matches as they came away from Sale FC with a victory.

Rams took control of the scoreboard in the first half, with Jack Moates and Ben Henderson dotting down from close range to give the visitors a 14-0 lead.

An interview🎥 with Seb Reynolds Head Coach of RAMS Rugby as he discusses Rams excellent victory against Sale FC.🔥@nca_rugby pic.twitter.com/fPpEWvhz9A

Sale’s dominance of possession and territory wasn’t rewarded in the opening period, but after the break, it was first blood to the home side as Teddy Leatherbarrow rumbled over.

The hosts continued to press, but Rams were the next to score on 70 minutes through Kieran Leicester before Jak Rossiter dotted down to make sure of the win for Seb Reynolds’ side.

Sam Dugdale and Andy Hughes both scored to earn Sale FC a bonus-point, but Rams held on to leave themselves just one point off the top.

Chinnor are up to fourth in National One after a gritty victory over Birmingham Moseley extended their unbeaten run to six matches.

Tries from Jason Worrall and Joe Dancer helped Chinnor into a commanding 17-0 lead, but Moseley then sparked into life.

Ben Palmer pinged over four penalties for the hosts before Morgan Dawes thundered over after a surging break.

The scores were now level with 12 minutes remaining, but Worrall raced over for his second to hand Chinnor the lead and despite intense pressure from Moseley late on, Matt Williams’ side saw out the victory which leaves them five points behind table toppers Rosslyn Park.

Darlington Mowden are now just five points off league leaders Rosslyn Park as they comfortably saw off Blackheath, who had Stef Liebenberg sent off inside the opening minute of this contest.

The ‘Club’ scrum-half was dismissed for a high tackle on DMP’s Morgan Passman which led to the Newcastle Falcon being stretchered off.

Centre Ollie Walker did open the scoring for DMP, but full-back Ben Ransom and wing Craig Dowsett touched down for Blackheath to give the visitors the lead.

However, the hosts led at the break thanks to a converted Callum Irvine try and a Warren Seals penalty.

After the restart, Mark Cooke levelled the scores from the tee for ‘Club’ but another try for Walker, as well as second penalty from Seals, opened up a 10-point gap for DMP.

And it was the home side who had the final say on proceedings as Ben Dixon rounded-off a solid display by securing the bonus-point for DMP.

Canterbury secured their first win of the National One campaign as they defeated Cinderford to end their 13-game losing run.

RUGBY: A first win of the season in National One for Canterbury, 19-17 winners against Cinderford. ?? https://t.co/GzsqNroz4J

Canterbury had led 12-0 in the first half after tries from Will Scholes and Ricky Macintosh, but Cinderford pegged their hosts back as Sam Smith raced over before Ed Bouge dotted down to level the scores.

The visitors were starting to heap pressure on Canterbury, but the City Men had other ideas as Sam Sterling scored the winning try with minutes remaining as Andy Pratt’s side clinched their maiden victory at this level.

Rotherham Titans’ winless run was extended to seven games, but Old Elthamians had to come from behind to beat the Yorkshire outfit.

OEs scored seven tries, however, they found themselves 18-8 down at the break as Jack Bergmanas and Will Hughes crossed the whitewash for the Titans.

Ollie Bryant went over just before half-time for OEs, but after the interval, the home side were rampant and raced to victory.

George Eastwell (2), Louis Brown, Alex Goble and Rhys Morgan all dotted down as OEs completely blew Rotherham away and the loss for the Titans means they are now 12 points from safety.

Plymouth Albion have stretched their unbeaten streak to three matches as they defeated Hull Ionians in a highly entertaining contest at Brickfields.

Albion were able to build on last week’s superb win over title-challenging Richmond as they secured their sixth victory of the campaign.

Alex Ducker, Rus Tuima, and Sam Morley all went over to give the hosts a 20-12 half-time lead, with Hull Ionians scoring through Billy Hardy and Max Titchener.

However, the hosts kept their composure in defence and were rewarded as Ducker’s second and a score via Jamie Salter gave them a 13-point cushion.

Hull were determined not to leave Devon empty handed and Will Stowe’s try right at the death clinched two well deserved bonus-points for the Yorkshire side.