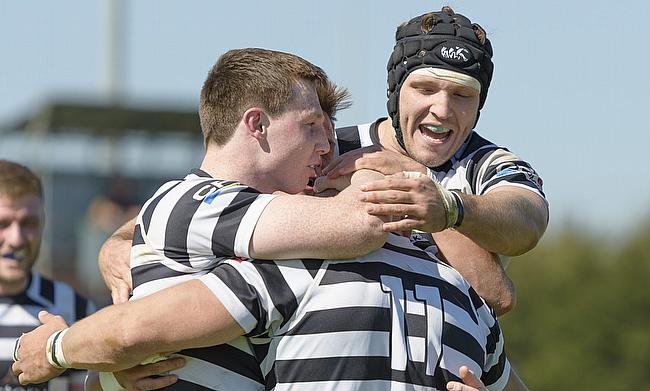 Chinnor made a dream start to life in National One as they toppled Plymouth Albion on the opening weekend of the season.

Newly promoted Chinnor became only the second team to beat Albion at Brickfields in just over a year and considering Plymouth finished third last term, this is an early setback for Kieran Hallett’s side.

Another standout result in National One saw Old Elthamians secure an excellent victory over recently relegated Rotherham Titans. OEs ended the campaign in sixth last year and their victory in Yorkshire suggests they are looking to build on that achievement.

Sale FC had to settle for a draw in their first fixture in National One after a scintillating clash with Cambridge while fellow newcomers Cinderford lost out to Rosslyn Park at home.

Elsewhere, Blackheath are the early leaders after a commanding display against Esher while there were also wins for Ampthill and District, Darlington Mowden Park and Caldy.

Tom Williams, Clements-Hill and Joe Tarrant secured Blackheath’s bonus point in the second period whilst the hosts failed to get themselves back into the contest.

Ampthill and District edged a 12-try thriller to hold off Loughborough Students in their National One opener, with Aleki Lutui claiming a hat-trick for the home side.

Lutui and new signing Soane Tonga’uiha crossed for the A’s, but Loughborough hit back with two tries of their own via Will Brown and Thibaud Flament.

The hosts then suffered a setback as captain Billy Johnson was shown a straight red card on 21 minutes, but it didn’t discourage Ampthill as Lutui grabbed his second try while James Pritchard slotted over a penalty to make it 24-10.

After the break, The A’s took the game away from the Students in a flash as Lutui completed his hat-trick while Sam Baker and William Allman also dotted down.

However, despite trailing by 33 points, Loughborough rallied to secure a bonus point as Aaron Tait, Charlie Reed, Max Hill and Flament all crossed, but it was too little, too late as Ampthill saw the contest out.

Ben Marfo’s try was swiftly cancelled out by Terence Babarinsa, but Park’s Hugo Ellis, Owen Hughes and Nick Lovell all crossed to see the away side go 21 points clear.

George Boulton and Henry Robinson exchanged scores after the break, but Aaron Ryan’s effort and a penalty try brought Cinderford right back into the contest.

Trailing 33-26, there was still a chance for the Foresters, but their glimmer of hope was stamped out as Olly Grove pinged over a penalty to seal it for Park.

Liam Hemming did make sure Cinderford begun the season with two points rather one as he landed a penalty right at the death.

Darlington Mowden Park held on to earn a hard-fought victory over Bishop’s Stortford at Silver Leys.

After a scoreless first period, Ralph Appleby put last year’s runners-up ahead but Stortford responded with two penalties from George Cullen and a penalty try.

That gave the hosts a 13-7 lead, which Warren Seals wiped out as he converted his own score.

Stortford nudged themselves back in front via the boot of Cullen, but Mowden Park struck the decisive blow when Chris McTurk and new signing Chris Georgiou both crossed.

The home side battled back with three minutes to go as Rob Duffy dotted down, but it wasn’t enough as DMP began the new term with a win.

Rotherham Titans started life in National One with a defeat as Old Elthamians clinched an enthralling victory at Clifton Lane.

The Yorkshire side, who were relegated from the Championship last season, led 19-17 at half-time thanks to tries from Sebastian Nagle-Taylor (2) and Tom Allott.

Dom McGeekie and Dom Lespierre both touched down for OEs in the first period and the visitors put their foot down after the interval.

Scores from Hamish Barton and Harry Ledger, plus a Tom White penalty, put the visitors 34-19 up with three minutes remaining, but the Titans fought back.

Allott and Nagle-Taylor both dotted down again, but it wasn’t enough to snatch the victory.

Chinnor produced an excellent second-half performance as they beat Plymouth Albion to open their National One account with a victory.

Tom Burns scored the first try of the match after the break to extend Chinnor’s lead, but Teegan Minkley’s effort kept Albion in touch.

However, Ryan kicked his fourth penalty and a late try from Craig Holland wrapped up a superb win for the newly promoted side.

Caldy began the new season with a storming victory over Birmingham Moseley at Paton Field.

Simon Verbickas’ side trailed 17-10 at the break following scores from Moseley’s Taraiasi Wara and Joshua Poole.

Nick Royle had crossed for Caldy in the first period, but the hosts found themselves further behind after the interval as James Williams landed his second penalty before Poole darted over again.

Caldy were reduced to 14-men when Derek Salisbury was yellow-carded, but after he was dismissed, the home side sparked into life.

Ben Jones kicked two penalties either side of Royle’s second score to reduce the deficit to four points and Caldy’s comeback was complete when Josiah Dickinson went over three minutes from time.

Sale FC’s Simon Griffiths scored a late try as the newly promoted side shared the spoils with Cambridge in an 11-try thriller.

Griffiths, Adam Aigbokhae and Matt Postlethwaite crossed to put Sale 19-0 up before an Ean Griffiths try and a Jack Green penalty got the hosts up and running.

However, Arron Reed’s try secured Sale’s bonus-point just before half-time to give them a commanding lead.

Aigbokhae scored his second to edge Sale further in front, but Cambridge produced a remarkable fight back to overturn a 21-point deficit.

Griffiths, Steve Hipwell and Ashley Elvers (2) all crossed to give the Blood and Sand the lead, but Sale’s Griffiths rescued a draw at Volac Park.