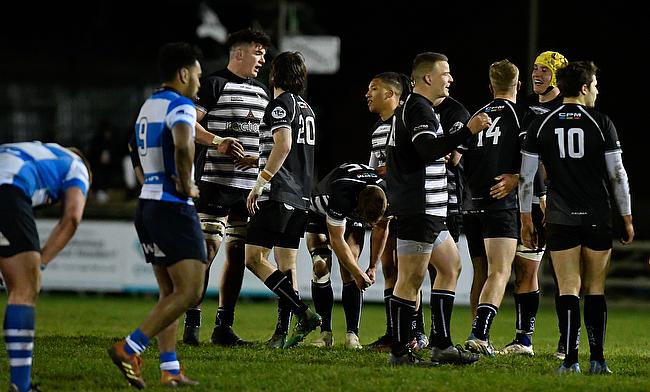 There was a time when Chinnor were looking over their shoulders rather than focusing on what was ahead.

“I retired from being a full-time professional in 2016 and stepped in as head coach at Chinnor,” says new Director of Rugby Richard Thorpe.

It was clear that at its heart, this is a community club and when we consider everything that has gone on with Covid-19 and things on and off the field at Chinnor in the past, we still have this unbelievable community of players and supporters.”

Four years ago, Thorpe joined the club in the midst of their transformation. In the latter stages of the 2015/16 season, Chinnor were able to produce a remarkable turnaround to survive relegation before slowly building their way up in National Two South.

Thorpe saw the Black and Whites narrowly miss out on a play-off spot in the 2016/17 campaign before he decided to take a break from the sport following a year and a half with Chinnor. In that time, former Director of Rugby Matt Williams was able to lead the club to a second-placed finish, which resulted in promotion.

The Oxfordshire outfit have now spent two seasons in National One and their upward trajectory has continued following a top four finish this term.

We chat to Thorpe on the telephone and Chinnor’s new boss mentions his office is now based at the club’s ground, Kingsey Road. As we talk, he is situated outside, enjoying the sunshine after launching himself into the next phase of his rugby career.

Following Williams’ recent move to London Scottish, Thorpe admits he had no intention of returning to rugby but when the vacancy came up in Thame, the former Leicester Tigers and London Irish man jumped at the chance to take over the reins at one of the most ambitious clubs in the National Leagues.

“When this opportunity presented itself, it wasn’t in my immediate plans to return to rugby quite yet,” says Thorpe. “I had stepped out of rugby. I’d managed my transition and I had built property development and performance coaching. However, this came along and it was the perfect opportunity.

“I was already considering moving to the local area together with my partner who I met at the bar at the club in 2016. I had heard my predecessor was going to join London Scottish so myself and Chinnor just began discussions.

“In a relatively short period of time, we were both able to get very comfortable that we could deliver something quite different at Chinnor and try to take this club to where it’s always had the potential to be.”

Thorpe isn’t shying away from the facts, either. This is his first job as a Director of Rugby and he joins a club which aims to challenge towards the top of National One.  “I don’t want to tiptoe around that fact. It will be a challenge, but I have outstanding people around me.”

The immediate support he has received from chairman Simon Vickers has also aided the transition into his new role.

Welcome back to the Club, Richard!

“From my perspective, let me make one thing very clear; without our chairman Simon Vickers, none of this [Chinnor’s rise] would have happened,” says Thorpe. “His support and his support for me has been invaluable.

“His vision for the club is aligned perfectly with mine which helps make sure that I am able to do the best job that I possibly can.”

Thorpe may well be taking his first steps into life as a Director of Rugby, but there seems to be no trepidation. “We are already doing things right now that no other team in National One will be doing and no other team in the Championship will be doing,” Thorpe says. “Luckily, I have got that support around me with some coaches with wise heads where we can actually look at these marginal gains that are used further up the chain at Premiership and international level so we can start to introduce them at this level.

“By the time we have our players back, we will have an environment that would surpass most clubs in National One or in Championship rugby, if we get it right.”

You can argue Thorpe’s own ambitious nature originates from his playing career. Representing Canada at the 2015 World Cup and being a part of a Premiership winning team with Leicester Tigers speaks for itself so his proactive approach to already shape a high-quality backroom team isn’t a surprise.

“Matt Mountford, who is now our team manager, has played a massive role at Chinnor for the several years that he has been here. He knows everybody and that’s very important because it is my vision now to reconnect the first XV who obviously play in National One and the entire club.

“We want to have clear line of sight from someone playing in the minis who can then see their pathway to playing National One rugby and maybe by the time they come through, it might be Championship or higher!

“Within our management team, we have included a Head of Strength and Conditioning. I have actually modelled this on typical Premiership management structures  who place this role in a very senior position. Players’ physical conditioning and their wellbeing comes first and foremost because ultimately, what is this all about? It is about our players.

Although @chinnorrfcthame is locked down, it has been great to get a face-to-face player management meeting done today (socially distanced of course!). Over the coming weeks we will begin to announce our new coaching team. Already our coaches have a combined experience of over 250 Premiership games, 15 international caps, including World Cup starts, plus Premiership, Championship and European Cup winners medals. And we aren’t even half way with our appointments yet! Our player recruitment is also very much underway… #oneclub #chinnorrfc #freshstart #playercentredcoaching #careers

Daz Oliver, the former RAF lock, will head up the strength and conditioning side of things whilst Thorpe has also appointed Bertie Hopkin as the new club captain.

Hopkin has been an integral part of Chinnor’s recent journey and in the season just gone, he lined up alongside the likes of Nick Selway, Carl Kirwan and Ofisa Treviranus who all joined the club last summer.

By July, Chinnor had recruited 22 new players, and whilst Thorpe revealed the club are looking to make additions during this off-season, the bigger and holistic picture is the number one priority.

“Right now, due to Covid-19, we have now got time to really think through what it is we want Chinnor Rugby Club to be,” says Thorpe.

“Right now, we have an excellent group of coaches and players who I cannot wait to start working with, however we are in the market. We are shopping around and looking at what’s available. I am receiving large lists from agents now with unseen numbers of players available.

“One thing that I have made very clear is that the best players on the field aren’t always the best people off the field and that is something we are going to be putting a lot of due diligence into. It is my aim to ensure that we get the right people here to deliver the culture that will ultimately fulfil our vision because it is our people who will deliver it at the end of the day. It is not about me as a Director of Rugby, it is about our players, supporters and our coaches. These are the people who will take us forward.”

Since their arrival in National One, forward is the only direction Chinnor have known. Following a midtable finish in their debut season, the Thame outfit ended this year’s curtailed campaign in fourth spot.

There is still uncertainly surrounding when Chinnor will be back in action due to the coronavirus pandemic, but underneath all the detailed work Thorpe has already implemented, the feeling of excitement like a child on Christmas Day is, admittedly, the overriding emotion for the club’s new Director of Rugby.

“I can sometimes struggle to keep that kid quiet because he is looking forward to the challenge and we just want to get going!  My role is very intense at the moment and it has taken up a lot of time. To call it a full-time job would be an understatement but I am loving every second of it and hopefully we get some real success out the back of it.”