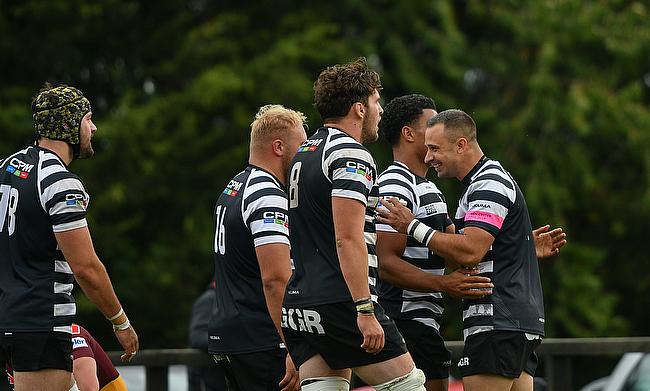 Chinnor scored four tries as they narrowly beat Cambridge to continue their superb start to life in National One.

Matt Williams’ side made it three straight victories at Volac Park and after promotion via the play-off last season, the Black and Whites currently find themselves top of the third tier.

Old Elthamians are the only other unbeaten side in National One as they produced another excellent display to see off a strong Darlington Mowden Park outfit at College Meadow.

Cinderford secured back to back wins with a thrilling victory over Sale FC while Ampthill & District, Caldy and Blackheath all returned to winning ways in Round Three.

Elsewhere, Rotherham Titans and Bishop’s Stortford are up and running for the campaign after clinching their maiden triumphs against Rosslyn Park and Birmingham Moseley.

Chinnor came from behind to edge past Cambridge as Matt Williams’ side moved to the summit of National One.

CAMBRIDGE 20 CHINNOR 22@ChinnorRugby continue to have fun in @national1_rugby with a hard fought but deserved win over @camrufc. An early look at the table sees The Villagers from Oxfordshire in their highest ever position.https://t.co/pysHx71vov#ProtectTheNest #FuninNat1 pic.twitter.com/0ve95n2U7O

The Oxfordshire outfit, who were promoted into the third tier in May, trailed by 13 points just before half-time, but Chinnor fought back thanks to tries from Dan George, Reon Joseph and Rob Bell.

Cambridge led 20-7 after an excellent first half following scores from Ziana Alexis and Kwaku Asiedu (2), but three tries in 10 minutes turned the game in Chinnor’s favour and they ultimately saw out the victory.

Old Elthamians continued their winning start to the season as they inflicted a first defeat on Darlington Mowden Park at College Meadow.

Ollie Claxon, Dom Lespierre and Ben Howard all crossed in the first period for OEs to give themselves a 24-12 lead, with a penalty try and a score via Oliver Walker being the response from the visitors.

A penalty from Warren Seals cut Old Elthamians’ lead soon after the restart, but the home side stayed in control when Tom White latched on to his own kick to score.

DMP did have the final say as Cameron Nordli-Kelemeti dotted down, but it was merely a consolation for the north-east outfit.

Ampthill and District returned to winning ways with a five-try victory over Esher.

Former Esher man Spencer Sutherland and Euan McKirdy scored first half tries for Ampthill, but the game was level at 10-10 at the break thanks to a Devin Montgomery try and five points via the boot of Owen Waters.

Waters was on target at the beginning of the second period to nudge Esher ahead, but Ampthill went back in front following Alexi Lutui’s converted try.

The visitors continued to battle and took the lead once again through a penalty try as Ampthill’s McKirdy joined Joe Bercis in the sin-bin to leave the hosts down to 13 men.

However, on their return, Ampthill produced a strong final 15 minutes as Berics and Sam Hanks both went over to clinch the victory.

Harry Hone scored two tries to help Cinderford seal back to back wins in a thrilling contest against Sale FC.

Both sides led in the first half, but Cinderford were ahead at the break with Reuben Norville, Aaron Ryan and Liam Hemming all dotting down.

@cinderfordrfc TAKE THE W!! Massive heart from the boys to come back again from points down! #cindydogs #cindy #rugby pic.twitter.com/WYbUkZrbuF

Gareth Rawlings, Andy Hughes and Aaron Reed crossed in the first half for Sale, who went 31-21 in front thanks to Reed’s second and a score from Jonty Rawcliffe.

But tries from Dale Lemon and Hone (2) gave the hosts a bonus-point win against their fellow newly promoted opposition.

Royle’s early brace was added to by Thomas Sanders as Caldy opened up a 19-point half-time lead.

Henry Wheadon touched down for the visitors on 44 minutes and was followed over by Jonathan Hughes, either side of Ben Jones’ penalty.

Josiah Dickinson and Will Attfield exchanged scores heading into the final 10 minutes, but Caldy made sure of the victory as Royle completed his hat-trick while Dickinson grabbed his second score.

Plymouth Albion suffered consecutive home defeats as they were narrowly beaten by Blackheath at Brickfields.

Matt Shepherd’s late try presented the chance for the hosts to snatch the victory right at the end of the game, but the conversion was missed meaning ‘Club’ clinched the win.

Thank you for hosting us @AlbionRFC – good luck for the rest of the season!

Blackheath were excellent in the second half, scoring tries through Danny Herriot and Jake Lloyd while Elliot Clements-Hill and Joe Tarrant kicked eight points between them.

Albion had led 12-3 at the break following scores from Dan Swain and Herbie Stupple, but the home side were unable to pinch the win at the death.

Rotherham Titans kickstarted their National One season thanks to a victory over Rosslyn Park.

Hugo Ellis scored a try after just two minutes to give the away side the lead, but a Henry Roberts try plus an inspired kicking performance from Alex Dolly gave the Titans a 11-7 half-time advantage.

Park began the second period on the front foot as they scored from close range through Arthur Ellis, but six penalties from the boot of Dolly steered Rotherham to their first victory since relegation from the Championship.

Bishop’s Stortford thrashed Birmingham Moseley to pick up their first win of the new season in emphatic style.

Rob Duff scored a brace as the rampant hosts ran in 10 tries, while Taraisai Wara claimed Moseley’s only score late on.

Nick Hankin, Charlie Kingham, James Apperley, George Cullen, Ben Creasy and Connor Austin all crossed for Stortford and after a winless start, this was the perfect response by Andy Long’s side.