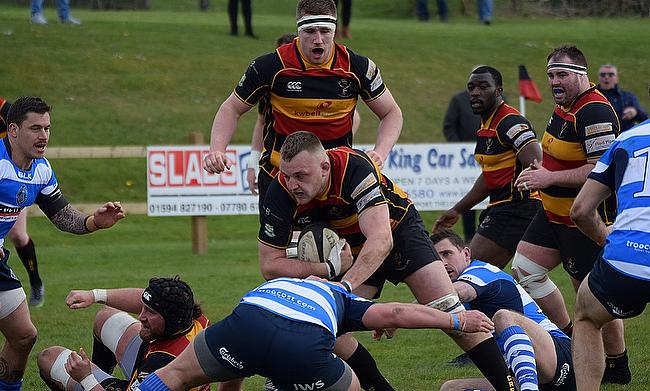 Cinderford are the only side in National One to have collected maximum points from the opening two rounds of the new campaign.Photo Credit: (Steve Manns)

Paul Morris’ side have picked up excellent wins over Sale FC and Plymouth Albion, but their unbeaten start to the season will be put to the test this weekend when they travel to Cambridge – who secured their first of the new term last Saturday.

Elsewhere, following their loss to the aforementioned Rams in Round Two, Birmingham Moseley will be after a response at Bishop’s Stortford as will Old Elthamians who travel to a winless Sale FC.

Meanwhile, Rotherham Titans make the trip to Plymouth Albion and Hull Ionians will be seeking their first points of the season away at Chinnor.

Similarly to last season, Cinderford have got off to a strong start. An impressive victory away at Sale FC on the opening day was followed by a dramatic win against Plymouth Albion in Round Two. Paul Morris’ side are now the only team in the division with maximum points and the Foresters will enter this weekend aiming for a hat-trick of triumphs.

Cambridge would have been disappointed to lose to newly promoted Rams in Round One, but Richie Williams’ side responded in an excellent manner by beating Bishop’s Stortford on the road. Back at Volac Park, the Blood and Sand will be searching for their first home victory of the new season on Saturday.

Rosslyn Park were involved in the 2018/19 title race until the final month of the season where a defeat against Ampthill and District realistically ended their promotion hopes. Kieran Power’s side would have keen to build on their excellent third-placed finish and Park have started this campaign extremely well.

Wins over Rotherham Titans and last year’s runners-up Old Elthamians means Park come into their Round Three clash with Canterbury full of confidence. The visitors are experiencing opposite fortunes to their hosts, however, the City Men can take positives from their two opening losses against Old Elthamains and Blackheath. The newly promoted side were narrowly beaten by Blackheath last week and this Saturday, they once again face another club who finished in the top four of National One last year. It certainly has been a baptism of fire for Andy Pratt’s side, but another spirited Canterbury display could yield their first ever victory at this level.

Following a frustrating summer, there will be renewed optimism around the Athletic Ground after two rounds in National One. Richmond have picked up back-to-back victories to begin the season against Darlington Mowden Park and Chinnor and now they face another test of their credentials when they travel to Blackheath.

Both clubs actually faced one another in pre-season and it was the hosts on Saturday who came out on top. The two sides meet at Well Hall once again and ‘Club’ come into the fixture having secured their first win of the campaign. James Shanahan’s side showed their quality to eventually see off Canterbury last week and Blackheath will now be aiming to build on that result by defeating their local rivals.

Rams have had the perfect start to life in National One. After clinching the National Two South crown back in April, Seb Reynolds’ side have adapted to the third tier brilliantly thanks to successive victories against Cambridge and Birmingham Moseley.

However, it is still early days and the Rams face another tough test against Darlington Mowden Park in Round Three. DMP’s narrow loss to Richmond on the opening day would have stung, but Danny Brown’s side retaliated in the best possible manner by cruising to a 52-5 victory over Hull Ionians last Saturday. Back at the Northern Echo Arena, the hosts will be keen to defeat another newly-promoted side this weekend.

After a scintillating victory against Hull Ionians to kick off the new season, Birmingham Moseley were unable to follow up their 70-16 win last weekend. The Midlands club were edged out by Rams RFC down in Berkshire so now Adam Balding and his side will want to produce a positive performance back on home turf this weekend.

Bishop’s Stortford are the visitors to Billesley Common in Round Three and like their hosts, they also fell to a defeat in Round Two after an impressive opening day win. Andy Long’s side were defeated by Cambridge at Silver Leys so they will be hoping their success on the round continues as both teams look to bounce back.

Old Elthamians’ Gavin Lach was very honest after his side’s defeat against Rosslyn Park in Round Two. The Director of Rugby stated OEs got exactly what they deserved as they were beaten on their own patch last weekend so the Mottingham club will be eager for a reaction when they travel to the North-West this Saturday.

The last thing Sale FC will want is an Old Elthamians outfit itching to return to winning ways as the hosts on Saturday are still searching for their first victory of the campaign. Defeats against Cinderford and Rotherham Titans leave Jonathan Keep’s side with just one point to their name thus far, but if Sale could get their season up and running this weekend, it would provide them with a much-needed boost.

It didn’t take long for Rotherham Titans to get off the mark this season. A loss to Rosslyn Park was firmly put behind them as last weekend, they produced a storming first-half display which helped the Yorkshire club beat Sale FC in Round Two.

This Saturday, Martin Jenkinson’s men make the long journey to Plymouth Albion and the home side are still waiting for their first victory. New head coach Ben Gulliver was only minutes away from securing his maiden win in charge of Albion, only for it to be snatched away by Cinderford last week. Plymouth have now begun the season with two narrow defeats which suggests they might not be far away from opening their account for this campaign. Will it occur at Brickfields on Saturday?

Chinnor’s opening two games of the new National One season have both been away from home, so Matt Williams’ side will be delighted to be back at Kingsey Road on Saturday. The Black and Whites come into Round Three seeking their second win of the campaign after beating Blackheath on the opening day and the hosts will start as clear favourites this weekend.

RUGBY: Director of Rugby Matt Williams admits that silly mistakes cost his @ChinnorRugby (black and white) side in the defeat against Richmond in National League One on Saturday.https://t.co/aRI5mwwOf9 pic.twitter.com/wCYKRpErup

Hull Ionians are the visitors to Oxfordshire and their return to the third tier has been extremely tough. In the opening two rounds, they have shipped 122 points and a trip to Chinnor is not exactly ideal when the I’s are looking for their first points of the season. Chinnor did only win five of their 15 home matches last season so that could provide confidence for the Yorkshire outfit as they seek their first victory of the campaign.