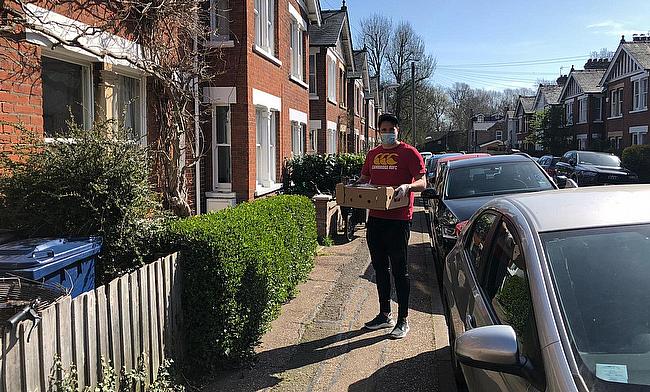 A week has passed since the RFU took the decision to end the 2019/20 season due to the impacts of Covid-19. (Photo Credit: Cambridge Rugby Club Community Team)

With the third and fourth divisions of English rugby cancelled until the start of next season, some of the NCA clubs are now switching their focus to helping those most in need amidst the current health crisis.

One such club is Cambridge. Their community team began a delivery and support service at the outset of self-isolation, which is still continuing to provide essential supplies for those most in need in the Cambridge area.

Ben Penfold, Head of Community at Cambridge RUFC and current first team player, is leading the operation and says that plenty of people have been in contact to register an interest in the service in its early days.

“Loads of people emailed,” Penfold said. “Not many wanted anything, but mainly saying; ‘we may need you in a couple of days’ so we are still waiting, but I am trying to put it out there a much as possible and if we can help in any way, then we are more than happy to. It is still early days, it went out to the members the other day, so I am sure we will get a few more people taking it up this week.”

Taking all appropriate measures, in line with Government guidelines, the community team have been taking groceries, picking up prescriptions and even walking dogs for those remaining indoors. Whilst the services were introduced to club members originally, Penfold says that he and his team are serving anyone who asks them.

“Anyone that is vulnerable, connected to the rugby club or not, we are just there to try and help follow all the health protocols,” Penfold said. “We are basically offering a delivery service to people that are self-isolating, not going out.

“We are just there to support them as much as we can, even if it is just popping out for a pint of milk at the local shop. We are happy to go out and do that, providing something different because of all the stress on all the other food delivery services. We know we are not them, but we may as well try and keep things quite local, try and help out where we can.”

Cambridge’s Community team has been a jewel in the club’s crown for some time. They have been to schools to offer coaching clinics and have added a BTEC college to the rugby club’s facilities on Grantchester Road to allow students to both further their education and be involved in a full-time rugby environment.

“As a club we pride ourselves on being a really good community rugby club and what we are seeing, certainly this week and last week, with the collaboration between certain areas of the club, the community team have really stepped up over the last week or so and are providing a number of initiatives to engage with the wider community,” added Head Coach Richie Williams.

“From my position as Head Coach, I am really proud to be involved in such a community club, such a forward-thinking rugby club. There are a number of initiatives that Ben Penfold has started and that has given us a reality check and has given us the opportunity to engage with the wider club.” 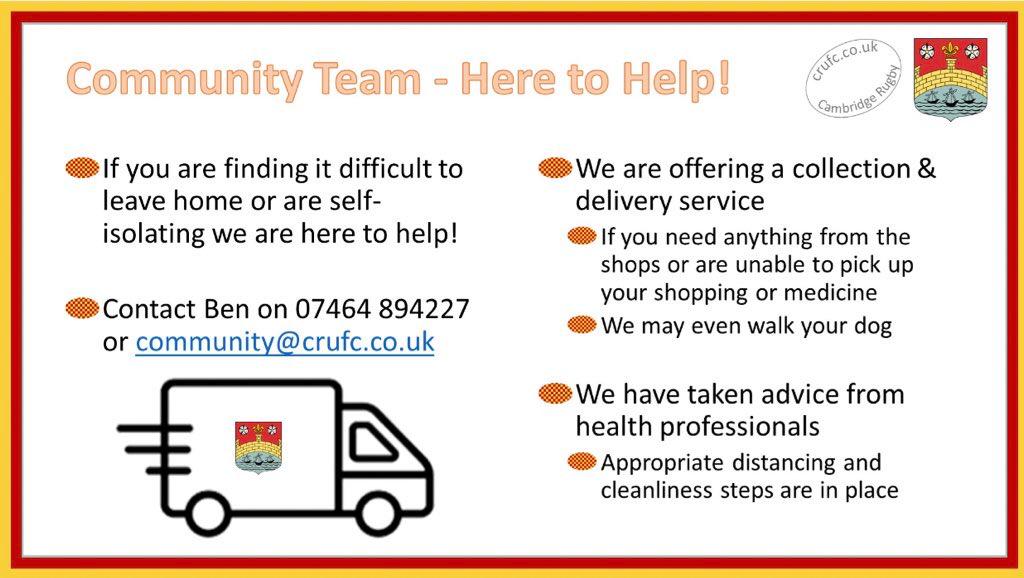 Not surprised by the community efforts, Williams says that it is the club’s culture that has prompted so many members to become involved with helping the local community, including Penfold and his teammates in the 1st XV squad.

“We have spoken and built a lot of culture about being good people away from rugby and what we are starting to see now is that a lot of the first team players have really offered themselves to the club to help in any sort of way,” Williams said. “That is really pleasing.

“We pride ourselves on being a really good community rugby club, being proactive, staying ahead of the curve by offering different services to the local community in Cambridge. The way I’m looking at things now, whatever we do over the next couple of months to help each other, then this tough experience is probably going to shape us as a team come September.”