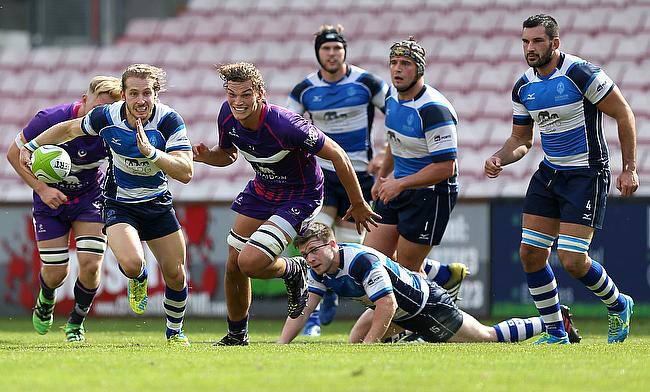 Albion looked to have done enough when John Kelly crossed, but DMP were not to be denied and snatched the win to move up to second in the league standings.

There was also a position swap underneath Darlington and Plymouth as Esher’s victory over Blackheath allowed Ampthill and District to move up to fourth in the division following their triumph away at Caldy.

While all the drama was happening below, league leaders Coventry were efficient as ever in their win against Cambridge and there were also excellent victories for Bishop’s Stortford and Old Elthamians.

Down at the wrong end of the table, Loughborough Students picked up only their second win of the campaign as they secured a crucial triumph over fellow strugglers Hull Ionians while Birmingham Moseley saw off the challenge of bottom club Fylde.

Coventry made it nine wins in a row as they outclassed Cambridge at Volac Park.

The league leaders were dominant at the set-piece and that allowed them to open up a 28-0 lead by half-time following scores from Scott Tolmie, Anthony Matoto, James Stokes and a penalty try.

Max Trimble and Phil Nilsen crossed in the second period to ultimately secure the win for Rowland Winter’s side, but Cov did have Sam Tuitupou sent-off for a punch with 17 minutes to go.

Cambridge had the final say on proceedings when Mike Ayrton scooted over, but they could do nothing about the table toppers who were once again unstoppable.

The outside centre dotted down right at the death and Brett Connon held his nerve to slot over the extras to give Danny Brown’s side a win which moves them up to second in National One.

Ollie Hodgson scored twice in three minutes to put give DMP in front, but the game swung back towards Plymouth as Eoghan Grace and John Kelly put the away side back ahead.

However, there was to be one final twist as DMP capitalised on a yellow card and Frankland squeezed over to make the scores level before Connon kept his cool to clinch the win.

Sam Baker and Josh Sharp both scored twice as Ampthill and District claimed a bonus-point win away to Caldy.

Winger Baker grabbed his brace inside the first 11 minutes while fly-half Sharp went over for both of his tries in the second period.

Kevin Barrett and Joe Berics scored the other tries for Mark Lavery’s men who responded well from their defeat to Cambridge.

Caldy’s Rhys Hayes crossed twice and JJ Dickinson also dotted down, but the hosts couldn’t quite stay close enough to threaten Ampthill in this encounter.

The Surrey-based side got off to a flying start and had a 17-14 lead at half-time thanks to Lloyd Davies and Ben Loader tries and a penalty from Paul Roberts.

Blackheath’s points came via Josh Davies and Tom Chapman, but Club could not take advantage of Esher’s ill-discipline and were punished when Tom James dived over.

On the hour, Markus Burcham kept the visitors very much in the contest, but two further penalties from Roberts was enough to guide Esher to a much needed win.

Bishop’s Stortford came from behind to secure their third successive win thanks to this narrow victory over Old Albanian.

Stortford were down 14-8 at half-time after tries from Dan Watt and Joe Bridger put OAs in control.

After opening the scoring through Nick Hankin, the home side stormed back into the game after the break as scores from Declan Caulfield and Seb Brownhill were enough to give Andy Long’s men the win.

A late penalty try earned Old Elthamians a hard-fought win over Rosslyn Park in a thrilling game at College Meadow.

The hosts raced into an early lead with Sam Egerton, Renford Bennett and Dom Lespierre all scoring, but Park held the advantage at the break thanks to tries from Hassel Collins, Harry Robinson and Rhys Crane.

After half-time, Joe Carlisle’s penalty was cancelled out by Robinson’s second score as the away side held a four point lead, but OEs hit back just after the hour as Lespierre doubled his tally.

The game was firmly in the balance with 10 minutes remaining, but OEs’ penalty try proved to be the decisive touchdown as Gavin Lach’s side continue their excellent start to the season.

Birmingham Moseley secured their fourth National One victory of the season in a closely-fought contest at Fylde.

Moseley’s Adam Caves (2) and Buster Lawrence crossed for tries in the first half, which also saw Tom Grimes and Harlan Corrie go over for the hosts.

Fylde went ahead after the break thanks to a penalty from Greg Smith and a score via Chris Briers, but a penalty try for the away side proved to be the difference, despite a late rally from the hosts.

Loughborough Students secured just their second win of the campaign thanks to a dazzling second half performance against Hull Ionians.

Centre Joe Allot scored a hat-trick in the first period for the I’s, who led 26-19 at the break with Sam Rees also crossing for the hosts.

Loughborough’s scores had come via Mosa Yussuf, Ollie Adams (2), Jack Stapley, but the side that had won just once in their last 12 league games before this clash, were about to put a halt to their disappointing form.

Hull extended their lead after the restart via an Issac Green penalty, but the hosts were then blown away

Stapley completed his hat-trick while Will Kaye, Alex Glashan and Kehinde Olowofela all went over to clinch a vital victory for Students.