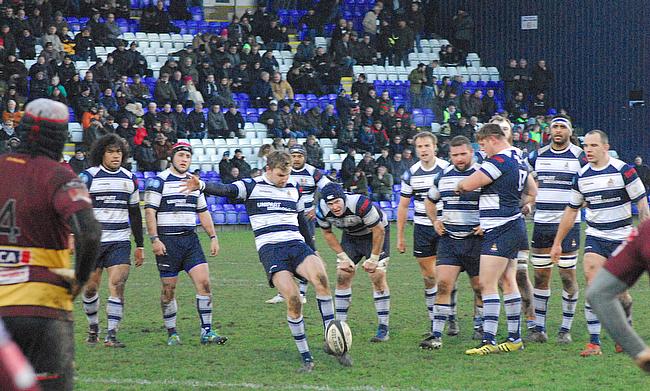 National One league leaders Coventry are firmly in control of the promotion race at the halfway point of the season and the Midlands club will be keen to continue their sensational form in 2018.

Cov have won all 15 of their matches this season and are 13 points clear at the summit of this division as we kick-off the New Year.

Second placed Darlington Mowden Park have Rowland Winter’s men just about in their sights and the northeast side will be hoping Old Albanian can do them a favour at Butts Park while are not in action as their game with Cambridge has been postponed due to a waterlogged pitch.

2017 will be a year which Coventry will look back on fondly. In total, the Midlands side played 29 matches and lost just three, with 15 of those victories coming in this current season. As we kick-off the New Year, Rowland Winter’s men sit 13 points clear at the top of National One and they are firmly in the driving seat for promotion to the Championship as things stand. Winter said this week that his team have exceeded his expectations and he will be hoping they continue to prove him wrong when they host Old Albanian this Saturday.

A look at the history of the Old Albanians fixture ?

15th so far this season but with wins against DMP and Ampthill, Coventry will need to be switched on after the Christmas break. ?⚪

Cov have won 21 of their last 22 matches at home so the task that awaits Old Albanian is difficult. The Hertfordshire side have had contrasting fortunes to their hosts as OAs currently sit 15th in the table and eight points adrift of safety as the second half of the season starts to click into gear. However, despite finding this campaign tough thus far, Gavin Hogg’s side can take some positives into this fixture. Earlier in the term, they narrowly lost 21-19 to Cov, but they have beaten Darlington Mowden Park and drawn to Ampthill & District so OAs are capable of gaining a result at Butts Park this weekend, but it will be a tall order.

Plymouth Albion will be hoping to commence the New Year with a victory when they welcome Bishop’s Stortford to Brickfields this Saturday. It is now over 12 months since Kieran Hallett took charge of Albion and it is safe to say they are heading in the right direction. A second placed finish last season and an unbeaten home record are certainly two plus points and the club have continued to progress this term.

Hallett’s side accommodate third in the table as things stand after 10 wins from their first 15 matches, but despite having not lost on their own patch since December 2016, their assignment this Saturday won’t be straightforward. Bishop Stortford are the visitors and it was an historic 2017 for Andy Long’s side. Promotion to National One was an outstanding achievement, but to end the calendar year sixth in the table and just six points behind Plymouth Albion is a remarkable feat. Stortford entered the Christmas period on the back of an excellent win against Old Elthamians, but now they will be keen to pick up their first away triumph since the start of November.

The New Year in National One begins with fourth placed taking on fifth as Ampthill and District host Blackheath in Round 17. The A’s would have been slightly disappointed with the way their December panned out as they picked up just one win from their four matches, including seeing a potential victory wiped out by Old Albanian just before Christmas. The men from Dillingham Park are still having a strong campaign in their third season at this level and victory over Blackheath would be the ideal start to 2018.

In terms of Blackheath, I think it is fair to say that their inconsistencies in their recent matches have hampered their progress up the division. ‘Club’ have won two, drawn one and lost two of their last five matches with their last fixture before the festive period ending 17-17 against Rosslyn Park. James Shanahan took over at Well Hall at the beginning of the campaign and Blackheath have made steps in the right direction since then and a win in Bedfordshire this Saturday could see them leapfrog Ampthill.

Having chatted to Old Elthamians winger and Dom Lespierre this week, I got the sense that the men from College Meadow just want to keep on improving. Despite a wonderful first half of the season in English rugby’s third tier – following promotion from National Two South in May 2017 – Lespierre said his side could be higher than seventh place in the division and they are ‘disappointed’ not to be.

However, National One’s leading try scorer did say that everyone at the club would have taken seventh place at the start of the campaign and OEs will now be aiming for another strong year, beginning with a home fixture against Fylde. The visitors are currently bottom of the division and they are 12 points from safety after just one win in their last five games. Warren Spragg’s men do have a tough start to 2018 as they take on four teams currently in the top half of the table so a positive result in Mottingham this Saturday could be vital to their survival chances.

It was certainly a December to forget for Birmingham Moseley. Following a run of five straight victories heading into the Christmas period, the Midlands side entered the festive break on the back of three consecutive defeats which would have frustrated Head Coach Richard Protherough after Moseley had made good progress following a mixed start to the season. As things stand, the men from Billesley Common sit ninth in the table as they continue building their way back to the second tier and they can get their current campaign back on track with an away triumph at Hull Ionians this weekend.

This Saturday we welcome @MoseleyRugbyFC to Brantingham Park for our first home game of 2018. It's a 2pm KO everyone welcome, please show your support pic.twitter.com/1RgxFqO9QE

The hosts occupy a spot in the relegation zone as things stand and despite a spirited display against Darlington Mowden Park to end 2017, the I’s dropped back into the bottom three. It is now just one win in four for the Yorkshire side, but they are only three points off safety and they are also back at Brantingham Park this weekend where all four of their victories have come this season. Can Hull Ionians’ bounce back and inflict another defeat on Birmingham Moseley?

The festive cheer would have been a high around Caldy in the lead up to Christmas. After clinching the National Two North title in April of last year, Simon Verbickas’ side have made steady progress in National One and back to back victories against Esher and Fylde would have been a massive boost for the Wirral side heading into 2018. Caldy find themselves 10th in the table and 10 points clear of the drop zone as things stand and they are back at home this Saturday, where they have been excellent over the last 16 months.

Four of Caldy’s six wins this season have come at Paton Field so a positive result for Loughborough Students this weekend will be a very good achievement for the Midlands outfit. Director of Rugby Alan Buzza said his side were developing ahead of steam as they entered 2018 and he will be hoping Loughborough can continue from where they left of at the end of last year. Despite a narrow loss to Cambridge just before Christmas, the Students have won five of their last eight games which has seen them move five points clear of the bottom three and victory on the Wirral this Saturday will maintain their positive recent form.

Rosslyn Park ended 2017 with a well-earned pat on the back. After a torrid run of results in the lead up to December, Kieran Power’s men recorded a victory over Birmingham Moseley and a hard fought draw away at Blackheath to move out of the relegation zone before the Christmas break. It has been a really tough season for Park, but now they must kick on in 2018 if they are to move away from the unfamiliar scenario of a relegation battle.

Happy New Year! We kick the year off on Saturday with a local derby as we host @esherrugby (3PM Kick off) pic.twitter.com/wjAv9WZFC8

The London-based side are just three points above the trapdoor as they prepare to welcome Esher to the Rock on Saturday. Esher take the short trip to Park on the back of four straight defeats and they are only four points clear of their hosts heading into Round 17. Esher have also lost all seven of their away fixtures this term so victory for either side this weekend would certainly be a morale booster.