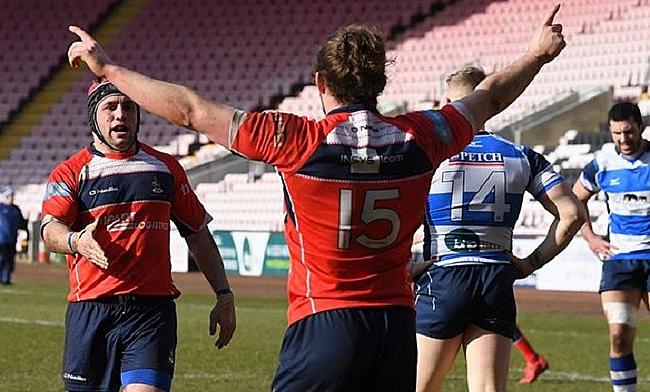 There was no shortage of drama in the first round of rearranged fixtures in the National Leagues as both National One and National Two North delivered some intriguing results.

In National One, league leaders Coventry produced a stunning display as they beat second placed Darlington Mowden Park to move closer to promotion.

Rowland Winter’s men are now 26 points clear at the summit after this victory and it looks as though they will be playing Championship rugby next season.

Elsewhere in National One, Hull Ionians sealed a dramatic win over Rosslyn Park to move out of the relegation places while Plymouth Albion are up to third and Caldy saw off the challenge of Cambridge.

In National Two North, Blaydon took another step towards safety as a clinical first half performance was enough for them to seal victory over South Leicester.

Back to back wins for Matt Thompson’s side leaves them level on points with 13th placed Wharfedale while fellow relegation rivals Sheffield fell to a defeat away at Macclesfield.

At the right end of the division, Tynedale have enhanced their chances of finishing in the top two after a wonderful fightback against Stourbridge. That result also meant Sale FC extended their lead at the top to five points while Sedgley Park are hot on the heels of the top two.

Tom Jubb and Max Trimble both scored twice as Coventry took a huge step towards promotion to the Championship after an impressive victory over second placed Darlington Mowden Park.

Jubb and James Stokes crossed for early scores for the league leaders at the Northern Echo Arena.

Showing our appreciation for Rowland Winter & the @CoventryRugby squad ???? pic.twitter.com/Zi0f6gIq3s

Will Maisey slotted over two penalties to give Cov a 20-0 lead at the break before Heath Stevens and Trimble got the ball rolling in the second period.

Trimble and Jubb added to their personal tallies later in the half as Coventry cruised to victory to move 26 points clear at the summit with seven games remaining.

Plymouth Albion are up to third in the National One table as two late tries from Tom Hendrickson helped them to victory against Birmingham Moseley.

The hosts did hold an 11-5 lead thanks to an Alistair Haining try and two penalties from the boot of Sam Hollingsworth.

Mark Harrison’s score extended Moseley’s advantage, but after opening the scoring through Sean Lonsdale, Albion finally added to their points total as Matt Shepherd slotted over a penalty.

Hendrickson went over after a sustained spell of pressure for Albion and with the clock ticking towards 80 minutes, the dual-registered Exeter Chiefs centre dotted down again to win it for the visitors.

The Wirral sides’ win means they are now level on points with eighth placed Bishop’s Stortford as Simon Verbickas’ men continue their impressive season in National One.

Two penalties from Ben Penfold had put the home side ahead at the break, but after creating several opportunities, Ross Stewart’s men were left to rue their missed chances.

A spirted Caldy side battled back as JJ Dickinson and Rhys Hayes both crossed while Ben Jones knocked over five points to seal the win for the away side.

Hull Ionians have moved out of the relegation zone in National One as Greg Lound kicked a late drop-goal to help his side secure victory over Rosslyn Park.

The I’s led for spells in this encounter, but a crucial win in their survival bid was sealed when Lound landed his drop-goal two minutes from time.

Rosslyn Park had led with tries from Nic Lovell, Henry Robinson, Arthur Ellis and Andrew Henderson, but a penalty try plus scores via James Sanderson and Lewis Minikin kept Hull in the hunt before a dramatic finish.

And Lound came off the bench to clinch the victory for the hosts who are now two points clear of the relegation places.

The second half began with Johnson nudging over his third penalty of the afternoon before Huddersfield got on the scoresheet through Adam Malthouse.

But, Sale kept their hosts at arm’s length as John Blanchard went over from close range to ultimately clinch a 15th win in a row for Jonathan Keep’s side.

Huddersfield also ended this encounter with 13 men as Ben Hoyle was shown a straight red card while Nick Sharpe was sinbinned.

Tynedale were able to sweep promotion rivals Stourbridge aside in the second half as the North East outfit triumphed to boost their chances of finishing in the top two this season.

Guy Pike went over for the opening try while Oli Walker and Jake Rodgers also touched down in the first period for Tynedale.

But, the hosts were trailing 29-17 at the break as scores from Robbie Forbes, Alec Hearle and Sam Pailor plus penalty try put Stour in control.

However, Tyne produced a superb display in the second half as they scored 35 unanswered points to clinch a stylish victory.

Louis Frankland, Richie Elliot and Nick Cairns all crossed at the start of the second-half to turn the game on its head before Pike sealed the win for Tyne with an interception try six minutes from time.

Sedgley Park are now three points off the top two after a comfortable triumph over Leicester Lions at Park Lane.

Sedge, who also have another game in hand, led 29-7 at half-time thanks to scores from Dan Maher, Bob Birtwell and Callum McShane as well as points from the boot of Matt Riley.

The hosts added their fifth try of the match after the break to seal a victory which keeps them firmly in the hunt for a promotion spot in this division.

Blaydon continued their resurgence as they convincingly beat South Leicester to move to the cusp of safety in National Two North.

A hat-trick from Jack Appleton plus tries from Dave Kilpatrick, James Cooney and Cameron Bell helped Blaydon lead 38-5 at half-time, with Cooney crossing the line for the home side after the break.

Myles Bean, Adam Johnson, Adam Shaw and Rickie Aley scored South’s tries, but the Midlands side could not recover after a tough first-half.

Sheffield are now seven points from safety in National Two North after Macclesfield kept their cool to clinch victory at Priory Park.

The Yorkshire side produced a solid first half display, but could manage only a Dan Rylance try and a Stephen Depledge penalty.

A brace from Myles Hall and a score from Dan Lomax gave Macc a 19-8 interval lead.

After the break, touchdowns by Chris Townsend and Charlie Reed sealed a sixth win in nine matches for Marshall Gadd’s side, while Sheffield only had a Fergus Wood try to show for the their efforts in the second period.