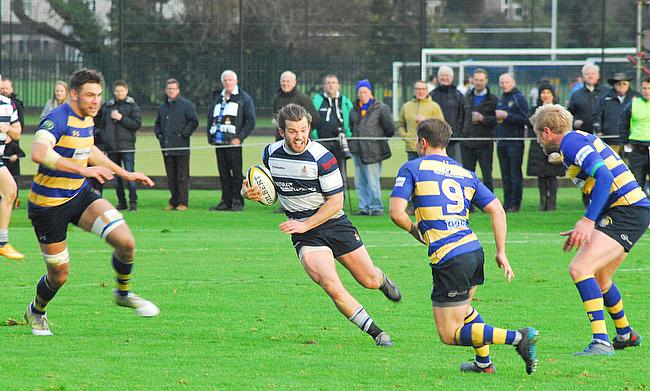 League leaders Coventry headed into the first break of the National One season with a narrow win over Old Elthamians at College Meadow.

The victory means Coventry have won all 11 of their games in this campaign and it leaves them nine points clear at top of the division ahead of their next fixture with third placed Plymouth Albion in two weeks’ time.

The aforementioned Albion edged out Ampthill and District in Round 11 and that allowed Darlington Mowden Park to jump back into the top two following their comprehensive win against Rosslyn Park.

Elsewhere in the top-half, Blackheath returned to winning ways while the good form of Bishop’s Stortford and Birmingham Moseley continued.

At the wrong end of the table, both Caldy and Loughborough Students clinched welcome victories against Hull Ionains and Old Albanian, respectively.

Coventry recorded their 11th successive victory of the National One campaign, but they were tested by Old Elthamians.

Cov had to defend resolutely in the final stages of this match at College Meadow, but the league leaders grinded out the win which leaves them nine points clear at the top.

The hosts once again showed their qualities against one of the top sides in the division and deservedly secured a bonus-point.

Quick-fire tries from Luke Narraway and Tom Kessell put Coventry ahead after George Messum had given OEs the lead in the first period.

The OEs responded after the interval as Joe Carlisle landed two penalties to put them in front, but a combination of solid defence and the boot of Will Maisey was enough for Cov to seal the win.

Chris Wood opened the scoring for DMP before Connon’s brace and a try from Ralph Appleby helped establish a 24-0 half-time lead.

Callum Mackenzie secured Darlington’s fifth try of the afternoon on 64 minutes before Rosslyn Park got on the board with a penalty try.

DMP’s Warren Seals scored late on to wrap up the win for Danny Brown’s men as they moved back into the top two.

Eleven points from the boot of Dan Mugford and a try via Matt Crosscombe consigned Ampthill and District to a defeat which saw them slip down to fourth in the table.

The A’s pushed Plymouth all the way, but a lack of a clinical edge proved to be their undoing.

Crosscombe went over for the game’s only try, finishing off a well worked move to put Albion 7-6 ahead at the break.

The visitors went back in front after the interval as James Pritchard landed his third penalty of the afternoon, but it was Mugford’s accuracy with the boot that clinched Plymouth’s first win in four matches.

Fly-half Joe Tarrant scored two tries as Blackheath bounced back from successive defeats with a hard-fought win against Fylde in a compelling encounter.

It was Blackheath’s first victory since the middle of October following back to back losses against Esher and Bishop’s Stortford.

Tarrant went over either side of the break, which saw Blackheath lead 26-12, and Tom Baldwin and Harry Bate also crossed for Club.

Tom Grimes and Tom Burtonwood had gone over for Fylde in the first period and Tom Carleton’s converted try made it 26-19, but Blackheath were able to see the game out.

Bishop’s Stortford secured their fifth win on the spin, but they had battle for their latest victory against Esher at Silver Leys.

Stortford led in the ninth minute thanks to Matt Riddington’s try and the hosts were able to extend their lead through the boot of George Cullen.

However, their advantage was cut to just three points before the break as Paul Roberts touched down.

Tom Banks’ score created a cushion for Stortford and the game was ultimately sealed when Ryan Hutler went over shortly after.

But, two close range tries from Esher set-up a tense finale, but Andy Long’s men held out to continue their impressive form.

Cambridge slipped to their third defeat in a row as eighth-placed Birmingham Moseley battled back to win at Volac Park.

Oli Petrides and Louis Rawlings grabbed tries in the first half as Cambridge led 10-3, with Moseley responding with a penalty.

However, the visitors were to dominate proceedings after the interval as James Dixon, Tim Molenaar and Adam Caves all crossed.

Moseley’s three scores had put the game out of Cambridge’s reach, despite Cameron Ruddock’s late try.

Caldy arrested a run of seven straight defeats as a commanding first half display was enough for the Wirral side to gain victory over Hull Ionians.

Caldy led throughout the first half thanks to tries from Nick Royle, John Jones and JJ Dickinson to leave them 22-5 ahead at the break.

Joe Allot had touched down for the Is in the opening period, but his side sparked into life after the restart.

James Sanderson and Lewis Wilson both crossed to cut Caldy’s lead to three points, but a Gavin Roberts try on 74 minutes pushed the hosts further in front.

However, Ben Stephenson’s late score set-up a nail-biting finish, but Hull Ionians couldn’t complete the comeback as Caldy held on for a welcome victory.

Loughborough Students secured a much needed victory against Old Albanian to move to within five points of safety in National One.