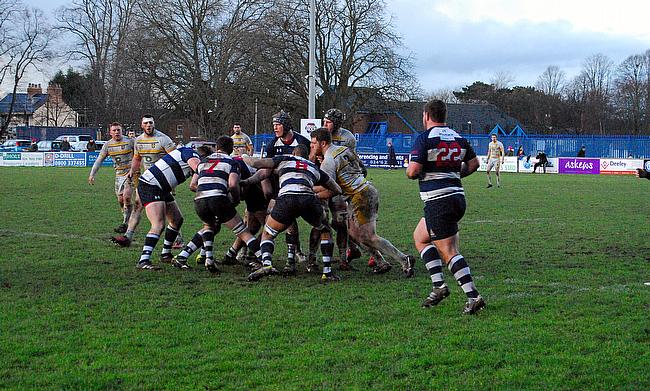 League leaders Coventry, now no longer unbeaten in National One this season, will be looking to bounce back in Round 19 when they host Esher at Butts Park Arena.

Last weekend, a loss at Well Hall against Blackheath ended Cov’s 16-match unbeaten run which now leaves them 14 points clear at the summit.

There is still a lot of work to do if anyone is to catch Rowland Winter’s side and their closest challengers are Darlington Mowden Park who travel to Caldy this weekend while third placed Plymouth Albion host Loughborough Students.

Meanwhile, Ampthill & District and Bishop’s Stortford lock horns in Bedfordshire, Blackheath go to Hull Ionians aiming to add to their win over Coventry and Old Elthamians entertain Cambridge. Elsewhere, Birmingham Moseley are at home to Old Albanian while Rosslyn Park take on Fylde.

League leaders Coventry will be looking for a positive response this week after their 100 per cent record this season came to a shuddering halt against Blackheath last Saturday. Their 61-29 defeat at ‘Club’ was their first loss of the campaign and Director of Rugby Rowland Winter has called upon his players to react in the right manner when they host Esher this Saturday. Cov are still 14 points clear at the top and a record which still remains intact is their imperious form at home since Winter’s arrival in 2016.

”It’s obviously disappointing, but hopefully we can turn it round and use it as a springboard, a lesson, and come back next week in a stronger position.” ?

The Midlands club have won 22 of their last 23 matches at Butts Park Arena with their last defeat coming against Hartpury 15 months ago so this will be a tough task for Esher this weekend. Added to this, the Surrey outfit travel to Coventry without a win in six matches and they haven’t won away all term. The side currently sitting in 12th place could well have secured back to back wins to begin 2018, but late points against them in games with Rosslyn Park and Ampthill and District have denied them of victories and now they will have to be at their very best when they face the table toppers in Round 19.

Is there still a chance for Darlington Mowden Park? Coventry’s defeat at Blackheath last weekend may have opened the door ever so slightly for Danny Brown’s side, but DMP know there is still a lot that needs to happen if they are to pull off a remarkable turnaround. Victory over Birmingham Moseley in Round 18 leaves the northeast outfit 14 points adrift of Cov, but with games in hand against Cambridge and the league leaders, a shot at promotion is still a possibility for the men from the Northern Echo Arena.

But, Darlington will be fully aware that they must continue to grind out the victories. Next on their agenda is Caldy and DMP travel to the Wirral currently on a six game unbeaten streak, but will know this won’t be any easy fixture. The hosts kicked of the New Year with a thumping win over Loughborough Students, but head into this weekend feeling fresh after their game with Cambridge was postponed last Saturday. It means Simon Verbickas’ men sit ninth in the table and they have won four of their last five games. At Paton Field, Caldy have picked up four straight victories and the current National Two North champions will be hoping to continue their fine form this weekend.

After not being involved straight after the Christmas break, third placed Plymouth Albion flew out of the blocks last weekend and produced a professional display to see off bottom of the table Fylde in Lancashire. It is now four straight wins for Kieran Hallet’s side and the Albion Head Coach described their last win as a “phenomenal effort” as they continue to put the pressure on second placed Darlington Mowden Park.

Plymouth are 17 points off Coventry  and Hallet was quick to say that the league leaders’ defeat last Saturday won’t make any difference in the short term and right around the corner for Albion is a home fixture with Loughborough Students. The Midlands club take the long trip to Brickfields having won just one of their last five matches which has seen Alan Buzza’s men slip back into the relegation picture. Following a positive end to 2017, the Students have failed to carry their momentum into the second half of the season and they are now just five points clear of the drop zone. This clash with Plymouth will be a tough test, especially as Albion have not lost at home since December 2016.

Last weekend, Ampthill and District left it late to snatch a share of the spoils against Esher to extend their unbeaten run to four matches, but Director of Rugby Mark Lavery was far from pleased with his side’s display. He stated it was ‘unacceptable’ to concede 19 unanswered points as the A’s ambitions to finish in second place took a minor hit. Lavery will no doubt be expecting a reaction from his players when Bishop’s Stortford head to Dillingham Park this Saturday.

Stortford took on Rosslyn Park in Round 18 having had an extra week off following their postponement against Plymouth Albion, but Director of Rugby Andy Long was quick to say that was no excuse for their 22-20 defeat at Silver Leys last week. It certainly wasn’t the perfect way to begin 2018 and with three of the current top five sides to come between now and the middle of February, a result at Ampthill in Round 19 would be an excellent achievement. Stortford have had a wonderful campaign so far after promotion from National Two South and the seventh placed side will be hoping their positive term can continue in the remaining four months of the season.

Followers of National League rugby and National One in particular, may well have been talking about Blackheath throughout this week. ‘Club’ certainly turned a few heads in Round 18 as they became the first side to beat league leaders Coventry, but they did so in style. James Shanahan’s men ran in 10 tries at Well Hall to secure their first victory in just over a month and the fifth placed side will be hoping that their victory against Cov can be a springboard for the rest of the season.

Keeps things interesting at the top of the table…@Blackheath_1858 pulled off an impressive performance to end @CoventryRugby's Nat 1 winning streak at 1⃣6⃣ matches ? pic.twitter.com/jpjhp7LAyh

Blackheath will know that their triumph over the table toppers will fade into the background if they fail to get a result against relegation threatened Hull Ionians this weekend. The I’s suffered a setback last Saturday as they lost to rivals Old Albanian, but the Yorkshire side remain five points from safety. They welcome Blackheath to Brantingham Park having won just one of their last seven games, but all four of their victories this term have come at home. Can Hull produce another home result to boost their survival chances?

A defeat against Bishop’s Stortford just before Christmas would have been a frustrating way to end an historic year for Old Elthamians, but Gavin Lach’s side have already started writing the latest chapter in their fantastic rise. Back to back victories in January have lifted the men from College Meadow up to sixth in the table and they only find themselves four points outside the top five. OEs have been keen to keep their feet grounded throughout their brilliant last 16 months and they will be focused on gaining their 11th win of the campaign when they entertain Cambridge.

It has been a highly unsatisfactory start to 2018 for Cambridge. Both of their fixtures against Caldy and Darlington Mowden Park have fallen foul to the weather so the Blood and Sand will be hoping its third time lucky when they head to Mottingham this weekend. Ross Stewart’s side ended last year in fine fettle winning four of their last five matches in what has been a strong season for the men from Volac Park following a campaign of flirting with relegation in 2016/17. Cambridge will now be keen to get the second half of the term up and running.

It was a tough afternoon for Birmingham Moseley last week. After beginning 2018 with a hard fought victory over Hull Ionians, they were second best against high-flying Darlington Mowden Park as they slipped to their fourth defeat from their last five games. The lack of consistency may well be bugging Richard Protherough, but Moseley are slowly building their way back to the second tier. The eighth placed side will be looking to have a strong second half of the season to enhance their long term vision, starting with this home fixture with Old Albanian.

While Moseley struggled last weekend, Old Albanian flourished. An outstanding 50-point win over rivals Hull Ionians was the shot in the arm Gavin Hogg’s side needed in the fight to avoid the drop. OAs are now six points off safety following their first win in 10 matches and with back to back fixtures against two of the current top five to come, the men from Woollams maybe targeting their trip to Billesley Common as a game where they can pick up points.

What a month is has been for Rosslyn Park. At the start of December, Kieran Power’s side were in the relegation places following just three wins from their first 13 matches of the season. Park were struggling, but they have now turned their fortunes around and welcome Fylde to the Rock currently unbeaten in four matches and 11 points clear of the drop.

It has been a wonderful response by Park and looking to follow in their footsteps may well be Fylde. Warren Spragg’s men fell to their 15th loss of the campaign last weekend as they were well beaten by Plymouth Albion and it leaves the Lancashire outfit 15 points adrift of safety with 12 games in the season remaining. Fylde have a lot of work to do and Spragg has called on his players to be ‘better with their discipline and intensity’ if they are to pull off an escape. Can Fylde claim a much needed result?