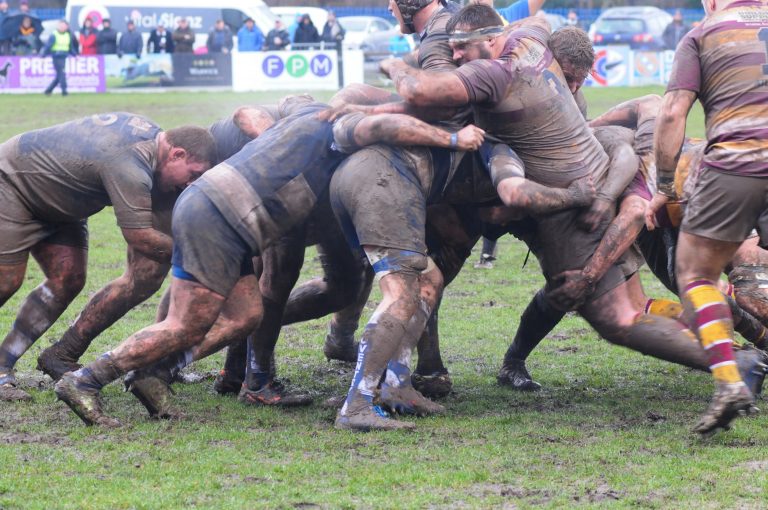 Coventry remain on course for promotion to the Championship following a victory over a resolute Fylde side in Round 21.

The league leaders, who are now 16 points clear at the top, raced away from Fylde in the second period to seal their 19th win of the campaign.

Once again, second placed Darlington Mowden Park got their job done as they beat Old Elthamians and there were also wins for Plymouth Albion, Blackheath and Bishop’s Stortford.

Coventry scored seven tries to beat bottom of the table Fylde and extend their lead to 16 points at the summit of National One.

The league leaders were awarded three penalty tries in this contest, the first coming on 18 minutes.

We battled past a spirited @fylderugby team, who for the first 60 minutes were in the fight. The penalty count took its toll and we capitalised with a whopping 33 points in the last quarter #nat1 #covrugby

And two more penalty tries either side of half-time as well scores from Phil Nilsen, Tom Emery, George Oram and Paddy Ryan secured the win for Cov.

Greg Smith slotted a penalty for Fylde, but after a positive display in the first period, Warren Spragg’s side could not maintain their level of performance in the second 40.

Danny Brown’s side are now 16 points off runaway leaders Coventry, but DMP continue to grind out the results.

This was a battling performance from Darlington who claimed their seventh successive win thanks to scores from Alfie Barron, Brett Connon and Chris Wood at College Meadow.

Ampthill and District let a 17-point lead slip as Loughborough Students fought back for a draw in a thrilling National One encounter in Bedfordshire.

The home team led 17-0 at half-time thanks to tries from Karim Lynch, Joe Berics and Sam Baker.

But Loughborough hit back with Oskar Hirskyji-Douglas’ try converted by Owen Waters, whose 69th minute penalty moved the Students to within seven points of their hosts.

And Andrew Boyce’s converted score squared things as the Midlands club deservedly grabbed a share of the spoils to edge them further away from the relegation places.

Plymouth Albion sealed their first home victory of 2018 by consigning Caldy to a defeat at Brickfields.

After Caldy had taken a 10-point lead, tries from Sam Daly and Harvey Skinner put Albion 14-13 up at the break.

A try via Delwyn Jones and eight points from the boot of Ben Jones meant Caldy were very much alive in this contest, but a second half score from Dan Pullinger ultimately sealed the game for Plymouth.

Ben Jones did slot a third penalty of the afternoon late on to secure a losing bonus point for Caldy, but it was the hosts that clinched the win.

Blackheath swept aside Old Albanian with a controlled performance on James Shanahan’s return to Woollams.

The ‘Club’ head coach saw his side eventually take the game away from the OAs following tries from Alex Pickersgill, Jake Lloyd, Joe Tarrant, Tom Stradwick and Harry Bate.

Old Albanian, who are now 15 points from safety in National One, could only manage two penalties from Tom Bednall.

Bishop’s Stortford beat Hull Ionians at Brantingham Park to clinch their first victory of 2018 in National One.

Rory Banks and Nick Hankin snapped up tries inside the opening half for Stortford, but they were only one point ahead at the break as Steve Slingsby and Sam Wilson dotted down for the I’s.

However, the hosts failed to add to their tally after the break and George Cullen, who landed a penalty in the first half, kicked six points in the second period to clinch the win for Andy’s Long side.

A late Esher penalty ended a run of nine straight defeats on the road as the Surrey side claimed a draw at Birmingham Moseley.

The result leaves Moseley still in the mid-table positions, while Esher are now 11 points clear of the relegation places.

Never would have expected that result. Brilliant from the EEEs to fight back for a draw! ????? https://t.co/Fy1kcZlkWD

The hosts did lead 12-9 in this contest thanks to a brace from Ciaran Moore, with three penalties for Esher keeping them in touch with Moseley.

Both teams then exchanged tries, with Andrew Fluker going over for the home side, before the game was level as Esher landed their fourth penalty of the day.

Moseley then thought they had won this encounter with a penalty of their own, but Esher fought back to snatch a draw.

Rosslyn Park bounced back from their loss against Loughborough Students to secure their fourth home victory in a row as they beat Cambridge.

Centre Albert Portsmouth got the opening try as Cambridge made a strong start to the game in London.

But, Park were able to cut the lead to four points through a Harry Leonard penalty.

And the defining moment in the match came in the second period when Adam Frampton rumbled over from a maul to score the hosts’ try and ultimately seal the victory.