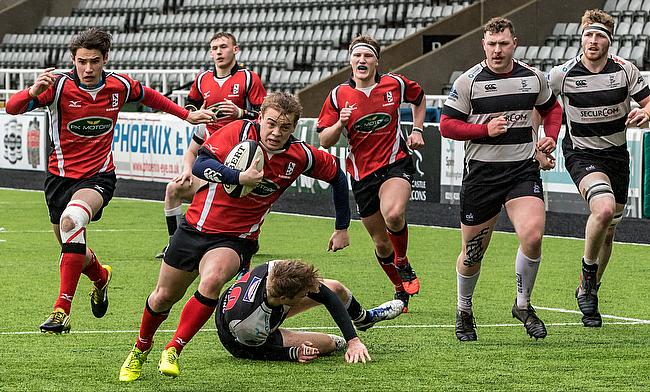 The National Leagues have served up drama this season and the results over the Easter weekend have set up an exciting end to the campaign across all three divisions.

In National One, Cambridge took a giant leap towards safety as they beat Hull Ionians to distance themselves from the drop while Esher’s narrow defeat away at second placed Darlington Mowden Park means the Surrey-based side are not out of the woods just yet.

Elsewhere in the third tier, Ampthill and District returned to the top three with a win in appalling conditions against Old Elthamians and Bishop’s Stortford also battled against the elements to defeat Blackheath on Good Friday.

Blaydon boosted their survival chances in National Two North as they produced a stunning performance to see off Luctonians. A six-try victory lifted them out of the relegation places while rivals Wharfedale dropped into the bottom three after losing to Sedgley Park at home.

Sedge did go to the summit of the division having played their Easter fixture last Thursday, but Sale FC responded on Saturday to move back into top spot following an excellent win over Macclesfield. Meanwhile, Chester thumped Leicester Lions and Otley picked up a vital win against South Leicester.

Also, there was just one fixture in National Two South and Gary Kingdom was the hero as Taunton Titans left it late to seal a victory over Henley Hawks.

The score was 15-13 at half-time, courtesy of tries from Talite Vaioleti and Ben Frankland, but Esher had held a 10-point lead following two penalties from Basil Strang and a score via Niall Saunders.

When Strang landed his third penalty of the afternoon with five minutes to go, it looked as though Esher were going to leave the north with the points.

But, Law held his nerve to keep Mowden Park on course for a top two finish.

Ampthill and District secured their fourth win on the trot as they beat Old Elthamians at College Meadow in atrocious conditions.

The A’s produced a solid defensive effort after the break as the home side were unable to turn their territory into points.

Ampthill ultimately clinched the win when Billy Johnson went over from close range just after the hour.

Bishop’s Stortford’s ambition of finishing in the top half of National One this season was given a major boost as they beat Blackheath.

In poor weather conditions, both sides entered the break on level terms as Harry Bate’s try was cancelled out by a Declan Caulfield score.

George Cullen edged his side in front with a penalty after the restart before Seb Brownhill crashed over on 65 minutes.

Cullen added the extras as Andy Long’s side sealed their first home win of 2018.

Cambridge moved 15 points clear of the relegation places as they ground out a crucial victory over Hull Ionians at Volac Park.

The hosts, who had picked up a vital win over Old Albanian in their last fixture, led 17-0 at the break following tries from Louis Rawlings and Tom Emery, plus a penalty from Ben Penfold.

What a difference a game makes….. pic.twitter.com/t9z6HCksw1

Mike Ayrton got touchdown number three for the Blood and Sand after the interval, before Hull Ionians sparked a mini-revival.

Sale FC moved another step closer to automatic promotion to National One following a commanding victory over Macclesfield.

The league leaders were 11-0 ahead at half-time following a Gareth Rawlings try and two Chris Johnson penalties at Priory Park.

Jonathan Keep’s side continued to dominate after the break as Dan Birch, Jonty Rawcliffe and a brace from Jack Moorhouse completed a clinical second half display from Sale who remain two points clear.

Sedgley Park briefly went to the top of National Two North on Thursday night as they battled to victory against Wharfedale.

Jamie Harrison, Matt Riley and Hallam Chapman all crossed to give Sedgley Park a slender lead at half-time, with Kieran Frost and a sensational score from Tom Barrett being the response from Dale.

Barrett landed a penalty shortly after the interval to cut Sedge’s lead to four points, but Riley’s second kept Matt Bebbington’s side ahead.

Dale continued to battle as Josh Prell dotted down, but a Steve Collins drop-goal clinched a hard-fought triumph for Sedge who remain on course for a top two spot.

The men from Hare Lane have won 11 of their 13 fixtures on their own turf this season and their latest victory was secured due to a dominant second half display.

The result sees Chester keep the pressure on sixth placed Huddersfield as we enter the final month of the campaign.

Andy Baston (2), Macc Van Sertima, George Baxter, Andrew Oakden (2) all crossed for the hosts while Devon Constant went over for the Lions.

A tight first half produced 10 points with Tom O’Donnell crossing for a converted score while Corrie Venus slotted a pen for South.

Otley upped the tempo after half-time and were immediately rewarded as Paul Petchy crossed on 52 minutes before a penalty try and an effort from Jack Mackie clinched an important win for Peter Clegg’s men.

Blaydon moved out of the bottom three following an emphatic victory over relegation rivals Luctonians at Kingston Park.

Tries from Matt Charlton, Jack Appleton (2) and Matt Thompson helped the hosts to a 20-0 half-time lead and further scores by Joe Whyman and Harry Borthwick made it comfortable for Blaydon.

The result means the Crows are now two points clear of the drop while Luctonians are now 10 points from safety with two games in hand.

The Hawks were hoping to secure their first home win since the end of January, but for the second year on the trot, Kingdom came to Taunton’s rescue.

Henley led this contest 17-7 with Connor Hayhow grabbing a brace while Ben Oliphant-Thompson touched down for Taunton.

Great win away from home in tough conditions, unbelievable shift from the boys, topped off with @kingdomg15 knocking over a pen with the last kick of the game #Titans #Roadtrip #TitansOnTheRoad #StillRaining #Issac’s pic.twitter.com/ofsbnnMYjF

The visitors crucially hit back before the break through Oliphant-Thompson’s second try to cut the Hawks’ lead to three points.

Kingdom levelled the scores 10 minutes into the second half and he kept his cool once again as the clock hit red to slot over a penalty to snatch the win for Tony Yapp’s side.