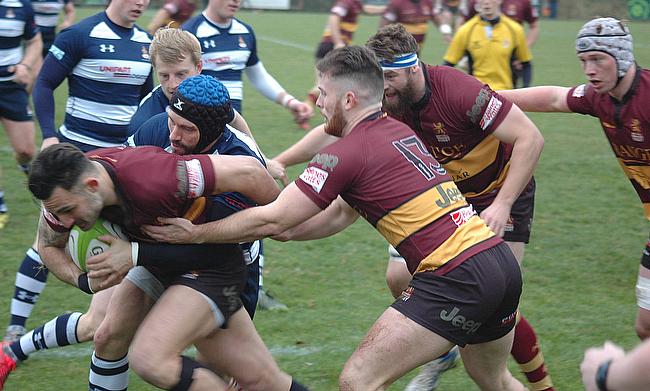 Darlington Mowden Park and Ampthill & District will be aiming for victory this weekend as second takes on third in Round 13.

DMP and Ampthill are currently in the shadows of league leaders Coventry who hold an 11-point advantage over the rest of the field as we begin the final month of the year. Both Darlington and the A’s know that defeat would seriously harm any promotion ambitions they may have.

While two of the top three clash in the northeast, Cov travel to the opposite end of the country to take on Rosslyn Park as they look to continue their remarkable season so far while elsewhere in the division, Plymouth Albion host a rejuvenated Hull Ionians, Blackheath go to Cambridge, Bishop’s Stortford travel to Fylde and Birmingham Moseley take the trip to Old Elthamians.

Meanwhile in the bottom half of the table, an in-form Loughborough Students side welcome Esher to the Midlands and Caldy face Old Albanian with both teams in need of a win.

It was labelled as their toughest test of the season so far, but last week, Coventry passed their examination against Plymouth Albion with flying colours. Rowland Winter described his side’s win over Albion as efficient as the Midlands club pocketed their 12th successive win of the season and their 20th league victory in a row. The men from Butts Park are now 11 points clear at the summit and they travel south this weekend to take on Rosslyn Park.

The task facing the hosts is a daunting one, but Kieran Power’s men would have taken positives from their defeat at Ampthill and District last Saturday. Park were very much in the game throughout and they will need to perform in a similar way in Round 13 if they stand any chance of inflicting a first defeat on Coventry. Rosslyn Park are without a win in four matches and they are also just two points clear of the bottom three.

Coventry will be focused on getting their job done at the Rock this Saturday, but they will have one eye on proceedings at the Northern Echo Arena as second take on third when Darlington Mowden Park entertain Ampthill & District. It was another frustrating away day for Danny Brown’s side last time out as a comfortable lead was wiped out by Bishop’s Stortford meaning the northeast outfit had to settle for a draw.

? Match Preview ? 2nd host 3rd on Saturday as we welcome Ampthill to the Northern Echo Arena as part of yet another double header! #MowdenFamily #ComeOnParkhttps://t.co/S8UVHvZUGs

That result leaves DMP 11 points adrift of Coventry and this weekend would be the worst possible time for their 100 per cent home record to come an end. Darlington sit two points clear of an Ampthill side that have won three of their last five games. Paul Turner’s men will know anything other than a victory would seriously damage any promotion ambitions they may have so a fourth triumph on the road is a necessity for the A’s.

It has been a tough few weeks for Plymouth Albion. Since the middle of October, Albion have really gone off the boil and just one win in their last five matches is their worst run of form under Kieran Hallett since he took over at Brickfields 11 months ago. All of this means Plymouth are now fourth in the table and 16 points behind Coventry with any possible promotion hopes fading as each week passes by.

However, Albion certainly have the quality to turn things around and they host Hull Ionians this weekend aiming to get their season back on track. In total, it is just under a 700-mile round trip for the visitors on Saturday, but they will take the long journey in high spirits. The I’s are currently 11th in the table and five points clear of the relegation places following four successive home wins. Hull are yet to taste victory on their travels this season, but with Plymouth Albion struggling for form, the I’s could sneak a result on the south coast.

Blackheath will want to put the last month behind them. Three defeats from their last four matches leaves ‘Club’ 18 points behind league leaders Coventry and now the immediate focus for James Shanahan’s side has to be reigniting their season. Following an excellent start of seven wins from their first eight games, the men from Well Hall seemed capable of throwing their hat into the ring for a possible promotion push, but any hopes seemed to have distinguished.

Now, they will want to kick December off with a victory when they visit Volac Park this weekend. Shanahan has strong connections with Cambridge and he takes his side to the Blood and Sand desperate for a victory. Following a convincing win over Old Albanian last week, the hosts ended a run of three straight defeats which leaves Ross Stewart’s men in the top half of the table and eight points clear of the relegation places. Can Cambridge continue their solid season this weekend?

Bishop’s Stortford are certainly enjoying themselves in National One this season. Following a title winning campaign in National Two South, Andy Long’s side have not looked back and they enter the final month of the year in fine fettle. Stortford are unbeaten in their last six matches and currently occupy sixth in the table. Their impressive record was under threat last weekend at home to Darlington Mowden Park, but a remarkable fightback in the final 20 minutes earnt them a draw.

#Fylde RFC delighted to announce that @spraggio's appointment as Head Coach has been extended to cover 2018-19 season. https://t.co/nSENmooemm pic.twitter.com/aaAdnoBLIc

With all this in mind, the Hertfordshire club are heavy favourites this Saturday when they travel to bottom of the table Fylde. After an excellent win away at Old Albanian at the start of last month, Warren Spragg’s side have suffered back to back losses with the latest being a humbling defeat to Esher in Round 12. The Lancashire club are 12 points from safety as things stand, but if they were to get nothing from this fixture at Woodlands, alarm bells could start to ring for one of National One’s stalwarts.

While some teams have struggled over the last month, one side that flourished in November were Birmingham Moseley. Richard Protherough’s men are currently third in the form table having won their last four matches and we are slowly starting to see the Moseley of last season. The men from Billesley Common are rebuilding under Protherough and his side currently sit seventh in the table as they prepare to take the trip to Old Elthamians.

If you’d have asked the coaching staff at Old Elthamians at the start of the season whether they would take ninth place heading into the Christmas period, I think it would have been a resounding ‘yes’. Gavin Lach’s side have adapted really well to life in National One following their play-off victory back in May, but OEs will be keen to end a mini-blip in form this weekend. The men from College Meadow have lost their last three games – which is their worst run of the campaign – but they are very capable of halting that sequence of results, in front of their own supporters.

It was once again another home triumph for Esher last weekend. The Surrey-based side are slowly making Moseley Road a fortress and victory in Round 12 against Fylde took their tally to 14 wins from their last 22 games on their own turf. Now, the task for Esher is to turn that positive home form into performances on the road because in contrast, they have won just four of their last 22 matches on their travels.

Esher do visit the Midlands having lost just once since the middle of October, but they face a Loughborough Students side which is staging a revival. The men from Epinal Way have won three of their last four fixtures which now leaves them just two points adrift of safety and a battling performance against Blackheath last time out emphasises the quality the Students have amongst their ranks. Will a victory this weekend lift Loughborough out of the bottom three?

Two sides currently in a relegation fight meet on the Wirral in Round 13 as Caldy entertain Old Albanian. The hosts are just one place and two points above the bottom three as things stand after just one win in their last nine matches. Having said this, the National Two North champions have improved in recent weeks as victory over Hull Ionians was so nearly followed up by an away win against Birmingham Moseley so there are certainly positives to take into this weekend for Simon Verbickas’ men.

As for Old Albanian, they head into this weekend five points adrift of safety as they occupy 15th place in the division. The transition from James Shanahan to Gavin Hogg has been tough for the OAs, but they have a real opportunity this Saturday to boost their chances of digging themselves out of trouble when they take on another side also struggling for form.