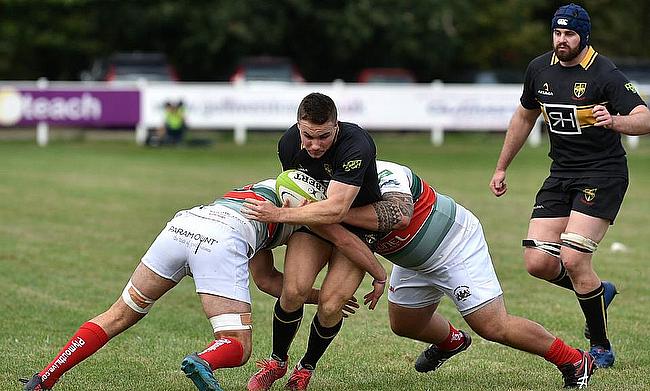 Esher and Birmingham Moseley could take a vital step in the right direction on Saturday as the sides meet in Round 12 of National One.

Moseley head to Surrey this weekend three points off safety, but a victory would see them move out of trouble as we enter December. Rivals Bishop’s Stortford travel to Chinnor on Saturday while bottom of the table Loughborough Students visit league leaders Blackheath.

The race for promotion will continue to intensify this weekend as Old Elthamians, who are level on points with the aforementioned Blackheath, take the trip to Cambridge while third placed Chinnor host Sale FC, Caldy meet Rotherham Titans on the Wirral and Ampthill & District entertain Darlington Mowden Park.

Also in National One, Rosslyn Park face Plymouth Albion with both sides aiming to return to winning ways for contrasting reasons.

A draw which may have felt like a defeat. That could have been the overriding feeling for Blackheath after seeing a 15-point lead slip away from them against Cinderford last weekend. ‘Club’ were on course for a sixth straight win, but they were denied at Dockham Road. Nevertheless, James Shanahan’s side remain on top of the pile and they can further cement their position at the summit when they host Loughborough Students this Saturday.

Blackheath have not tasted defeat for just under two months and they will be favourites to continue their unbeaten run against bottom of the table Loughborough in Round 12. However, the Midlands club have certainly improved over the last few weeks. 14 points from their last five games has completely reignited their season and Alan Buzza’s side are now within touching distance of safety. The Students have really turned their campaign around and a victory over the league leaders would conclude a superb month.

Old Elthamians are still level on points at the top of National One and they may have had a wry smile on their face after their draw with Ampthill and District in Round 11. While they had to settle for a share of the spoils, rivals Blackheath also drew with Cinderford as the leading pair in this division continue to match one another.

Here’s what @RichieWills10 had to say about @camrufc stalwart @Mike_ayrton as he prepares to make his 200th appearance for the club tomorrow https://t.co/fUqHUB9Kne

The bigger picture for OEs is that they are still right at the heart of this title race, but they visit a Cambridge side on Saturday who are more than happy to put dents in promotion ambitions. Richie Williams’ side defeated Ampthill and District earlier in the season and last week, the Blood and Sand toppled Rotherham Titans so they will be keen to take another scalp on Saturday. Cambridge come into this fixture on the back of successive wins and a victory at Volac Park would be the first time they have won three games on the bounce since December 2017.

If you want to get your money’s worth this season, buy a ticket to watch Chinnor every Saturday. Matt Williams’ side continue to be involved in games which contain high drama and last weekend was no different. The Black and Whites fought back to stun Birmingham Moseley in Round 11 and secure a victory which lifted them to third place in the league standings.

Chinnor are now two points off the top following an unbeaten run of four matches and they will be hoping to extend that record when Sale FC visit Kingsey Road on Saturday. The Manchester-based club would have been delighted to return to winning ways last weekend, but they were made to work hard for their victory against Loughborough Students. Jonathan Keep’s side are now sitting comfortably in 11th place, but if they were to triumph on the road in Round 12, it could lift them into what is becoming an intriguing top half of the table.

Two possible promotion candidates collide at Paton Fields this weekend as fourth place Caldy entertain Rothertham Titans, who currently occupy eighth spot in the division. After back to back defeats, the hosts on Saturday would have been delighted to halt their mini-blip in form after securing a victory over Bishop’s Stortford in Round 11. Simon Verbickas’ side find themselves just three points off the summit and a win over Rotherham would certainly enhance their promotion credentials.

In terms of Rotherham’s own title push, it has suffered a setback in November. Back to back losses against Ampthill & District and Cambridge means they are now six points behind the leaders, but after putting together a strong run of results across October, Joe Barker’s men will be fully aware that a victory on Saturday would get their promotion challenge up and running once again.

Ampthill and District came away from second placed Old Elthamians after a stalemate in Round 11, but the Bedfordshire outfit are still firmly in the promotion mix despite dropping points at College Meadow. The A’s occupy fifth place as things stand and they are unbeaten in four matches as they prepare to host Darlington Mowden Park.

Whilst Ampthill have top spot in their sights, Darlington have slowly worked their way back into this enthralling promotion race. Despite their inconsistencies this term, Danny Brown’s men are only six points behind Blackheath and back to back victories over Esher and Plymouth Albion could well have kicked started DMP’s campaign. The North-East outfit finished second last season and a win at Ampthill this weekend would launch them back into the title picture.

Last Saturday, Rosslyn Park did lose a small amount of ground in the race for top spot, but their loss to Esher in Round 11 would still have been massively frustrating. Kieran Power’s side had not suffered a defeat at home prior to last weekend, but their 100 per cent record came to an end at the Rock.

Park are now sixth in the table and four points behind Blackheath as things stand and they will be keen for a reaction when they take the trip to Plymouth Albion in Round 12. Last season, travelling to Brickfields would have been a daunting task for any side, but Kieran Hallett’s men have really struggled for consistency this term. A late defeat to Darlington Mowden Park means Albion head into the final weekend of November in 12th place and just five points clear of danger. Plymouth are also without a victory in three matches so a home win would be very welcome on Saturday.

Character and desire were on display in Cinderford last weekend as Paul Morris’ side came back from 22-7 down to claim a draw against league leaders Blackheath. The Foresters produced a strong second half performance to secure a share of the spoils in Gloucestershire and the result kept Cinderford five points off top spot as we enter Round 12.

The men from Dockham Road, who were promoted into this division back in April, are enjoying themselves on their return to National One, but Bishop’s Stortford are experiencing contrasting fortunes. Last Saturday, Andy Long’s men slipped into the bottom three following their fifth defeat in a row and after such a such positive campaign in 2017/18, Stortford are yet to click into gear this year. Can a victory against Cinderford provide a catalyst as we head into the festive period?

Esher and Birmingham Moseley meet in Surrey this weekend with both sides currently at the wrong end of the table. The hosts sit just two points clear of the trapdoor, but Ricky Nebbett’s men will be pleased heading into this Saturday because their superb victory away at promotion chasing Rosslyn Park in Round 11 allowed Esher to move out of the bottom three.

Here is your Esher 1st team to face @MoseleyRugbyFC. Kick off tomorrow at 3pm. Come down & support the lads. We need another win. @EnglandRugby V @qantaswallabies will be on in the bar & @Springboks V @WelshRugbyUnion after at 17h20. pic.twitter.com/iiaUSDckkr

The men from Molesey Road ended a three-game losing streak last week and they will now be aiming to build on that excellent win when they face Birmingham Moseley. The Midlands club currently sit three points adrift of safety after two very frustrating results for Richard Protherough’s side. A loss to rivals Loughborough Students was followed up by a narrow defeat against Chinnor, but now Moseley have a great opportunity to kickstart their season by beating one of their rivals. They have won just two of their 11 matches so far and a third win of the campaign would see them move out of the relegation places.