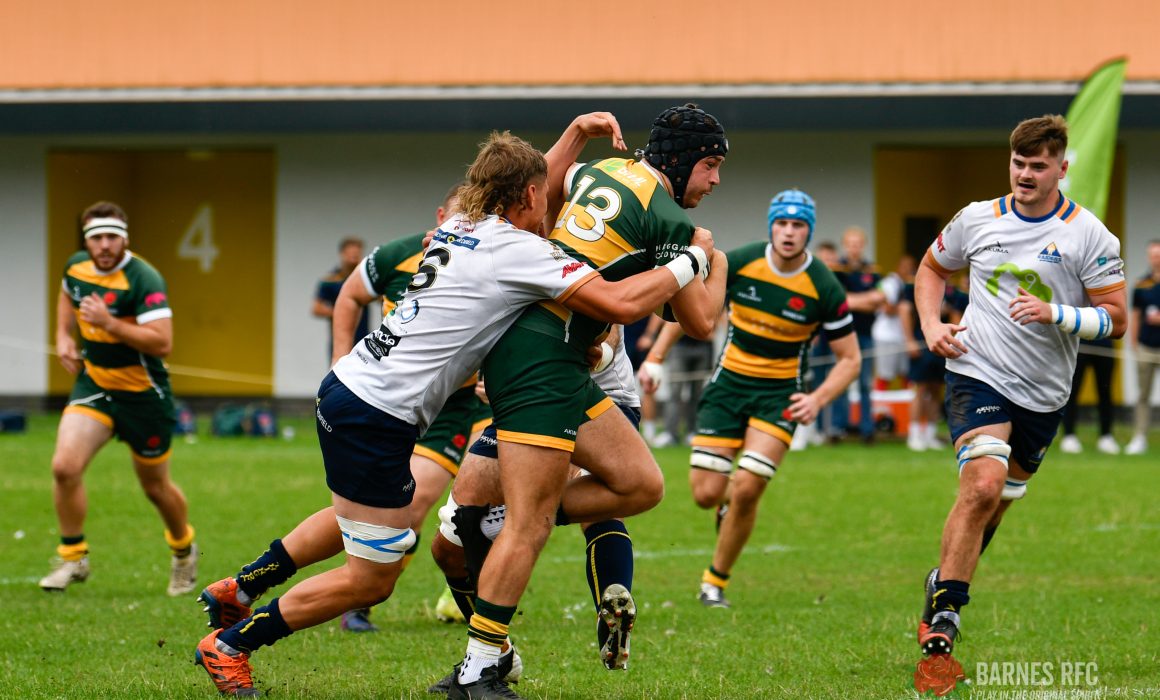 Round Two was a clear demonstration of what National League Rugby is all about with bagfuls of tries and some thrilling comebacks. (Photo Credit: Jonathan Knight)

The Yorkshire outfit matched Josh Brown’s early try when Jacob Mounsey sprinted over after 11 minutes, but the hosts took the game away from Leeds Tykes before the break.

Sam Adu, Joe Carpenter and Oskar Hirskyji-Douglas all scored and Sale hammered home their advantage in the second period as Sam Dugdale, Adu, Ollie Longmore and Callum Morris all touched down. Fly-half James Robins added eight successful conversions over the course of the afternoon to put the gloss on a 56-8 success.

Max Hayman and Jak Rossiter both helped themselves to two tries apiece as Rams RFC backed up their opening day victory with a 46-30 triumph over rivals Chinnor.

Scores from Ant Marris, James McRae, Hayman and James Baker gave Seb Reynolds’ charges a 24-16 lead at the interval before Rossiter dotted down his first to keep the away side in the ascendency.

Chinnor – who had crossed through Mark Darlington in the first half – were able to cut the deficit to nine points thanks to Reece Marshall’s effort and the excellent kicking of Tom Price, but second scores from Rossiter and Hayman, either side of Dean Hammond’s try, was enough for the win.

National One’s Player of the Week for Round One, Craig Holland, was on hand to rescue Rosslyn Park as two late penalties from his boot helped them secure a 32-27 away win against a competitive Esher outfit whilst Anthony Maka was the hero for Cambridge as his try sealed a 36-30 victory against Bishop’s Stortford in an entertaining contest at Silver Leys.

Elsewhere, Darlington Mowden Park clinched back-to-back triumphs to begin the season as they defeated Hull 29-22, Alex Ducker’s hat-trick helped Plymouth Albion to a 33-26 win over Taunton Titans, and Cinderford got off the mark for 2022-23 with a 37-25 success against Birmingham Moseley.

Wharfedale’s solid start to the National Two North campaign continued in Round Two as they beat Harrogate 24-7 in this all-Yorkshire affair.

The Greens exploded out of the blocks with Sam Gaudie and Ben Wright going over inside the first nine minutes, but it was first blood to the hosts after the break as Will Hall dotted down.

However, that Harrogate score caused Wharfedale to react as Josh Prell scooted over before the visitors rubber-stamped their second bonus-point success on the spin with a penalty try 11 minutes from time.

Fylde also continued their 100 per cent record as they got the better of near neighbours Preston Grasshoppers (22-6) at Lightfoot Green.

After defeating Chester on matchday one, Fylde started this Lancashire derby strongly as Ben Gregory powered over after just six minutes.

Ben Pearson replied with two penalties to nudge the Hoppers ahead, but the away side delivered a one-two punch on the stroke of half-time as Tom Grimes and Matt Sturgess both crossed.

Adam Lanigan touched down on 50 minutes as Fylde threatened to pull clear, but in the end the visitors were unable to add to their tally.

Toby Ferguson’s stunning try set up Tynedale’s 30-26 victory over Blaydon at Crow Trees in what was a real tug-of-war in the North East while Andy Riley and Stephen Collins saved Sedgley Park as 10 points in the final nine minutes saw them snatch a 20-19 victory away from Chester.

The boot of Lewis Minikin guided Hull Ionians to their first win of the new term as they beat Rotherham Titans 27-22 in a tense clash, Sheffield took full advantage of Louis Townsend’s red-card to secure a 34-15 derby day triumph over near neighbours Sheffield Tigers and Joe Rowntree’s late penalty clinched a narrow 25-22 victory for Otley against Huddersfield.

Barnes kept the winning feeling going in Round Two as they defeated Guernsey Raiders 32-17 at Footes Lane despite having Courtney Raymond sent off 11 minutes from the end.

The flanker was shown a second yellow card, but the visitors were able to navigate their way to victory.

Josh Davies (2) and Cameron Roberts went over in the opening 40 to hand Barnes a 19-3 lead, but a score from Dan Morgan was the tonic the Raiders needed before the break.

The Guernsey hooker went over again on 53 minutes to make it a two-point game but successive penalties from Patrick McDuell gave the Londoners a cushion. Raymond’s dismissal may have added to any Barnes nerves but they were ultimately settled when Davies completed his hat-trick to wrap up the win.

Sonny Gay’s try on 46 minutes was one of the highlights in a pulsating contest at The Rugby Park but despite Westcliff’s best efforts, the home side did enough to see out the victory.

A try and 10 points from the boot of Greg Bannister helped the away side lead 20-17 at half-time, with Maciu Nagboi and Ewan Richmond crossing for Rochford Hundred.

Westcliff winger Finlay Doyle did score with three minutes remaining to set up a grandstand finish in Essex, but there was to be no dramatic fightback.

Mike Stanway was the star of the show as Bury St Edmunds ran in six tries in a 36-27 win over North Walsham and Henley Hawks produced a dominant display to see off Old Albanian 41-17 at Woollams. Elsewhere, four unanswered second half tries saw Tonbridge Juddians recover from 18 points down to defeat Kent rivals Canterbury 44-35 while a brace from Will Scholes helped newly-promoted Dorking to a 44-24 triumph over Worthing Raiders.

Sevenoaks v Blackheath was postponed because the pitch was unfit to play on.

Dings Crusaders earned some derby day delight at Shaftesbury Park thanks to a 43-24 bonus-point win over Clifton.

The latter scored his second try shortly after the break but Dings’ Lawrence followed suit to restore the Crusaders’ 16-point lead.

Danny Openshaw scored almost immediately to bring the visitors right back into the contest but a converted try and a penalty from Dings No.10 Tom Wilstead packaged up the victory for the home side.

From Bristol to the Midlands where Leicester Lions stretched their unbeaten run to 12 games following a 26-15 success away at Hinckley.

This sequence of results for the Lions goes back to last season, and Gareth Collins’ side were able to seal their latest win either side of half-time.

Hinckley did rally late on through David Peck and Shae Nixon but it wasn’t enough to halt the Lions’ momentum.

Exeter University’s eye-catching start to life in National Two West went up a notch in Round Two as they ran in six tries to defeat Redruth at Topsham while Loughborough Students opened their account for 2022-23 by racking up a half century of points in a 54-25 win against Stourbridge.

Elsewhere, Luctonians were also in a ruthless mood as they brushed aside Old Redcliffians in a 44-15 victory, Newport (Salop) secured their maiden win in National League Rugby after defeating Bournville 35-28 and the boot of Jacob Murphy snatched a 23-22 success for Barnstaple against Hornets after a thrilling contest in Weston-super-Mare.