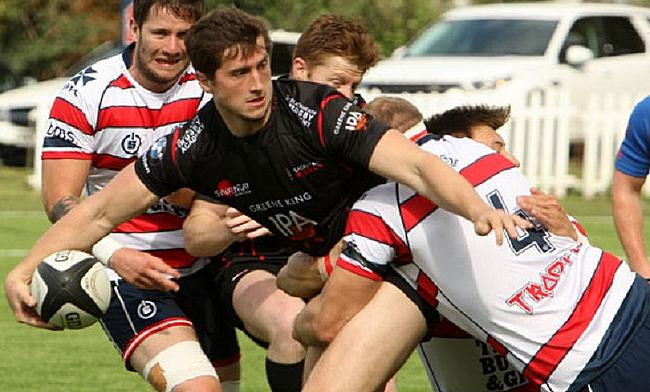 Blackheath secured their fifth consecutive victory in National One to move to the summit of the division following a thumping win over Sale FC.

Once again, we have new leaders in this division and ‘Club’ will head into the first break of the season on top of the pile with second placed Old Elthamians level on points with James Shanahan’s side after their victory over Plymouth Albion.

Rosslyn Park are up to third after snatching a late draw against Chinnor while Ampthill and District strengthened their promotion ambitions with a comfortable win over Rotherham Titans.

Down at the bottom, Loughborough Students and Cambridge both picked up excellent wins against Birmingham Moseley and Bishop’s Stortford, respectively.

Elsewhere, Cinderford and Darlington Mowden produced superb comebacks as both claimed victories in Round 10.

Blackheath are the new leaders in National One as they ran in seven tries to beat Sale FC at Well Hall.

Chris Johnson kicked a penalty for Sale FC and also converted scores from Ryan Parkinson and Andy Hughes to keep the visitors alive in the contest.

But after Freddie Owen had added Blackheath’s fifth try, Lloyd and Neale Patrick crossed to seal the victory for the hosts, while Tom Ailes’ late effort was merely a consolation for Sale.

Old Elthamians are level on points with table toppers Blackheath after an excellent victory away at Plymouth Albion.

OEs had begun the day at the summit of National One, but Blackheath now lead the way by virtue of ‘Games Won.’

Max Wilkins’ try for OEs cancelled out Dean Squire’s early score for the hosts at Brickfields.

Dan Swain finished off a driving maul for Plymouth, but Dom Lespierre’s try on 33 minutes helped the away side into a 14-10 lead.

Rhys Morgan extended OEs advantage to nine points as he dotted down shortly after the interval and despite Swain immediately responding for Albion, the visitors were resilient in defence and clung on for the win.

Chinnor and Rosslyn Park had to settle for a share of the spoils at Kingsey Road as their enthralling National One contest ended in a draw.

The hosts recovered from a slow start to lead 33-21 thanks to tries from Will Bordill, Craig Holland and Ben Thomas, with Holland also kicking 15 points.

Park’s Nev Edwards crossed in the final play of the game to level the scores, but the away side missed the conversion attempt.

The visitors’ other scores came via Mike MacFarlane, Greg Lound and Adam Frampton.

Rotherham Titans’ five match winning streak came to an end in Round 10 as Ampthill and District secured an excellent victory to move up to fourth in the National One standings.

Sam Baker’s well taken try put the hosts on their way to a third consecutive win ahead of the first break in the season.

Jamie Cooke scored a try immediately after half-time for the visitors, but scores via Euan McKirdy and Josh Sharp settled matters in Bedfordshire as Ampthill’s recent good form continued.

Cinderford secured their third win from their last four matches as they produced a remarkable fight back to beat Caldy.

Royle’s second score seemed to put the game to bed, but Sam Smith went over to kick start the comeback as Cinderford trailed 31-5 at half-time.

George Porter began the scoring in the second period for the Foresters and unanswered tries from Nathan Taylor, Tom Heard, Harry Hone and George Boulton completed a quite stunning comeback from Paul Morris’s side.

Darlington Mowden Park ended a tough first-third of the campaign with a victory as they came from behind to beat Esher in a riveting contest.

Graham Logan’s try at the beginning of the second half put Esher 24-3 in front after scores from Max Coyle and Cameron Gentles in the first period.

However, DMP were able to overturn the 21-point deficit as Joe Craggs and Brandon Asher-Wood both scored before the visitors were awarded a penalty try.

And with two minutes to go, Warren Seals snatched the win for the North East outfit as he landed a late penalty.

An 80th-minute penalty from Lawrence Rayner saw Cambridge come from behind to snatch a dramatic win over Bishop’s Stortford at Volac Park.

A Kwaku Asideu try helped Cambridge to an 8-5 lead, but Leo Castiglione’s converted score put the visitors ahead.

However, the Blood and Sand hit back with tries from Sam Yawayawa and Jake McCloud to give themselves an eight-point advantage.

Trailing 20-12, a penalty from Manu Vunipola and a score from Sam Winter looked to have won it for Stortford, but there was to be one final twist as Rayner held his nerve to slot a winning kick for the home side.

Loughborough Students have moved to within five points of safety in National One after beating rivals Birmingham Moseley.

Loughborough found themselves behind at the end of the first half as tries from Ben Christie and Mark Dixon were cancelled out by Mike Penn and James Williams, with the later also kicking 10 points.

Two scores before the hour put Loughborough 28-20 up as Victor Keunen and Dixon both scooted over.

Suvwe Obano’s try on 69 minutes ultimately wrapped up the game for the hosts while Laurence Cowen scored a consolation try for Moseley, who remain in the bottom three.