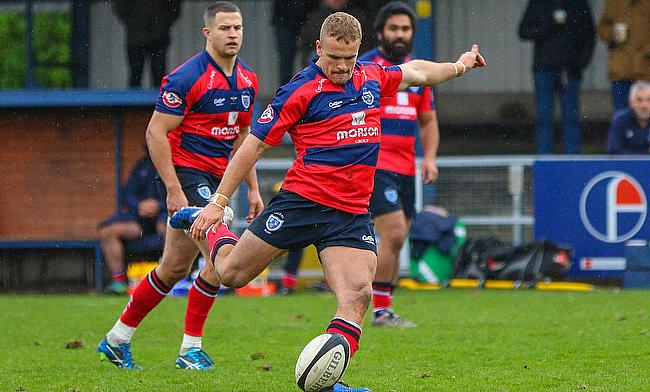 After two years spent as a professional with Worcester and Sale, James Williams is adjusting to working life once more. Photo Credit: Gareth Lyons

One of a number of Sharks senior academy players released ahead of the proposed Premiership restart in August, Williams had been learning from some of the very best in his two years as a professional. At Worcester, it was the likes of Duncan Weir and Wynand Olivier, whilst at Sale, he was able to gain knowledge from players such as Rob du Preez and AJ MacGinty.

“Off the top of my head, at Sale, we had Faf (de Klerk), the Curry lads, Simon Hammersley, Rob du Preez, AJ MacGinty, all these international lads that go really hard at it every day,” Williams said. “I think, for a developing young lad, being around those boys, seeing how mentally up they were just for training, which I know sounds a bit strange, was such a benefit.

“Last time I was at Hartpury and Moseley, rugby for me has always been a hobby, so I would just go and enjoy training. It has changed slightly in that respect, obviously I am still loving it, but switching on another 20, 30 per cent to try and make everything a game situation, train as hard as you can and I think that does transfer massively into a Saturday, Sunday night.”

Having made appearances in several different competitions for Sharks this season, Williams was hoping to stay with the Manchester club, but despite playing a part in the side’s last two appearances in the Champions Cup, he is now looking to prove himself once more with Hartpury.

“There were conversations about a two-year deal and then a few things hadn’t helped that,” Williams said. “It was probably only four, five weeks into lockdown that, out of the blue, it came that there was no deal at Sale. So, there was a few weeks of panicking. I didn’t have things jumping out at me because everyone was tucked away, trying to save as much money as they could.

THANK YOU 🦈 | Sale Sharks can today announce that @james_will24 will leave the club on the 1st July upon the completion of his contract.

The club would like to thank James and wish him every success for the future.#ThanksJames #SharksFamily pic.twitter.com/nehpBWkYIn

“Luckily, I got back in touch with Mark ‘Cornwall’ Pasty, telling him about what was going on and we came to a deal within 48 hours. I didn’t ever think about leaving Sale to be honest, but with the current situation it all happened rather quickly. I am still very motivated to get back to a Premiership club. I still feel like I’ve got a bit of unfinished business if I’m honest. It all finished rather abruptly.

“Being straight up and being honest, I’m good enough. This year, I proved I was good enough to have opportunities and it just got cut short. I am a very competitive person and I want to get the most out of my rugby. I think it would be a shame if I didn’t get that opportunity. Hopefully, if I just work as hard as I can in the mornings and evenings, some doors may open in the future.”

Hartpury are preparing for their fourth season in the Championship, having been promoted in 2016/17. Placing 10th on two occasions in the second tier of English club rugby, they already operate in a way in which several Championship sides are adjusting to this off-season.

London Scottish and Nottingham will be part-time next year, meaning that only half of the division will be professional when the 2020/21 season begins. Williams is already aware of the changes this will have on the competition, but is of the mindset that squads will be stronger as a result of the funding cuts.

“Squads will be a lot stronger because they have boys like myself having to drop down or older boys having enough because they have been cut or whatever,” Williams said. “I think it will be good for English rugby, it is just a shame that for whatever reason it is now being supported as much as I think it should be, because you have seen Northampton’s and Bedford’s link they have made.

“Being in those lads positions last year, going out on loan to a Championship club, they develop so quickly because it is a good level of rugby and you have got some old, wise, experienced heads in that league that will teach some young lads lessons. It should be a good year for the Champ, hopefully we create some noise and people start supporting Champ rugby alongside the Prem.”