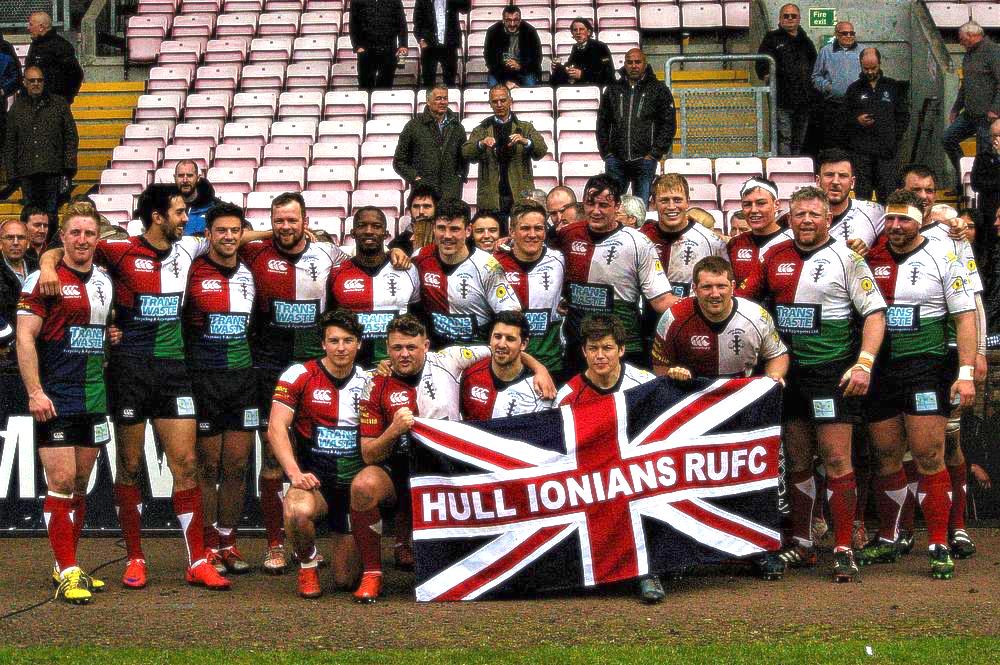 Hull Ionians secured their safety in National One after a bonus-point victory over Darlington Mowden Park.

After three successive victories in April, the I’s required a win of any kind to avoid relegation and Alex Crockett’s men came from behind to secure the vital victory which keeps them in this division for a third consecutive year.

This result for Hull Ionians meant Blaydon’s efforts were in vain against Old Albanian on Saturday. The north-east side were relying on a slip-up by the Yorkshire club to stand any chance of beating the drop, but a narrow defeat for Mickey Ward’s men sealed their fate.

At the right end of the table, Hartpury College created history as they completed the campaign unbeaten. This remarkable achievement saw John Barnes’ side drop just two points all season as the newly crowned champions clinched 30 straight wins on their way to securing promotion to the Championship.

Elsewhere on the final day of the season, Plymouth Albion, Coventry and Esher continued their fine form while Ampthill & District battled to victory against Rosslyn Park and Birmingham Moseley waltzed to a win over Fylde.

Hull Ionians survived relegation from National One with a bonus-point win over Darlington Mowden Park in the north-east.

The I’s knew they needed to a win to secure their status at this level for another year and they made it four straight victories to keep their place in National One.

A try from Edward Falkingham plus eight points from the boot of Isaac Green came before the break, but Hull were trailing 19-13 at half-time after James Barnard, Shaun McCartney and Simon Uzokwe had all touched down for DMP.

Away hooker Ally Forth crossed after the interval to put Ionians ahead and when Uzokwe was yellow-carded the visitors took full advantage as Issac Green grabbed a brace.

Aquile Smith was then sin-binned for the I’s with 10 minutes remaining and Uzwoke capitalised on the extra man to dot down, but a try from Andy Humberstone two minutes from time wrapped up the crucial win for Hull Ionians.

Despite a valiant performance, Blaydon have been relegated from National One following a narrow defeat against Old Albanian.

Jason Smithson’s converted try gave the visitors the lead, but the OA’s were ahead by half-time thanks to scores from England U20 international Max Malins as well as Jason Lombard.

A Malins penalty helped the OAs move into a 10-point lead, but Blaydon clawed their way back into the game when Jack Davidson went over in the corner.

The hosts then stretched their lead with a penalty try but the game was level when Dan Marshall sprinted over.

However, straight from kick-off, Lunnon glided through the Blaydon defence to snatch the win for James Shanahan’s side and confirm Blaydon’s relegation.

Hartpury College have become the first ever side to complete a National One season undefeated as they beat Blackheath to secure their 30th straight win of the campaign.

Jonas Mikalcius scored a hat-trick as the National One champions ended a sensational season by creating history.

Hartpury raced into a 19-3 lead thanks to Mikalcius’ three scores, only for Blackheath to hit back with two tries of their own through Tom Baldwin and Chris Walker.

Luke Eves’ try was sandwiched in between Blackheath’s effort as he secured the 28th bonus-point of the season for College and John Barnes’ men extended their lead after the restart as Harry Cochrane and Maliq Holden darted over.

Cochrane capitalised on a yellow-card shown to Markus Burcham as he grabbed his second score of the day with five minutes remaining, but ‘Club’ had the final say as Mike Mvelase dived over.

Plymouth Albion recorded a comfortable win over Cambridge at Volac Park to end the campaign on a 13-match winning streak.

Tries from Harry Strong and Herbie Stupple edged Albion ahead at the break after an excellent first period by Cambridge who had scored through Albert Portsmouth.

However, Plymouth were rampant after the restart.

Dan Powell went over after just three minutes before Dan Williams stretched their advantage to 18 points.

Stefan Liebenberg gave Cambridge a glimmer of hope as he dotted down, but with just over 10 minutes to go, Albion crossed on two more occasions as Strong grabbed his second before Harrison Cully rounded off proceedings for a Plymouth side that will be eyeing up promotion next term.

Joe Berics scored a late try as Ampthill and District came from behind to beat 14-man Rosslyn Park at the Rock.

In their final match of the season, Ampthill trailed 21-20 heading into the latter stages of this encounter despite a red-card being shown to Park’s scrum-half just before half-time.

But after waves and waves of pressure, Berics sniped his way over in the final play of the game to snatch the win for the As.

Rosslyn Park had led 14-3 just after the break after tries from James Inglis and Andrew Henderson, in response to a penalty from Stef Jones

Ampthill used the extra man to their advantage in the second-half as Paino Hehea and Sam Baker both crossed before the visitors went over again to put them 20-14 ahead.

However, Park hit back and on 75 minutes Jamie Harris looked like he had won it for the hosts with a converted try, but Berics’ late score sealed the away win for Ampthill.

Coventry ended their season with an eighth consecutive victory as they edged out Loughborough Students to finish this campaign in fourth place.

Tries from Tom Poole and Cliffie Hodgson put Rowland Winter’s men ahead at half-time after Loughborough’s Kehinde Olowofela had opened the scoring.

A score from Harry Simmons nudged Students ahead, but Will Maisey’s boot made sure Coventry had a 13-12 lead heading into the final quarter.

However, the hosts went in front for the third time in this encounter as Owen Waters converted his own try on 70 minutes, but once again, Cov responded.

Quick-fire scores from Max Trimble and Corey Hircock ultimately sealed the win for Cov with Waters slotting over a late penalty to salvage a bonus-point for Loughborough.

Birmingham Moseley completed Kevin Maggs’ tenure at the club in style as they roared to a crushing nine-try rout of Fylde at Billesley Common.

Maggs’ time at the Midlands side has now come to an end, but he couldn’t have asked for a better parting gift as his team had four tries and a bonus point in the bag by half-time.

Esher secured a top eight finish in National One after a fifth straight victory over Macclesfield.

Esher grabbed the only try after half-time as Beckett crossed for his second to see the game off and clinch eighth place for the Surrey side.