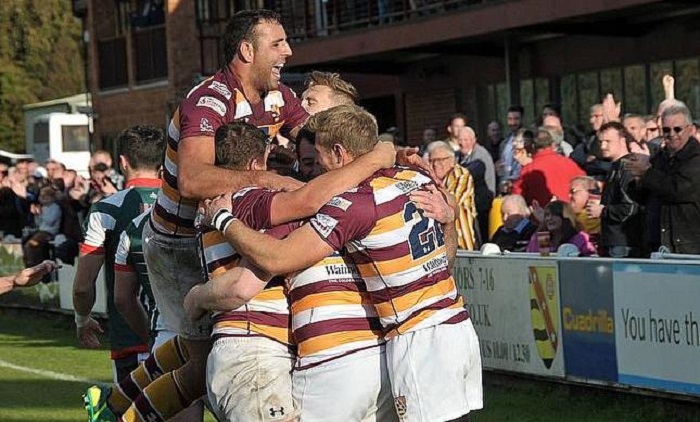 Fylde currently sit bottom of National One and with just 10 games remaining in the campaign, points are starting to become a necessity.

Warren Spragg’s men are 20 points adrift of 13th placed Loughborough Students as we begin the final few months of the season and with time running out, the last fixture Fylde would have wanted this weekend was a trip to league leaders Coventry.

Rowland Winter’s side are 15 points clear at the top of this division and they have not lost at home since October 2016, but Fylde did beat the Midlands outfit this time last year at Woodlands, so this young squad are capable of inflicting another defeat on Cov.

It is top against bottom in National One this weekend as league leaders Coventry welcome Fylde to the Butts Park Arena. Director of Rugby Rowland Winter described last week’s win over Bishop’s Stortford as ‘exceptional’ as his side clinched their 18th victory of the campaign to stay 15 points clear at the summit of this division.

The Midlands club have caught the attention of the national press in the last seven days and that comes as no surprise as they edge towards promotion. However, if Fylde were to get a result at Coventry this weekend, then that would certainly grab the headlines. Warren Spragg’s men are currently rooted to the foot of the table and now find themselves 20 points off safety with 10 games left to play. Spragg said his side need to start “cutting out their mistakes” if they are to begin turning their fortunes around and if they were to end a run of seven straight defeats this Saturday, it would be the result of the season so far.

It was another perfect home display by Darlington Mowden Park last weekend. A ruthless performance saw Danny Brown’s side see off Old Albanian to remain 15 points off top spot heading into the final third of the campaign. Captain Ollie Hodgson stated that it will be very difficult to catch Coventry, but DMP are continuing to do all they can as they head into this Saturday’s clash with Old Elthamians on an eight match unbeaten run.

They travel to College Meadow with their hosts thoroughly enjoying their season in National One. Despite seeing a lead slip away from them against Caldy last time out, Gavin Lach’s side occupy sixth the table and have won 11 games this term. In fact, home seems to be where the heart is for OEs as they have lost just twice on their own patch so far, so they are more than capable of inflicting a defeat on the second placed side in the division.

It was much more like it from Ampthill and District last Saturday. Director of Rugby Mark Lavery described their win over Fylde as “professional” as the A’s extended their unbeaten streak to six matches following a comfortable away victory. The Bedfordshire side are doing everything they can to stay on course for a third place finish and they are back at Dillingham Park this weekend looking to continue their purple patch in form.

But their visitors will be in a high spirits. Loughborough Students coach Gerard Mullen praised the application of his players following their morale-boosting win over Rosslyn Park in Round 20 that moved the Midlands side four points clear of the bottom three. It was a welcome win for Students and another victory at a tough place like Ampthill would be the perfect start to February.

Will it be third time lucky for Plymouth Albion this weekend? Kieran Hallet’s side prepare to welcome Caldy to Brickfields this Saturday for their first home game of 2018 after their previous two matches against Bishop’s Stortford and Loughborough Students were postponed. Added to that, Albion will be itching to produce a performance on their own patch after losing narrowly to Cambridge last Saturday which slightly dented their chances of finishing second this term.

Hallet had no excuses for his team’s display a week ago, but looking to capitalise on their misfortune will be Caldy. In contrast, they produced a performance of character in Round 20 as they came from behind to beat Old Elthamians to secure their fourth win in five matches. Simon Verbickas’ men have been one of the standout sides over the last month and with a spot in the top half now in their sights, they will be keen to continue their sequence of positive results.

Blackheath head coach James Shanahan was pleased by their response last weekend as they clinched a deserved win over Birmingham Moseley at Well Hall. Following their loss away at Hull Ionians, this was the reaction ‘Club’ were looking for and now they will be keen to bounce back on the road when Shanahan makes his return to Old Albanian after leaving the club in last summer.

The visitors currently accommodate fifth place in the division and are having a strong campaign whilst hosts Old Albanian are fighting for survival. Head coach Gavin Hogg was delighted with his players for being able to clinch a bonus-point in their defeat at Darlington Mowden Park last Saturday because at this stage of the season, any point could prove vital in their bid to stay in the division. As things stand, OAs are 10 points from safety, but a second home win in just under a month would seriously enhance their chances of beating the drop.

It has been a difficult start to 2018 for Bishop’s Stortford. Three straight defeats since the turn of the year have threatened to take the shine off a wonderful campaign, but they can get back on track this Saturday when they visit Hull Ionians. Andy Long’s side still sit seventh in the table following an impressive first half of the campaign and the current National Two South champions will be keen to recapture their form from 2017 as quickly as possible.

Granted, Stortford have played two of the top three sides in recent weeks, but their latest assignment against Hull Ionians won’t be straightforward. The I’s did miss the chance to move out of the relegation places last weekend as they lost to Esher, but they are just four points from safety as we begin the final third of the campaign. However, the Yorkshire outfit seem to be a different proposition at Brantingham Park because all five of their victories this term have come at home. Can they produce another positive result on their own patch this Saturday?

After an excellent display against Old Albanian in Round 19, Birmingham Moseley’s inconsistency reared its head once again as they fell to a defeat at Blackheath last time out. It has been a season of transition at Billesley Common with Richard Protherough taking over the reins from Kevin Maggs at the start of the campaign, but the Midlands club will be keen on improving their recent form as we enter the final few months of the term.

Moseley host Esher this weekend having won just two of their last seven matches which has halted their progress up the division and their visitors this Saturday will be looking to inflict another negative result on the home side. Esher come into this fixture on the back off a confidence-boosting win over Hull Ionians which moved the Surrey outfit 10 points clear of the relegation places. Now, Esher will be hoping back that performance up by securing their first away victory since April.

Cambridge’s Director of Rugby Ross Stewart praised his team’s defensive work and intelligence last weekend as they upset the odds by clinching victory over fourth placed Plymouth Albion. Considering, the Blood and Sand were flirting with relegation last term; they are having a really strong campaign this year as they currently sit 10th in the table and head into this weekend having lost just two of their last seven matches.

Their hosts, Rosslyn Park, are also in a similar vein of form. Kieran Power’s side have turned their season around since the beginning of the December and they come into this fixture on the back of just one defeat in six games. That aforementioned loss occurred last Saturday away at Loughborough Students, but Park are now 11 points clear of the drop zone and they will be hoping to stay clear of the relegation places by securing a third home win on the bounce.