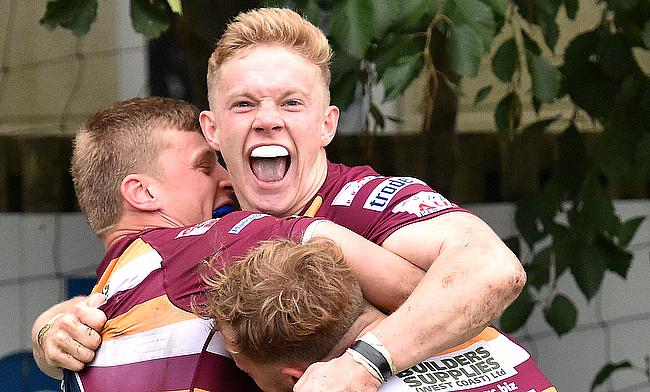 A late Luke Fowden try earned Fylde a narrow victory over Bishop’s Stortford as they continue to try and fight for survival in National One.

Fowden’s touchdown two minutes from time condemned Stortford to their first defeat since the beginning of October as the division’s bottom club hit back to move to within 10 points of safety.

It was a good weekend for Caldy and Loughborough Students down at the wrong end of the table as both sides secured victories to move away from trouble while Rosslyn Park dropped into the bottom three after defeat against the league leaders Coventry.

Rowland Winter’s side are now 12 points clear at the summit after their 13th straight win while second placed Darlington Mowden Park left it late to beat Ampthill & District.

Coventry put in a superb second half display to extend their National One winning run thanks to a bonus-point victory over Rosslyn Park.

The league leaders were behind early on as Hugo Ellis opened the scoring for Park, but tries from Tom Emery and Rob Knox edged Cov ahead at the break.

With the score at 14-13, the visitors then pulled away after half-time.

Radwan touched down to put the hosts ahead after just five minutes, only for Ampthill wing Sam Baker to hit back.

A penalty from Lawrence Rayner put the A’s in front after the break, but Adam Brocklebank’s score nudged DMP into the lead.

The lead changed hands once again as Maama Molitika went over for Ampthill on 71 minutes to put them 15-14 up, but Radwan’s speed allowed him to dot down late on and steal the game for Darlington.

Dan Mugford starred as he scored two tries as Plymouth Albion returned to winning ways thanks to this victory over Hull Ionians.

The first half produced 22 points, 19 of which went to the hosts as Jack Arnott and Mugford (2) crossed to put Albion in a commanding position at the break.

Chris Bell’s penalty midway through the first period was as good as it got for Hull as Plymouth surged clear.

Tries from Dean Squire and Joe Snow completed the win for Kieran Hallet’s side who jumped back up to third place in the division.

Blackheath kicked off December with a victory as they secured a bonus point win over Cambridge at Volac Park.

Cambridge began fighting back in the second half as Jack Green landed a penalty, but Josh Davies’ try and the boot of Joe Tarrant ultimately sealed the win for Club.

The hosts did have the final say on proceedings as Rob Conquest dotted down, but the Blood and Sand were left empty handed on their own patch.

Tom Grimes’ try put Fylde 7-0 ahead before scores from Oli Parkinson and Tom Carleton gave the hosts a 16-point lead.

A penalty try for Stortford on the stroke of half-time made it 19-10.

Alex Dolly added a penalty after the interval for Fylde, but a converted Chris Smith score brought Stortford right back into the contest before Stephen Ball touched down to make the game level.

However, Fylde were to have the final say as a lovely offload from Dolly found the onrushing Fowden who barged his way over to secure the win on his debut for the Lancashire club.

Ciaran Moore’s try helped the Midlands side into an early 5-0 lead, but two tries from Alex Brown and one via Ian Kench gave OEs the initiative.

Brown along with Tom White, Ollie Claxon, Kieran Moffat and Ben King all touched down in a commanding second half display by OEs while Chris Brightwell grabbed a brace for the visitors.

Loughborough Students produced a second-half fightback as they secured victory against Esher to move out of the bottom three.

Four Esher tries put them in control at the break despite Loughborough scores coming via Jack Moates and Jack Stapley.

However, a penalty try, a close range score and Luke Frost’s effort put the Students three points in front after the restart.

Another penalty stretched their advantage to 13 points and despite Esher crossing for their fifth try of the afternoon, Loughborough wrapped up their fourth win from their last five matches as they scored late on.

Caldy picked up their second home win on the spin as they cruised to victory over Old Albanian at Paton Field.

Harrison Crowe got the first try of the afternoon before Nick Royle and Gavin Roberts sealed the win for the Wirral side who are now four points clear of the relegation places while OAs are eight from safety.