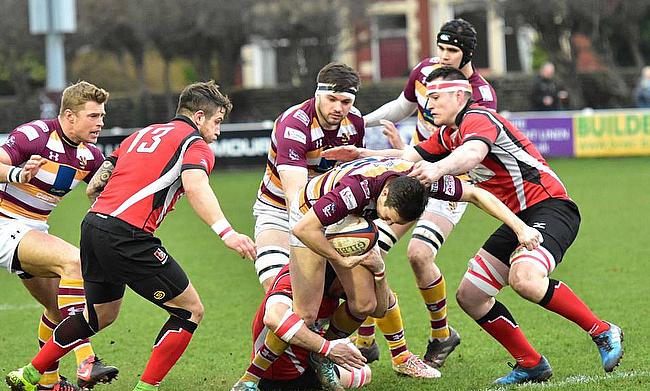 Fylde continued their excellent recent form as they beat Blaydon which leaves the north-east still teetering on the edge of the relegation zone.

Blaydon had won three of their last four matches ahead of their clash with Fylde, but failed to build on that impressive sequence of results as they remain just a point clear of the bottom two.

Both of Blaydon’s releagtion rivals – Macclesfield and Hull Ionians – sufferred defeats with the aforementioned sides in action against one another this coming weekend.

At the right end of the table, Cambridge put on a spirited display against runaway league leaders Hartpury College, but couldn’t stop John Barnes’ men from securing their 23rd win of the season.

There were also victories for Plymouth Albion, Ampthill and Rosslyn Park while Birmingham Moseley were left stunned as Darlington Mowden Park produced a remarkable comeback to beat the Midlands side.

Hartpury College held off a valiant Cambridge fightback to secure their 23rd successive victory of the season.

Luke Eves scored College’s seventh try of the afternoon just after the interval, but three tries in a spirtied second-half peformance by Cambridge reduced the deficit to just 11 points.

Mike Ayrton, Albert Portsmouth and Tom Trotter crossed in the opening 40 for the Blood and Sand while Tom Nutley, Louis Rawlings and Wade Schoeman went over in the second period to secure two well derserved bonus-points for Ross Stewart’s side.

A late missed conversion from Loughborough Students’ Will Kaye saw Plymouth Albion hang on for their sixth straight victory.

A try by winger Matt Crosscombe gave Albion the lead before the visitors edged ahead thanks to a second penalty from Kaye following Jake Keer’s early try.

The hosts levelled the game up just after the hour as Matt Shepherd landed a penalty before Plymouth went ahead for the first time in this contest as Herbie Stupple crossed with five minutes remaining.

But there was more drama to come as Kaye scored a superb indivdual try in the final play of the game, but the full-back could not give his side a share of the points as his conversion was off target.

A commanding second-half performance saw Ampthill and District ease to a comfortable bonus-point win over Esher at Moseley Road.

The visitors were 22-15 ahead at the break thanks to scores from Stef Jones, Joe Tarrrant and Sam Baker, with Joe Beckett crossing twice for Esher.

However, that was as good as it got for the home side as Ampthill scored 24 unanswered points in the second period.

Jones and Baker both grabbed another try while Alex Mitchell – on his return from England U20 duty – also got in the on the act to help seal the victory for the A’s.

DMP found themselves 14-0 down after just eight minutes as James Williams and Ed Sheldon crossed for the hosts.

The home side continued to tigthen their grip on this contest as Williams crossed for his second try after the break, but Kevin Maggs’ side were then left shell-shocked by the Darlington response.

A try from in-form winger Adam Radwan got the ball rolling for the visitors and when Jack Kenny Preece was sin-binned, DMP took full advantage as Jack Payne crossed.

With the deficit now just five points, momentum was with DMP. Williams missed a penalty for the home side which proved costly as three minutes from time, James Fitzpatrick crashed over the line to level the scores. Gary Law then held his nerve to clinch the win for the visitors.

Rosslyn Park secured their seventh win from their last eight matches as they comfortably beat Blackheath at Well Hall.

Russ Weir, Andrew Henderson, Hugo Ellis, Adam Frampton and Harry Hudson all crossed for the home side, with fly-half Harry Leonard converting four of the tries as well as a penalty.

Leo Fielding and Tom Baldwin scored the two Blackheath tries, with Fiedling converting both as well as adding a penalty, but it is now no win in four for ‘Club.’

Coventry scored seven tries for a resounding bonus-point win, condeming Hull Ionians to a sixth National One defeat in a row.

Two tries from Callum Irvine and a score via Phil Eggleshaw reduced Coventry’s lead to just four points after a brace from Pete White and scores by Heath Stevens and Tom Howe.

A penalty try after the interval put Hull Ionians 31-28 ahead, but scores from Jimmy Litchfield, Stevens and White put Cov in charge of this contest.

But, Hull Ioniains kept battling away and scored the final try of the afternoon through Greg Lound before Cov’s Will Maisey completed the scoring for the afternoon as he slotted over a late penalty.

The full-back opened the scoring for the afternoon before Jack Daly and Bedroll put OAs in control as they led 17-5 at the break.

Foster then dotted down on three more occassons in the second 40 and was joined by Freddie Tuilagi and Charlie Hughes.

David Marwick, Matt King and Sam Broster crossed for Macc who are now 14 points from saftey, but they do have a game in hand.

Fylde denied Blaydon the chance to move away from the relegation zone as the Lancashire side secured their third win on the spin to continue their rise up the table.

Paul Arnold’s men are now 19 point clear of the drop zone after an excellent Feburary while Blaydon’s recent resurgence has now been a halted, but they still remain one point above the bottom two.

It looked as though the north-east side were going to increase that gap after they led 14-0 midway through the first-half thanks to scores from Jason Smithson and Dan Marshall, but Fylde hit back as Connor Wilkison and Gregg Nicholls touched down to reduce Blaydon’s lead to just two points by the break.

The visitors did increase their advantage after the interval thanks to a penalty from Newcastle Falcons player Brett Connon, but that was as good as it got for Mickey Ward’s men as Fylde took control of this contest.

Two quick-fire tries from Scott Armstong helped the hosts into a 26-17 lead and that was to be the last of the scoring as Fylde continue their good run of results.