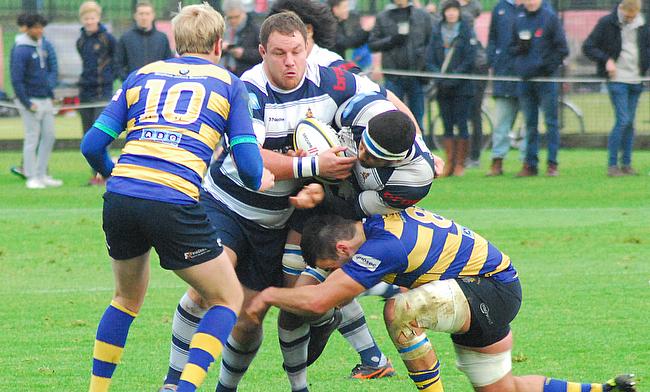 It was a dramatic weekend in National One and Round 25 witnessed contrasting fortunes for teams at the bottom and the top of the division.

At the wrong end of the table, Fylde had their relegation to National Two North confirmed after a defeat to Blackheath at Well Hall, whilst at the summit, Coventry are on the verge of clinching the title and gaining a place in the Championship.

Rowland Winter’s side beat Old Elthamians and they are now 30 points clear of second placed Darlington Mowden Park after they fell to a defeat against Rosslyn Park.

It all means that this coming Saturday could see Coventry win the league if they pick up a bonus-point win at Caldy.

Plymouth Albion are down to fourth in the table after a defeat to Ampthill & District in Round 25 and elsewhere, Birmingham Moseley edged past Cambridge and Bishop’s Stortford sealed a welcome win against Esher.

Meanwhile, the battle for survival continued in National One as Old Albanian clinched a vital victory over Loughborough Students and Hull Ionians extended their unbeaten run after seeing off Caldy.

Coventry have all but secured promotion to the Championship after an emphatic victory over Old Elthamians at Butts Park Arena.

Cov, who can clinch the National One title this coming weekend, led 26-13 at half-time through Rob Knox (2), Heath Stevens and Jack Preece.

“You can just see from the performance against @ElthamiansRFC how much we talk about pride in our performance every week, pride in each other, in the shirt and in the club” ??

Another try for Knox plus a score from James Stokes  – his 18th of the season – and a penalty try put the result beyond doubt as Rowland Winter’s side secured their 24th successive victory on their own turf.

Fred Hosking crossed for OEs’ only try of the afternoon whilst Joe Carlisle kicked eight points for the visitors.

A brilliant first-half display helped Rosslyn Park pick up their first win since the beginning of February at the expense of Darlington Mowden Park.

The hosts ran in three tries in the opening 40 minutes through Henry Robinson, Hugo Ellis and Oliver Hassell-Collins.

After leading 24-5 at the break, Kieran Power’s side then saw Darlington Mowden Park mount an impressive comeback as Warren Seals, Matt Dudman and Joe Craggs added to Grant Connon’s first-half effort to give the away side a two-point lead.

Despite DMP’s response, Rosslyn Park regrouped and tries from Ben Marfo and Ellis snatched the victory and condemned Darlington to their third straight loss.

Ampthill and District came from behind to beat Plymouth Albion and leapfrog them in the National One standings.

Ampthill held a 21-14 lead at half-time thanks to scores from Joe Berics, Billy Johnson and Pete Weightman, but Albion responded after the break.

Following tries via Matt Shepherd and Sam Holmes, Harvey Skinner crossed before Shepherd grabbed his second to give Albion a 28-21 lead.

However, Ampthill produced a superb performance in the final quarter to clinch the victory as Weightman and James Pritchard both dotted down to leave the A’s just two points off second spot.

Fylde have been relegated from National One after falling to their 22nd defeat of the season away at Blackheath.

After seven years in the third tier of English rugby, Warren Spragg’s side will be playing in National Two North next season.

The Fylde defence was breached on four occasions in the first half of this encounter as tries from Joe Tarrant, Matt Miles, Marcus Burcham and Jack Walsh put the hosts in complete control.

New territory for a lot of us next season. We might be down, but we’re in a better place as a group than we were 12 months ago. Will keep on fighting for every minute this season to prepare for next year in the best way possible. #runitfylde https://t.co/VDE5Rv5hXD

Tom Carleton did strike back for Fylde just before half-time, but Alex Pickersgill’s effort six minutes into the second-half kept ‘Club’ in the driving seat.

The visitors showed great spirit and determination as the half ticked by, but their fate was eventually sealed when Burcham crossed for his second score late on.

Moseley winger Alex Hearle powered over for the only try of the first period as the hosts led 7-3 at the break.

The Blood and Sand hit back after the interval as Jake McCloud barged over the line, but that seemed to spark Moseley into life as Afeafe Haisala finished neatly to put Richard Protherough’s side back ahead.

Ben Penfold reduced the arrears from the tee, but Moseley held out to secure a fourth win from their last five games.

Bishop’s Stortford sealed their second win in 2018 as they beat Esher in a pulsating contest at Molesey Road.

Tries from Ryan Hutler and Rob Duff helped Andy Long’s side into an 18-0 lead, but Esher hit back following a close-ranged score.

Niall Saunders and Joe Beckett then cut Stortford’s lead to just a point after they both went over for the hosts, but an intelligent dummy and try from Nick Hankin saw the away side move 25-17 ahead.

And George Cullen’s third penalty of the afternoon ensured Stortford picked up their first victory in three matches.

A spell of three tries in seven minutes saw Hull Ionians clinch a dramatic and vital win over Caldy in their fight to avoid relegation from National One.

Before the hosts had taken control, Oliver Fox had opened the scoring for the I’s and the home side now led 26-14.

Both teams exchanged penalties, but Caldy set-up a tense finish as Gavin Roberts dotted down to reduced Hull Ionians’ lead to five points.

However, Alex Crockett’s men held on for the win which leaves them five points clear of the relegation places.

Old Albanian boosted their hopes of beating the drop in National One as an excellent second-half performance helped them secure an impressive bonus-point win over Loughborough Students.

The OAs were staring at a defeat at half-time as scores from Tim Bitirim, Callum Watson and Owen Waters gave the Students a 19-0 lead.

However, the hosts completely turned the game around after the break as Charlie Hughes, Elliot Ontayinbo (2), Nick Foster and Sam Lunnon all touched down to seal a crucial win for Gavin Hogg’s men.

OAs remain seven points from safety despite this victory as Hull Ionians beat Caldy, but the Hertfordshire outfit are still fighting for survival after back to back wins.