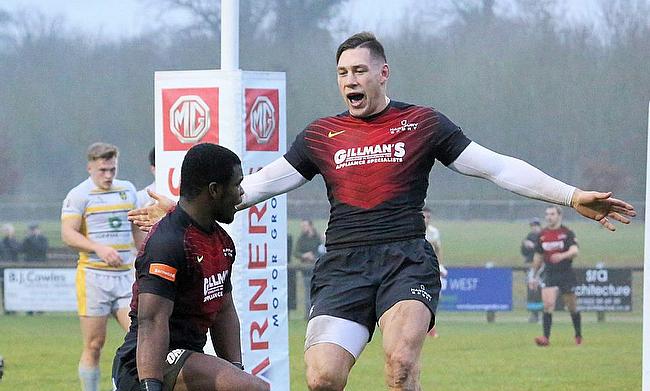 There was no Christmas hangover for Hartpury College as they continued their fine form to earn their 17th consecutive win of the season to maintain their dominance in National One.

This latest victory over Esher leaves them 23 points clear of the rest of the field and a place in the Championship next season is looking incredibly likely even at this stage of the season.

The chasing pack are realistically all competing for second place in this division and once again Birmingham Moseley occupy the silver medal spot as they secured a victory over Hull Ionians whilst Plymouth Albion and Ampthill & District both slipped up on their travels.

Meanwhile down at the bottom, Macclesfield remain at the foot of the table after suffering a home defeat against Coventry while it is also looking grim for Blaydon who lost to Loughborough Students.

League leaders Hartpury College found top gear once again as they demolished Esher to clinch their 17th consecutive win of the season.

College were out of sight at half-time, Jonas Mikalcius and Adam Hastings both scoring two tries and Luke Eves and Will Tanner one apiece.

Tries from Andrew Garner and Tom Williams had given Esher something to cheer about in the first-half, but the hosts continued to be ruthless after the break.

Harry Randall, Levi Davis (on debut for Hartpury) and Jake Polledri (2) also crossed to put the icing on the cake for John Barnes’ men.

Esher grabbed two tries in the second period through Tom James and Joe Brown, but this was another miserable away day for the Surrey side.

James Williams’ accuracy from the kicking tee helped Birmingham Moseley begin 2017 with a victory as they beat Hull Ionians to move up to second in National One.

Alex Grove’s touchdown secured a bonus point, but Hull Ionians continued to battle an ended the game on a high as Greg Lound and Sam Boxhall added to Joe Allot’s first-half try.

Blackheath began the New Year in style as they ran in seven tries to pull away from a spirited yet Fylde side at Well Hall.

An inspired first half performance helped Club secure their 12th win of the season which moved them into third position in the National One table.

Leo Fielding’s first-half try, a 70 metre break, was the pick of Blackheath’s scores which completed a dominant performance in an opening period where Kieron Scutt, Markus Burcham, Sam Eydmann and Mike Perks all crossed without reply.

Twelve points from the boot of Fielding and a further score from Jake Lloyd as well as Penalty Try reflected Blackheath’s dominance.

Fylde did have moments of quality in the second period as Anthony Bingham and David Fairbrother both went over, but it was once again a torrid day on the road for Paul Arnold’s side.

Rosslyn Park secured their third successive win with a gutsy victory over Plymouth Albion at The Rock.

Mark Kohler and Robin Wedlake traded converted tries to make the game level at 7-7 by half-time.

Replacement Henry Robinson put Park in front just four minutes after the restart as he touched down from close range.

Plymouth had Setareki Raumakita sin-binned in the second period and it got worse for the visitors when player/coach Kieran Hallett was taken off injured.

But there was to be no comeback from Albion as Harry Leonard slotted over a penalty just after the hour which ultimately sealed an excellent win on home turf for Park.

Ampthill and District’s six game winning run came to an end as they were beaten by Darlington Mowden Park at the Northern Echo Arena.

DMP exploited a slow start by Ampthill as Jamie Barnard latched on to a superb Josh Bragman chip to open the scoring.

But Joe Tarrant crossed before half-time to level the game up and his side were ahead with 15 minutes remaining as Alex Mitchell dotted down in the corner.

Darren Fearn went close for the hosts after a good spell of pressure and DMP were eventually rewarded for their endeavour when Ben Frankland crossed.

Bragman held his nerve to convert and the home side were able to hold on to extend their unbeaten run to three matches and which has moved them eight points clear of the bottom three.

Coventry kicked off 2017 by securing only their second away win of the season as they beat Macclesfield at Priory Park.

Cov ran in first-half tries through Tom Howe, Jack Willis and Tony Fenner after Ryan Parkinson had given Macclesfield a surprise early lead.

On his 99th appearance for the visitors, Cliffie Hodgson touched down for the first score of the second-half before Willis added his second and Coventry’s sixth of the afternoon to wrap up the win for Rowland Winter’s side.

Loughborough Students came out on top against second-bottom Blaydon after the north-east side had got off to a flying at Epinal Way.

Blaydon’s Tom Grimes and Robbie Kalbraier both went over inside the first 15 minutes before scores from Jordan Olowofela and Gair Currie sparked the home side into life.

However, the visitors did go into the break 17-12 up as they slotted over a penalty just before half-time.

After the restart, Loughborough scored two tries through Sam Pointon and Riccardo Brugna to put them ahead in this match, but Andrew Davidson capped a good performance with a charge-down try to edge Blaydon back in front.

However, a second for Pointon and a score from James Lasis gave Loughborough the advantage once again.

Blaydon continued to respond and reduced the hosts’ lead to just nine points when they were awarded a penalty try 13 minutes from time, but Harry Simmonds and Will Kaye ended their brave fightback despite the away side scoring the final try of the afternoon through Keith Laughlin.

Two late penalties from Old Albanian fly-half Ben Palmer denied Cambridge their third away victory of the season in another superbly contested game between these two sides.

Tries from Stef Liebenburg and Mike Ayrton gave the visitors and early 12-0 lead before an Oliver Burgess try and a first penalty of the afternoon for Palmer reduced the deficit.

James Ayrton then increased the Blood and Sand’s lead when he darted over, but a Jack Daly score tied the game up at 17-17 at half-time.

Palmer landed another penalty to begin the scoring just after the break, but Cambridge were able to go back in front when Matt Hema crossed.

But indiscipline crept into Cambridge’s game and they were punished for their mistakes as Palmer slotted over two penalties to snatch the win for James Shanahan’s men.