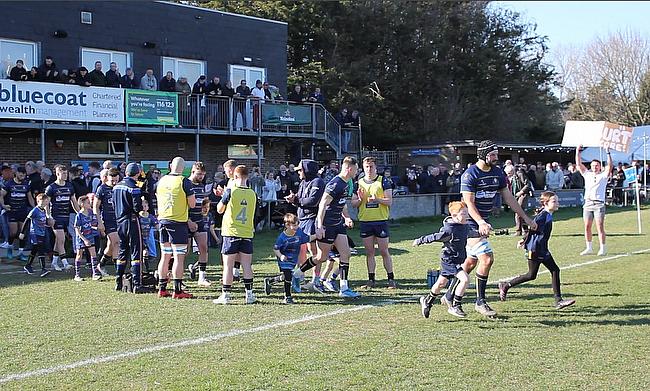 National One clubs Rams RFC and Chinnor were part of a landmark evening on Friday night whilst Sedgley Park have momentum behind them and National Two South’s title race experienced its latest twist.

Robbie Stapley capped off a special 24 hours as he celebrated the birth of his second child by scoring a hat-trick as Rams RFC beat Chinnor 38-22 at Old Bath Road.

With this derby day clash becoming the first-ever National League Rugby game to be live-streamed, the hosts took centre stage in the first half and led 17-8 at the break, with Ben Henderson and Stapley (2) crossing for tries, whilst Kieran Goss dotted down in response for Chinnor.

Jak Rossiter’s score just after the interval carried the home side into a 24-8 lead before the visitors set up an intriguing final 10 minutes in Berkshire.

Keston Lines and James Bourton both went over to cut the deficit to two points but after seeing an advantage slip through their fingers against Sale FC at the beginning of the month, history wouldn’t repeat itself for Rams as Stapley clinched his hat-trick before Henry Bird put the icing on the cake for Seb Reynolds’ charges.

The victory for Rams leaves them fifth in the table and 12 points off the top with a game in hand.

Down at the foot of the division, Darlington Mowden Park eased any lingering relegation concerns as they secured a late 23-22 win over rivals Leeds Tykes in Yorkshire.

Talite Vaioleti scored a try two minutes from time, with Oscar Yarndall converting to claim a first win for a month for Garry Law’s men.

DMP had been leading 16-0 thanks to the boot of Yarndall and Ben Frankland’s score but Leeds Tykes roared back to hold a six-point cushion with 12 minutes remaining.

Adebowale Ademakin, Will Hardwick (2) and Seremaia Turagabeci all crossed and the latter did have a chance to steal the win from the tee late on, but his penalty missed the target.

The triumph for Darlington Mowden Park now leaves them seven points above the drop zone whilst Leeds Tykes’ two bonus-points means they are now four points from safety with two games in hand.

Elsewhere in National One, Plymouth Albion (12th) are still scrapping for their status in the third tier after falling to a 45-28 defeat to Birmingham Moseley at Billesley Common, Sam Pointon and Gregory Fisilau with braces for the hosts.

After scoring four against Stourbridge last week, winger Rhys Henderson did so again in another thumping win for the Tigers whilst Jamie Harrison chipped in with a hat-trick.

Andy Riley, Matt Gallagher, Cashel Chilvers, Jacob Tansey and Ollie Glasse finished the game with a try apiece whilst Huddersfield’s only real moment of joy came in the final 10 minutes through Philip Cadogan.

Scott Barrow’s side couldn’t have done much more to keep the pressure on Hull and third-placed Rotherham Titans could be back in the title hunt themselves.

Another outstanding performance by @SedgleyTigers in @Natleague_rugby #Nat2N yesterday. Sedge beat Huddersfield 80-5. RVR caught up with Tigers' Jamie Harrison and Alex Benba to catch their thoughts on the game and the upcoming top of the table clash with Hull next Saturday. pic.twitter.com/jmrkdEHD18

The Yorkshire outfit took control after a slow start to gain a bonus-point 34-17 win at Chester to move to within seven points of the league leaders.

Tries from Ben Ivory and Alex Reed helped the hosts into a healthy 12-0 lead but their advantage was wiped out by the interval.

Jamie Cooke and Richard Stout both went over before Rotherham put their foot down in the second period as Keifer Laxton, Connor Field and Cooke all crossed.

Also across National Two North, Stourbridge had to battle hard to earn a 45-38 victory over Blaydon and Tynedale made it six wins in a row as they narrowly beat Sheffield Tigers 24-22 at Dore Moor.

Elsewhere, Bournville capitalised on Loughborough Students’ indiscipline as they came back from 14 points down to claim a 26-24 triumph in the Midlands and a last-gasp Tom Davidson penalty ensured Wharfedale clinched a 23-21 win over Harrogate.

There was more late drama at the top of National Two South as Dan Rowland plunged over for a last-minute try as Esher edged out Worthing Raiders 30-29 to move to the summit of the division.

Harri Lang and Matt Lowes went over for Peter Winterbottom’s side in the first half, only after scores from Worthing’s Curtis Barnes and Will Scholes.

A third try of the afternoon for the Raiders scored by Matt McLean put the hosts 19-15 in front and despite Rowland responding for Esher almost immediately with his first effort of the day, Worthing moved back in front when Elliott Quinton dotted down on the hour.

📺 The National League Rugby Review Show@WMuggleton hosts from Worthing as we look back on an historic weekend for levels three and four.

Sam Morely and McLean then swapped penalties as the tension increased at The Rugby Park but Rowland had the final say as he darted over in the corner to send Esher three points clear at the top.

There were two other games in National Two South this weekend with Bury St Edmunds sealing a 20-15 win against Guernsey Raiders on Friday night whilst Leicester Lions held the bragging rights in the Midlands after beating Hinckley 26-17.