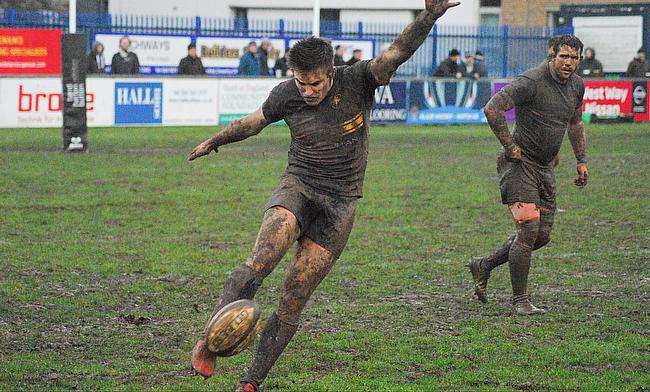 Hull Ionians and Esher both inflicted defeats on the bottom two clubs in National One which dented the survival chances of Fylde and Old Albanian.

The I’s edged past Fylde at Woodlands which means Warren Spragg’s side remain 22 points from safety with eight games left to play, while Esher’s comfortable victory over OAs leaves the Hertfordshire outfit 13 points adrift.

Victory for Hull boosted their chances of beating the drop as they sit two points behind 13th placed Loughborough Students, who claimed a well-deserved bonus-point against league leaders Coventry.

Rowland Winter’s side are still 16 points clear at the summit as second placed Darlington Mowden Park secured a victory over Blackheath, but there were defeats for Ampthill & District and Plymouth Albion against Cambridge and Old Elthamians, respectively.

Coventry survived a scare from Loughborough Students as they battled to their 20th National One victory of the season.

After a penalty try for Loughborough, Dave Brazier and Nile Dacres both scored to give Coventry a slender lead in the first-half.

”Perhaps we didn’t get the reward we could have done in certain areas, but @LboroRugby challenged us for the whole 80 minutes.” ??

Both sides exchanged scores after the interval as Anthony Matoto’s effort was cancelled out by Jack Stapley and the Students winger was on hand to respond once again after Alex Grove had gone over for Cov.

The hosts were still firmly in this contest at 26-24, but the league leaders had the final say as James Stokes darted over to seal a hard-fought victory for Rowland Winter’s side.

Callum Mackenzie (2) and Warren Seals scored second-half tries as Mowden Park picked up another victory on their own patch.

A score from Adam Radwan and two penalties from Seals helped the home side lead 13-12 at the break, with Jake Lloyd and Tom Stradwick going over for the visitors.

After the restart, Blackheath did go in front when Lloyd grabbed his second try of the afternoon, but Danny Brown’s men were able to reassert their authority once again as they extended their unbeaten run to 10 matches.

The fly-half scored 10 of his side’s 20 points to secure Cambridge’s fifth victory from their last seven matches.

After Sam Baker had opened the scoring for Ampthill, Penfold nudged the Blood and Sand ahead with two penalties and then slotted a conversion following Oli Petrides’ try five minutes before half-time.

Penfold added the extras once again as Albert Portsmouth crossed on 53 minutes and despite James Pritchard landing three points, Cambridge held firm for the win.

Max Wilkins scored Old Elthamians’ only try of the game as the hosts continued their superb season in National One with a narrow victory over Plymouth Albion.

Wilkins crossed in the first half as he broke through two tackles to charge over. Joe Carlisle converted the try to add to his two earlier penalties as OEs led 13-7 at the break.

Albion had dotted down via Jack Owlett and it was first blood to the away side after the interval as Cameron Setter went over, but a third penalty of the afternoon from Carlisle was enough to clinch a solid win for Gavin Lach’s men.

A try in either half proved just enough for Birmingham Moseley as they won a war attrition against Bishop’s Stortford at Silver Leys.

The host led 7-0 thanks to Nick Hankin’s try, but they were pegged back almost immediately by Ryan Roach who rumbled over from close range.

George Cullen extended Stortford’s lead to five points at the close of the first half, but that was as good as it got for Andy Long’s side.

Ciaran Moore continued his brilliant, recent scoring form to give Moseley the lead in the second period and a penalty from Sam Hollingsworth nine minutes from time secured the victory.

Caldy continued their excellent home form in National One as they earned a sixth win from their last seven matches at Paton Field by beating Rosslyn Park.

The visitors got the scoring underway through a Harry Leonard penalty, but tries from Nick Royle and JJ Dickinson helped the home side lead 14-3 at half-time.

Dickinson scored his second try after the restart and was joined by Stuart Cross and Tom Banks in the final 10 minutes of this contest to complete the win.

Esher added a dent to Old Albanian’s survival hopes as the hosts secured a bonus-point victory in Surrey.

Joe Bridger had gone over for Old Albanian and the away side were able to cut Esher’s lead to 11 points when Morgan Thompson slotted over a penalty after the restart.

But, Esher responded well and wrapped up the win when Harding scooted over to complete his hat-trick.

Hull Ionians took another step closer to survival in National One as they edged out relegation rivals Fylde at Woodlands.

A Rikki Stout try gave Hull Ionians the lead, but Fylde were back level when Adam Lewis barged his way over from a driving maul.

The usual quality of photos that we are served every home game by @cfarr9 … great work at #Fylde v @Ioniansrufc yesterday. https://t.co/oN1z09VvCz pic.twitter.com/VJRYJs1bTA

Both tries were not converted, but two penalties from Chris Bell gave the I’s a 11-5 half-time lead.

Bell landed his third kick on the hour to increase the visitors’ lead and despite Fylde having possession and territory in the second half; they could only manage a Henry Hadfield try as Hull held on.