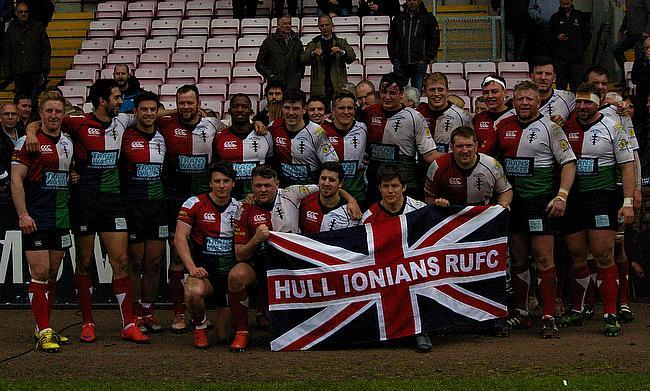 Hull Ionians and Fylde face off this weekend in National One with both sides hoping for a victory as they aim to move out of the relegation places.

The I’s and Fylde currently find themselves in the bottom three after seven rounds and between them, they have only won two matches out of a possible 14 which highlights just how important this game could prove to be, even at this early stage of the season.

Sandwiched in between Hull and Fylde are 15th placed Loughborough Students who take on daunting league leaders Coventry at Butts Park.

The hosts have lost just one of their last 18 fixtures on their own turf and another side that is lethal at home are second placed Plymouth Albion who welcome Old Elthamians to Brickfields tomorrow.

Also in the top half, it is third against fourth as Darlington Mowden Park travel to Blackheath while Ampthill welcome Cambridge to Dillingham Park and Bishop’s Stortford take the trip to Birmingham Moseley.

Elsewhere in National One this weekend, Rosslyn Park host Caldy and Esher are on the road against Old Albanian.

This may well be a Midlands derby and even though there are only around 45 minutes between Butts Park and Epinal Way, the gap between the two sides seems to be stark. Coventry look unstoppable at present. Rowland Winter’s men have won all seven of their matches so far this season and they currently sit three points clear at the top of the division.

They host Loughborough this weekend on the back off a 64-0 thrashing of Fylde which secured their 15th straight league victory. In contrast, Loughborough are craving a win. Alan Buzza’s side occupy a spot in the relegation zone heading into this clash with the league leaders and the Students are also currently bottom of the form guide. In fact, they have won just one of their last 11 games so the odds do seem firmly stacked against them this weekend. Can Loughborough upset the applecart?

Plymouth Albion take on Old Elthamians this weekend aiming to keep pace with league leaders Coventry. The home side have not put a foot wrong since the opening day of the season and head into this fixture on a six game winning streak. Albion have actually lost just one of their last 20 matches and at Brickfields, they haven’t tasted defeat since December 2016.

So that puts into context the challenge facing Old Elthamians this weekend. The newly promoted side have performed very well since joining the league in the summer, but this weekend’s trip to the south coast is arguably their toughest test yet. Gavin Lach’s side currently sit sixth in the table following four wins from seven matches and despite losing last week to third placed Darlington Mowden Park, OEs put in a positive display. They’ll be hoping to take that next step this Saturday as they look to secure one of the biggest results in the club’s history.

Fourth host third in National One this weekend as Blackheath welcome Darlington Mowden Park to Well Hall. DMP bounced back from their first defeat of the season as they saw off Old Elthamians at the Northern Echo Arena in Round Seven and they will be aiming to really get their campaign back on track by gaining a result in London this Saturday.

That is easier said than done for Darlington because Blackheath are currently going well too. Like their visitors, James Shanahan’s men have won six of their seven matches so far this term and four of those aforementioned victories have come at Well Hall. ‘Club’ were comfortable winners on home soil against Old Albanian six days ago and another triumph in front of their own supporters tomorrow could see Blackheath moved up to second in the table.

Ampthill and District are another side which is going about their business very efficiently. After a spluttering start to the campaign, the A’s seem to have found their rhythm and they welcome Cambridge to Dillingham Park on the back of fourth straight wins. The Bedfordshire side are only three points off second placed Plymouth Albion and will be favourites to make it five victories on the spin this weekend, considering they have won 15 of their last 18 matches on their own turf.

Trying to put the cat amongst the pigeons will be Cambridge. Ross Stewart’s men will be in high spirts this Saturday following a commanding victory over Rosslyn Park in Round Seven, which arrested a run of two straight defeats. The Blood and Sand currently sit in the top half of the table and they will be hoping to stay there after this weekend as they aim to gain a result at a tough venue.

Bishop’s Stortford would have been pleased to get over the line against Hull Ionians last weekend. The new boys to the division battled to their fourth victory of the campaign which leaves them seventh in the table. I am sure Andy Long and his staff would have taken that before the start of the season and the men from Silver Leys will now be looking to build when they visit the Midlands in Round Eight.

Mark Harrison’s four tries helped Birmingham Moseley secure their third win of the season last Saturday as they came away from Esher with maximum points. Richard Protherough’s men will now be hoping they can stamp out their inconsistencies as they look to improve upon their home record this weekend. Moseley have gained just one victory all term at Billesley Common and considering they won just under 75 per cent of their matches on their own turf last year, they will be itching to double their tally in front of their own supporters this Saturday.

It has been a tough couple of weeks for Caldy. After making a flying start to life in National One, the Wirral outfit have gone off the boil slightly over the last month. Simon Verbickas’ men head to London this weekend to take on Rosslyn Park, looking to put a halt to a run of four straight defeats which has seen them slide down to 10th in the table.

Caldy may will be struggling at present, but their hosts Rosslyn Park just can’t seem to get their season up and running. Park ended a run of four consecutive losses in Round Six against Loughborough Students, but failed to add to that up as they were outclassed by Cambridge last weekend. Back at the Rock, they will be hoping to spark their season into life as both sides aim for a much needed boost.

This weekend, Esher travel to Woollams to take on Old Albanian hoping to build on positives from their defeat against Birmingham Moseley in Round Six. The Surrey side created more than their fair share of chances, but it wasn’t enough for them to clinch a third win of the campaign. Esher now head to Hertfordshire having lost their last four games and like last year, their away form doesn’t make for great reading.

Esher have won just four of their last 18 fixtures on the road so Old Albanian will be hoping to capitalise on that sort of record. OAs were unable to build on an excellent win over Darlington Mowden Park as they were brushed aside by Blackheath six days ago, but after that victory over DMP in their last home game, Gavin Hogg’s men will be confident that they can achieve their third victory of the campaign and begin to start putting daylight between themselves and the bottom three.

We may only be in the middle of October, but this clash between Hull Ionians and Fylde could be so crucial in the context of the rest of the season. Both clubs currently accommodate spots in the relegation zone and both will be desperate to gain victory this weekend. Hull Ionians, are back at Brantingham Park tomorrow where they won on their last outing. Their win at home in round five against Esher is their only victory of the season thus far and having come close last weekend against Bishop’s Stortford, the I’s will be aiming to go one better this weekend.

A lot was said about Hull Ionians’ opponents, Fylde, following their humbling defeat against Coventry last weekend. Coach Warren Spragg questioned the ability of his players to dig themselves out of trouble and he and the rest of the squad, will be hoping that their predicament doesn’t deteriorate following their trip to Yorkshire. Fylde have lost six of their seven games this term with their only win coming at the end of September against Rosslyn Park and even at this early stage of the campaign, another loss for either side could prove costly.