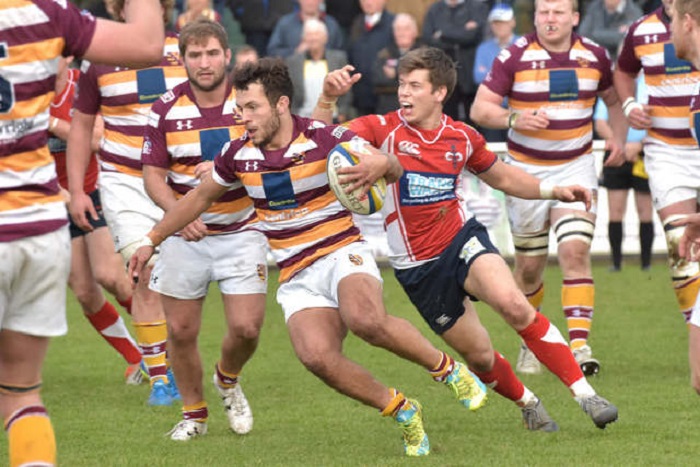 A big weekend in National League One is set to produce another instalment in the fight to stay in the third tier of English rugby with a huge fixture at Woodlands between Fylde and Hull Ionians.

This Round 22 fixture provides another lifeline for the hosts, who find themselves 22 points adrift at the foot of the table. The I’s themselves will be searching for victory, with the incentive that if results go their way, the Humberside outfit could be on the verge of moving out of the drop zone come Saturday evening.

Fellow strugglers Old Albanian also face a key game as they travel to Molesey Road to take on Esher. The Surrey side will be looking to put some distance between themselves and the relegation battle, especially as Loughborough are on their coattails. The Students are one place behind Esher, with a game in hand, however they face a tough assignment at home to league leaders Coventry.

Cov will be aiming to extend their 16 point lead at the top of the division, whilst keeping one eye on The Northern Echo Arena as fellow promotion chasers Darlington Mowden Park entertain Blackheath. Third placed Ampthill and District travel to Cambridge.

It was another tick in the box for Coventry last week. The National One league leaders eventually secured a comfortable win over bottom of the table Fylde which leaves them 16 points clear at the summit with 10 games left to play. Rowland Winter’s side have lost on just one occasion this term and since that defeat to Blackheath in January, Cov look to have recaptured their swagger.

TEAM NEWS for @LboroRugby @Heathstevens1 is back in the fold having recovered from a broken leg suffered earlier this season. He’s joined by the rested players from last week #LOUvCOV #OnTheRoad #Nat1

Loughborough Students coach Gareth Harris praised his side’s maturity after coming back from 17-0 down to draw with third placed Ampthill & District last weekend. Harris stated that his side were unlucky not to leave Bedfordshire with the victory in what has been a positive couple of rounds for the Students. Six points from their last two matches has seen Loughborough move five points clear of the drop and anything from this fixture with the table toppers would be a bonus as four of the bottom five sides play each other this weekend.

Darlington Mowden Park keep getting their job done. They may well be 16 points off the top, but Danny Brown’s men continue to churn out the results as they welcome Blackheath to the Northern Echo Arena this weekend. DMP have won their last seven games and they also have a 100 per cent home record this term so they will be aiming to continue their excellent run in Round 22.

Whilst DMP keep chipping away at Coventry, Blackheath maintained their strong campaign with a win over Old Albanian. It was a victory which pleased James Shanahan on his return to Woollams and a win in the northeast this Saturday would certainly be an extra birthday present for the ‘Club’ head coach. Blackheath are the only side to beat Coventry this term, so can they now upset the second placed side in the division?

Paul Turner was less than impressed by his Ampthill side who drew once again last weekend. The A’s may well be unbeaten in seven matches and sit third in the division, but he and his team were left frustrated by their result against Loughborough Students as they saw a 17-point lead slip away from them.

The Bedfordshire side have the chance to redeem themselves this weekend when they travel to Cambridge. Current Director of Rugby Ross Stewart has done a superb job with the Blood and Sand, but his time at the club will come to an end at the conclusion of this season due to his commitments with Northampton Saints’ academy. Coming into the helm will be England Counties and South Leicester coach Richie Williams and it looks like he will be joining a club which is heading in the right direction. On to this weekend, Cambridge lost to Rosslyn Park last time out so they will be looking for a response at Volac Park as they aim for their sixth win from their last nine matches.

Plymouth Albion’s Kieran Hallet was happy with his team’s victory over Caldy last weekend because it gave them ‘a little bit of momentum’ in their season again. Albion had a tough January due to a few postponements so to gain a win in their first home game of 2018 was the perfect way to start February. Plymouth currently sit fourth in the table, but third and possibly second place are the targets for the men from Brickfields as they take the trip to Old Elthamians this Saturday.

Preparations are nearly complete for our trip to @ElthamiansRFC this Saturday, including some last minute printing!! Tune in here for up to the minute updates. #albialbialbi pic.twitter.com/5EL57bjpA4

The hosts this weekend currently occupy sixth in the table. OEs come into this fixture on the back of two straight defeats, but the side promoted into this division last May have actually lost on just three occasions since the beginning of December which highlights how well Gavin Lach’s side have performed this term. In the reverse match against Plymouth Albion, OEs battled to a well-earned 17-17 draw and a similar performance in Round 21 would certainly put them in a strong position to claim a positive result.

Bishop’s Stortford picked up their first victory of 2018 last Saturday against Hull Ionians which was a much needed boost for Andy Long’s side. The current National Two South champions had begun the New Year with three straight defeats so to clinch a result at Brantingham Park was most welcome. Stortford remain seventh in the table heading into this game and a victory over eighth placed Birmingham Moseley would further cement their position in the top half.

Last weekend, Ciaran Moore scored twice for Birmingham Moseley but the No.8 told Birmingham Live that he felt at fault for their 20-20 draw with Esher in Round 21. The forward was yellow-carded and Esher were able to snatch a share of the points at Billesley Common, but he and his side have the chance to respond against Stortford this weekend. Moore also admitted that Moseley should not be sitting in mid-table so they must improve on their patchy form if the Midlands club are to work their way up the league standings.

Last Saturday, Rosslyn Park bounced back from their defeat to Loughborough Students with a hard-fought win over Cambridge which continued their excellent run of recent results. Park have won five of their last seven matches which highlights their brilliant turnaround considering the amount of injuries they have had which led to them sitting in the bottom three towards the end of last year. Now, Kieran Power’s side are ninth in the table and victory could see them move into the top half.

Level on points with Rosslyn Park, are their hosts Caldy. The side promoted from National Two North last April are having a really good season and their battling performance against Plymouth Albion last Saturday empathised how far they have progressed. Simon Verbickas’ men have won four of their last six games and at Paton Field, they have lost just once at home since October so the Wirral outfit maybe quietly confident of gaining another solid result on their own patch this weekend.

It has been two very positive weeks for Esher. An excellent win over Hull Ionians followed by a hard-fought draw at Birmingham Moseley means the Surrey-based side are now 11 points clear of the relegation places and they have the chance to increase that gap this weekend when they host Old Albanian at Molesey Road.

All six of Esher’s wins this term have come at home so Old Albanian will know this away trip will be tricky on Saturday. OAs are currently 12 points off safety with nine games left to play and this fixture with Esher presents a chance for Gavin Hogg’s side to try and close the gap on the teams above them. It is becoming crucial that the men from Woollams start to dig themselves out of trouble and a second win of the season over Esher could be the catalyst they need for survival.

There were certainly some positives for Fylde to take from their defeat against Coventry in Round 21. The divisions bottom club more than matched the league leaders for 50 minutes, but some indiscipline cost them and ultimately the Lancashire club slipped to an 18th loss of the campaign. It means Warren Spragg’s side are 22 points adrift of safety with nine games to go, but they have real opportunity to begin thier great escape when they host Hull Ionians this Saturday.

The I’s accommodate 14th spot in the division, but they are just five points from safety heading into this weekend. The men from Brantingham Park will be aware that Loughborough Students are entertaining league leaders Coventry so a result at Woodlands for Hull Ionains could see them move to the cusp of safety once again. The Yorkshire outfit have won just one of their last five matches which has seen their momentum fizzle out, but they could spark their bid for survival back into life with a first away victory of the season this weekend.